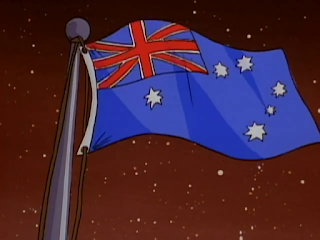 "Nobody tells Nick Tyree what to do in his own country!"

Warrior Brood is the thirty-second episode of Exo-Squad, and kicks off the Australian arc of the series. When Nick Tyree (remember him) disobeys orders and liberates Australia, Napier and Able Squad show up to try to cajole him into retreating to the mountains before the Australian resistance is wiped out by the inevitable counter-attack. He refuses, and Phaeton's response is swift, brutal, and unexpected--he unleashes nigh-unstoppable Neo Sapien / animal hybrids. Able Squad and the resistance fall back in the face of this onslaught. 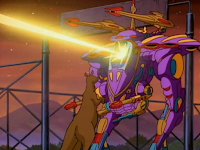 What Works: The initial series of attacks which liberates Australia are well done. You get the sense that Phaeton is stretched thin, and that Australia is a low priority. You also don't see any civilians anywhere on the continent, which has ominous overtones which don't really get explored. The tactics seem like the usual resistance strategies, luring forces into ambushes, striking from hiding places, utilizing whatever bootleg gear they can find.

It's cool to see what Praetorius has been up to since engineering the Neo Megas. Ever since Phaeton mentioned the secret base "in Antarctica" it's been a gun hanging on the wall. Neat to see it get fired. Also, from a directing standpoint nice transition from the Australian flag to the Southern Cross and then down to the base. 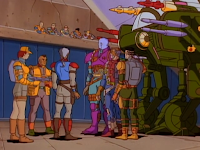 I also enjoy, as ever, the infighting between allies. This time it's the Ozzie resistance vs Napier and Able Squad, and they do indeed exchange fire. Nick Tyree is the stand-out character in this, naturally, taking it all very personally. When he declares Australia "his country" the meaning is intentionally ambiguous as to if he's saying it's where he's from, or if he's saying that it belongs to him, now. Even after Able Squad has beat his men, he still challenges Napier to fisticuffs. 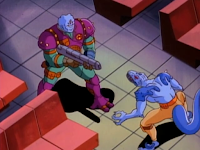 There's an intentionally strange beat where a Neo Warrior, lizard variety, gets flummoxed by Marsala before getting shot by him. Given that these things don't seem to be particularly bright, it makes sense that their behavior would have some very simple, very basic parameters. I also like a new angle on the dilating Neo pupils, this time the slitted lizard eye. 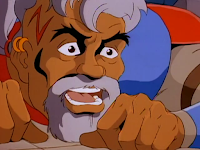 Tyree's reaction upon seeing the Neo Sapien Warriors is pretty great. That's a lot of emotion in there for a 22 minute televised cartoon. 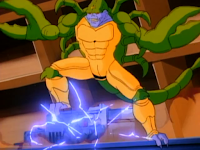 What Doesn't: Unfortunately, there are many things a bit off about the episode. From a big picture view, the Neo Warriors are over-powered. I could buy that they'd be a huge threat, but each version seems to be able to just shrug off blaster fire from e-frames with little permanent damage. That seems like too much for just mixing in Neo Sapien and Crab/Spider/Scorpion/Bat/Lizard DNA. Maybe the ones with shells, I could see, if they were ducking down. The writers definitely scale back on the invulnerability after this storyline, but by that point the damage is done and it just feels like a continuity hiccup. 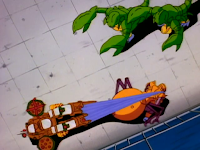 Bronski's fear of spiders feels like it's being introduced late in the game. Moreover, there's no real payoff. As soon as he mentions his phobia we know where the story's going, and he fights a spider, and in the end he still hates spiders. 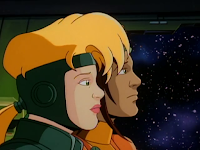 Nara getting left behind on the Cossack with Hollis is another strange choice. She's just been through the wringer, you'd think the writers would want to explore that a bit. I find it hard to believe they didn't bring a spare frame for her. Heck, she does have her own seldom-used mech! At least, to the show's credit, there's a line in there acknowledging her recent loss. 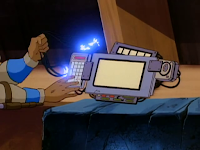 Nitpick time! Nick Tyree rips out the wires of his radio and gleefully declares that they've got "wiring problems." Really? With equipment scarce, he's gonna sabotage his gear so he can pretend not to have received orders? 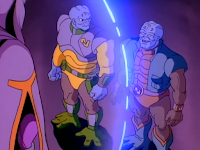 Watch For: Hey, what's Creon (Draconis' aide) doing in Antarctica? Surely Phaeton would have put him to death, and he doesn't seem important enough to clone. 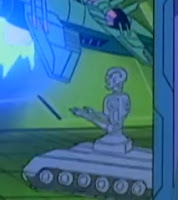 What's the deal with the little maintenance robot that wheels up to Takagi's Exo-Wing? Never seen one of those before. Almost maybe touching on the S1 dangling plot thread about sentient e-frames? Nah, probably just a designer who thought it would look cool. Still, odd choice. 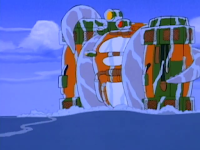 Bronski winds up in the ocean with blue tentacles grappling him. Presumably a Neo-Warrior octopus, but we'll never see anything like it again, and we didn't see one in Praetorius' lab. I'd have loved to see a proper model-sheet style design for this guy show up somewhere, but I suspect none was ever made. 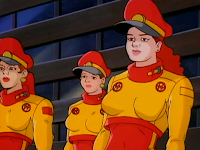 Bio: Colleen O'Reilly, again, but this time (as promised) with new animation telling the story Winfield is narrating. It works better when you can see what's going on. On the minus side, she's not in this episode at all, even as a cameo.

Overall: Decent, not great. It's nice to get some payoff for the earlier tension between Tyree and, well, everyone, as well as find out what's been going on way down south, but the threat is simultaneously too great and too nebulous. (The Ozzie resistance being antagonists means them all getting wiped out doesn't feel as tragic as it might otherwise.) Still, there are two more episodes to go, so there's every chance things might get better.
Posted by Jimtron at 11:37 AM

When the bat-sapien opens it's wings and pops his head down, first thing to pop into my head was "I'm BATMAN!"