Review: War of the Worlds, the series ep 4

Episode 4 of War of the Worlds, the series is titled A Multitude of Idols. In it, the aliens attempt to secure what they need to revive massive numbers of their sleeping brethren; radioactive waste to keep the bacteria at bay, a secure location, and many human bodies. They largely succeed at all three aspects. 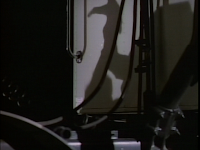 The episode opens with a reporter, clandestinely filming at a toxic waste producing plant of some sort. Trucks, loaded with radioactive waste that will be hot for a thousand centuries, are rolling over 800 miles to a storage facility. She sees them as accidents waiting to happen, and follows two of the trucks to a rest stop, where she surreptitiously interviews the drivers. After she leaves them, she just barely observes them getting absorbed by aliens. Her camera catches just enough, from between two trucks, to convince her that SOMETHING strange has happened.

Our team, meanwhile, has been alerted to possible alien activities thanks to the mutilated body of a federal employee. They know that the aliens have access to a list of radioactive waste hauling, which along with some intercepted transmissions between the reporter and her editor lets them put two and two together. There's a very silly bit where Blackwood and Ironhorse, who are rapidly emerging as the real stars of the show, pretend to be interested in hiring her to do a government documentary of some sort. She hands over her tape as an audition, and they drive off. Naturally, this arouses her suspicion even more.

Reporter and Blackwood Team both hit on the idea of locating the trucks by using the numbers painted on the roofs of the trailers. (Small problem with that - we see a clear shot of the trucks from above and there are no numbers. Oops.) The reporter uses her network contacts, the Blackwood Team hacks into government databases for satellite imagery, much to Ironhorse's chagrin. This leads both to Beeton. 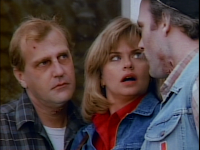 Beeton - a town abandoned in the 60's when improperly stored nuclear waste seeped into the water supply. It's the perfect breeding ground for aliens - off the beaten path (yuk yuk), abandoned, and with high levels of ambient radiation. The aliens hijack a few church picnics and get plenty of bodies, so by the time the reporter and the Blackwood team independently arrive, there are aliens (looking like suburbanites) everywhere. The reporter soon falls prey to the sickly looking truckers she interviewed before, but Harrison and Suzanne manage to avoid detection ... somehow. They actually buy ice cream from an alien vendor, which should have been a big tip off right there. Then, despite the super-high levels of radiation everywhere, Suzanne actually eats the cone. "I really shouldn't," she says, presumably referring to the calories and not the toxic levels of radiation all about them. 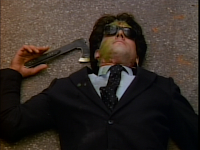 Blackwood, eventually, realizes that a town that's supposed to be abandoned plus high rads everywhere equals an alien town. His insight is confirmed when a preacher walks around to everyone intoning, "to life immortal," though he has to elbow Dr. McCullough to get her to say it back. Again, the aliens don't realize humans are among them quite yet. 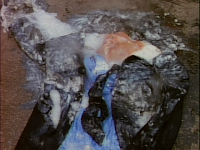 Ironhorse arrives in his civvies, chucks a tomahawk (yes, you read me right, he chucks a tomahawk) into the forehead of an alien guard. The team then sneaks in and observes aliens liberating their slumbering comrades from barrels, shocking innocent people into submission and then feeding them to the newly revived sidereal monsters. They duck out in horror and debate the best course of action for a moment until they get chased by an angry mob of aliens. Off they drive.

The team comes back with a full compliment of soldiers. Tanks, jeeps, troop transports, and armed men storm the town, but it's abandoned. The aliens have moved on. It's a major defeat for the team, and they can't afford many more of those. The now alien reporter, meanwhile, comments on rumors of 'alien activity' by informing the public that it was just military manoevers, mockingly noting that no aliens have come forward to comment.

The good: One of the Advocacy, while debating, expresses a longing to see their homeworld one last time, prompting a sharp rejoinder that Earth is their new home and that their homeworld is even now entering its death rattle. It then apologies for its lapse. I like this level of characterization. 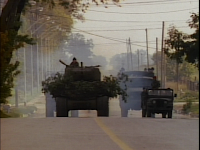 The tanks! It makes sense that, in a conflict like this, there would be the occasional military strike. Glad to see it.

The tuning fork. Harrison Blackwood, for the very first time, employs a tuning fork memory recall technique. It's a good visual and fits with his quirky nature, and we'll see it again.

The ending. A nice, dark, down ending. The humans got away with their lives ... but that's about it. The aliens revived over a thousand of their species and sent them out into the world in new bodies.

The bad: McCullough's subplot about not adapting well to Blackwood's freakish working style doesn't work. She just comes across as petulant, which is impressive because HE'S the one being unreasonable. 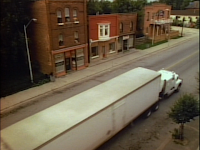 Trucks with no numbers on the trailers. If you're gonna make a big deal out of something, it should actually be there. Or, at the very least, don't show the trucks from above.

An advocate, a member of the super-intelligent alien leadership, says "nuke-u-lar" ... grrrrrr.

Hacking into the federal databases. Why bother if the team is working for the government. The reasons why the team didn't get access in the first place were not compelling, so this bit felt tacked on.

Aliens not realizing that there are humans among them. Aliens selling ice cream. Humans eating irradiated ice cream. I can go on. Long complaint short, the humans should have been instantly recognized and assimilated. The actions of the humans once they figure it out weren't much smarter. All told, smacked of bad writing. 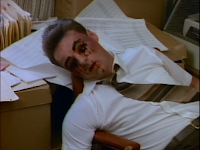 The ugly: Let's go with the mutilated federal employee. Though, he was so annoying in his 45 or so seconds on screen that it's hard to be sympathetic for him.

Overall, a relatively weak episode. Not a very smart plot; at least, not once the team gets to Beeton. Less gore than usual, probably saving money for the army to show up. A good ending, but it doesn't salvage a bad lead-up.  War of the Worlds - The Complete First Season

remains available for order on DVD.
Posted by Jimtron at 12:54 PM

To me, this episode has some of the best music of the series, especially when we first see Beaton, and when the trucks slam into the roadblock.

Ironhorse appearing in town with his tourist clothes on in priceless in this episode.

There are some really brutal scenes in this one. The images of the alien warrior STABBING it's hands into the mid-section of a human behind that curtain were brilliant and terrifying.