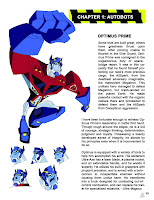 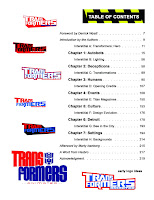 Well, it's almost time. Wednesday, August 19th The AllSpark Almanac comes out, and it's just around the corner. I know I've been hyping this book a lot, but it's only because I'm incredibly proud of the result. When I was a kid and I'd buy some crummy unofficial guidebook to something like, say, Quantum Leap, this was the kind of product I always hoped I'd get. I can't thank Bill, Marty, Derrick, Marcelo, and all the other folks who contributed enough.

A few notes on the preview. While it's traditional to do the first five pages of a book, in this instance I felt that that would be a disservice. You'd get the opening shot of the book, a two page spread of the credits, some sketches and the table of content. Even moving to the first five pages of 'content' (and I tried to make every single page, including the literary elements, content rich) doesn't solve the problem, since that would be mostly an interstitial block about Transformers: Hero, the earliest brainstorming around the project that eventually turned into Transformers: Animated. 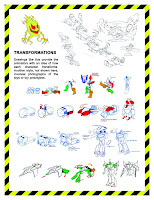 And if I skipped that, the first five pages of chapter one are all devoted to Optimus Prime. Now, I love the bossbot as much as the next guy, but that seemed like overkill. So instead, I give you Marcello's wonderful cover, the table of contents, the first page of chapter one, an interstitial page, and an episode guide page.

For the cover, [edited - the cover has been moved to the reaction thread] you've probably seen it before ... though this version corrects a slight off-model instance. The original is still on Amazon, if you'd care to spot the difference. 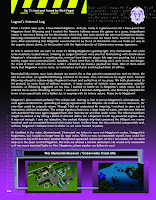 The Table of Contents should give you a good idea of how much love we gave to each topic. It's also fairly representative of how I tried to handle literary elements; in this case, I showcased some of the early logo ideas.

The first page of chapter one (actually page 15) has been shown before, at BotCon 2009, but I thought it worth repeating.

The second interstitial page, page 89, shows off the Transforms of five of the characters. Oddly, the only transformation reference for Ratchet was photos of the toy, so I wound up using Starscream's sequence to round out the page.

Finally, page 126, a fairly representative episode guide page. Lost and Found was one of my favorite episodes, and there was a request for more Lugnut in the previews so I thought why not?

It's a busy week for us though. Not only do we have The AllSpark Almanac coming out, but Bill's television appearance on LA Ink is this Thursday. Feelings Rule, the episode where Bill gets Nick Roche's cover to The Ark II permanently inked onto his skin, airs at 10:00 EST (7:00 PST), and again at 12:00 AM EST (9:00 PST) on TLC. Once again, a huge thank-you to the folks at IDW and Hasbro, specifically Hasbro's ace legal department, for putting in the work necessary to make this happen. 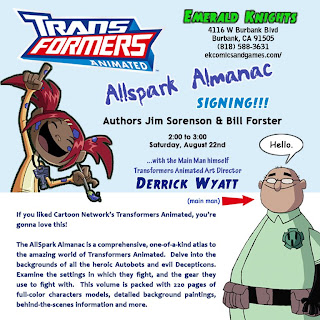 Lastly, reminder. As mentioned last week, Bill, Derrick Wyatt and I will be at the Emerald Knights comic book shop in Burbank this Saturday, the 22nd, from 2:00 to 3:00 pm. If you'd like us to sign your books, or for Derrick to sign DVDs or toys, or just to say 'hi', we'd love to meet you.

That's it from me! Tomorrow I'll post up a review thread where you can come by and let us know what you thought. Good, bad or ugly, I'd love to hear your thoughts on The AllSpark Almanac. It should be available at your good old LCS, or of course for preorder at Amazon.com.
Posted by Jimtron at 1:16 AM

The book looks very cool! I can't wait to get the book. By the way, what's LSC?

I feel like this whole book will be a teaser for volume 2! Jim and Bill, you guys have GOT to finish it up the way it deserves!

Thanks for the page on Lugnut. I can't wait to get my hands on the real book!

Sorry for the jargon, RazorFire. LCS stands for Local Comicbook Shop. Glad that you guys are enjoying the previews.

Matt, if I have any say at all in the matter, I'll do a volume 2. I think that'll depend on sales and Hasbro's interest. My fingers are crossed, anyway.

I hope that episode of LA Ink is the same one airing on Thursday up here in Canada, I really want to see the episode now!