The Napkin of Revelation 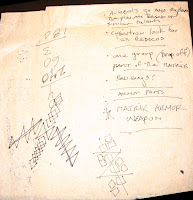 Aaron Archer's original outline for the series that would become Transformers: Cybertron, drawn on a napkin (origin uncertain), shown to fans at Hasbro's booth during the final hours of BotCon 2005. With Aaron's recent departure from Hasbro, I have decided to reveal these personal photos to the general public for the first time, though one side of the napkin previously showed up in the Transformers Vault guidebook. 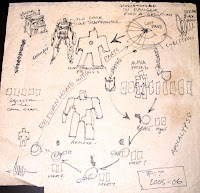 You did a lot of good during your time on the brand, Aaron, and you will be missed. I am sorry that our first run-in, at BotCon 2002, consisted of me inadvertently keeping you from the restroom before the start of a panel to ask what the deal with Movor's name was. Um, my bad.