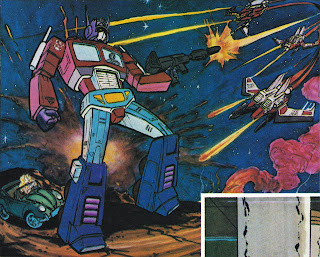 The January 1985 issue of Comics Feature ran a story on Marvel Productions, the company that produced the original Transformers cartoon. As part of this story, Comics Feature briefly interviewed Transformers story editors Bryce Malek and Dick Robbins, and included a piece of rare pre-production Transformers artwork. After learning of this story, I bought a copy of the magazine and made a high-resolution scan of the art, which is included in this post. This is not the first appearance of this particular piece of artwork, as it came into the hands of collector Alex Bickmore some years ago; you can see it here, where the corner isn't covered up by part of a Pandamonium promotional painting.

Transcribed below is the Transformers-relevant part of the interview.

Dick Robbins and Bryce Malek are two story editors at Marvel. Robbins is a veteran writer from the days of dramatic radio and live TV, who since 1972 has worked almost exclusively in the animation field, and Malek is a young man who used to work in Hanna Barbera's accounting department. It was Margaret Loesch who gave him his first writing assignment in 1980. Both Malek and Robbins came to Marvel in April of 1984, where they've been putting together the syndicated Transformers series ever since.

"It's based on a toy line," Malek says, "which a lot of Saturday morning shows are these days. They're similar to Go-Bots and about three or four other different lines. They are robots you can manipulate into jet planes and automobiles and all kinds of things."

The large number of characters in the Transformers series necessitated the hiring on of numerous freelance writers to get the scripts for the required number of episodes done on time.

"We normally would prefer to work with fewer writers," Robbins explains. "If we get a good writer to do a good script for us, we know his or her subsequent scripts will be even better. But we've been under the gun on this one. It's nice to have four or five writers for a series, but on this one we've had to have many more."

"In this case we were required to get out two scripts a week," Malek adds. "Twice as many as usual. We've had to work on several scripts simultaneously and some of our episodes are serialized. When we have a three-parter, it's not easy farming the information out to the person who's writing script #3 when you don't know what's happening with script #1. It can be pretty hectic and it gets very pressured."

Regardless of the pressure, Robbins and Malek are enjoying working on Transformers. Because the show is syndicated, they have much less stringent restrictions on depicting violence and action then they would have if it was a network show. "We can do a lot more," Malek confirms. "The violence is between the robots, so there's nothing that kids can really emulate. You can destroy a robot and then fix him up tomorrow. This show's got laser beams, crashes, explosions... it's real violent and I think boys will love it!"

The entirety of the interview is available here. Enjoy this bit of history!
Posted by Monzo at 9:17 PM

Now I want to see the Pandamonium pic! Haven't thought of that show in years!

Loved what they said, as it does remind me of that era in my life where I was a fan of anything that transformed. :)

Now if I could find video and photographs of Gemco, I will be a happy camper. :p

I love that these guys list that as a virtue. Because as a kid (and an adult) I genuinely do watch fiction and science fiction for the violence.