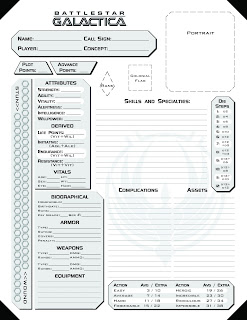 Howdy, friends, strangers, neighbors, and readers! I've been pretty busy recently with writing, life, etc, but not too busy to try out a new RPG system.  I've been playing the Battlestar Galactica RPG, which uses the Cortex system from Margaret Weis Productions.

For those of you who don't know, Cortex is a system designed to highlight the interpersonal drama of universes like Firefly and BSG. Attributes are expressed in terms of dice, and most rolls are resolved as a paired attribute / skill roll attempting to beat a static difficulty.  It's light on crunch and heavy on drama, with a system that rewards in-character flaws with plot points that can be exchanged for bonuses to dice rolling or to make minor (or not-so-minor) edits to the story.  I rather like it.  So much so that I've been playing around with making some resources for the game. 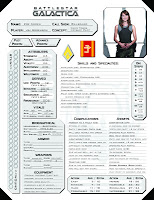 First up, my one-page character sheet.  I managed to squeeze everything on the two-page version into this except for the advancement table (our group house-rules a different system, but it's easy enough to look it up in the book.) You can see how it works out in practice with my Viper pilot Zoe 'Billboard' Arden.  Colonial flags and rank pips can be found at the BSG Wiki. If you want to photoshop an actor into a BSG uniform, you're on your own.  (One of the things our GM does is say which actor might play which PC/NPC.  I rather like it.)

As I'm playing a pilot, I looked through some of the prop websites and found some neat documents that I've recreated.  I have Viper and Raptor pre-flight checklists. 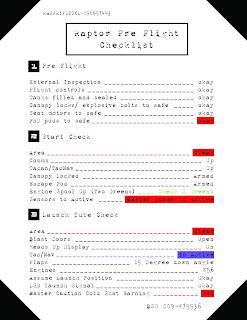 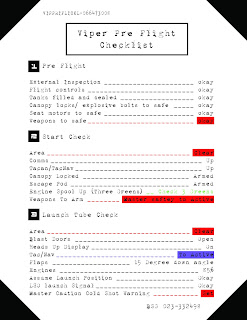 Here are some repair orders for Raptors and for Vipers. 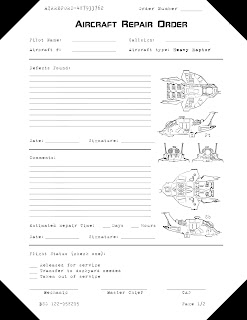 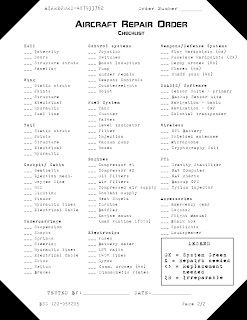 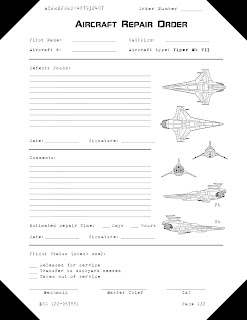 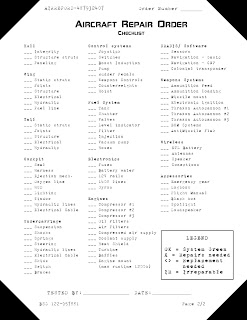 Neat stuff, no?  Check out my GM's website for a ton more BSG RPG resources.I also found this series of articles a great resource for what life on an aircraft carrier is like.
Posted by Jimtron at 5:35 PM

Nice job on the sheets. I had the checklists done up for the last campaign, but lost them in the shift of laptops.