SWTOR: The Good, the Bad, and the Butt-Ugly

Hello again friends and foes. It is time for another SWTOR update from the amazing Rob!

Sorry for the late posting today. Sick and all. So SWTOR is truly a land mark game. They sell it as a story driven MMORPG and it rocks the floor off of your expectations. If you are familiar with the Mass Effect game franchise, then all you need to know is that it is a multiplayer version of that with auto aim. For anyone who has never played the game, then what you should know is that it is highly cinematic and includes cut scenes and voice overs plus animations for all quests and even sometimes just general areas. As great as I find this game, I will admit that it is not without its faults. 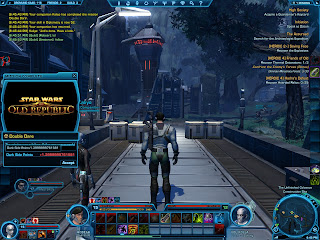 There are still plenty of bugs in the game, from clipping issues in gameplay and cutscenes, to things like irrational numbers for some stats. It is still a truly amazing game even with the issues it has. Let's not forget, this is merely the first month of the game release. Any other MMO that has been worth its weight had just as many problems at release. They all do.

Last week, I mentioned in my post that you need to make sure you create a character that you will be able to look at. I thought based on my history from playing the the beta, I knew what I was getting myself into. I forgot. Meet 'Robear'. 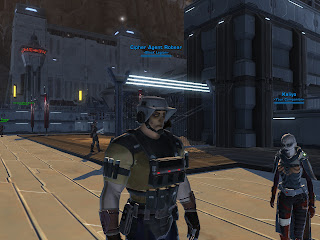 His name ... is nothing that screams 'Star Wars'. His face is hideous. He is abnormally tall. What have I done? I thought I had a good character when I initially made him, but after playing him to level 22, it occurred to me that all I want to do when I play this character is to punch him in the face. And his name ... Robear? Terrible name. After a week of watching him in cut scenes, I had enough. I created him from scratch, which was a huge pain because the guys I had been playing with were already a little higher than me and now had to wait for me to create a new character. 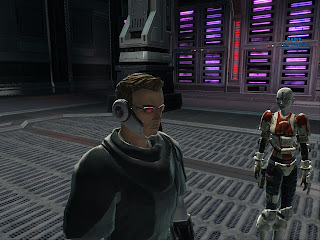 But finally, I got my new character to a playable level. Meet 'Griffon'. All the same everything as my last character, just much easier on the eyes. I have played plenty of MMOs. This is truly the first time I remade a character because I couldn't stand to look at him.

Next week, I shall discuss Flash Points. They are the most fun in an instance you will likely ever have.
Posted by Rob in Hood at 6:50 PM