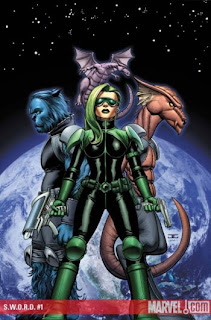 For more than a decade after his death at the hands of Minion, Death’s Head remained deactivated. But, true to maximum that only Uncle Ben stays dead in comics, he resurfaced in 2005 as a supporting character in the five-issue run of S.W.O.R.D. As Death’s Head only appears briefly, and the short-lived run makes up a complete story, I’ll look at them as a whole.

The covers are quite a mixed bag. The first three, by John Cassaday and Laura Martin, are all portrait-style: the first is a standard team-assembly of S.W.O.R.D. commander Abigail Brand standing in front ofBeast, Sydren and Lockheed. The second is co-commander Henry Gyrich with some sinister underlighting standing before an ‘Aliens Go Home’ message. The third is a semi-comical one of the little dragon Lockheed, wreathed in fire and brandishing a couple of handguns.

The last two covers are by Mike del Mundo, and have a more realistic style, albeit with a much more surreal composition. While they are both interesting to look over, I’m not sure either would have me grabbing it off the shelves (although the series was cancelled by that point). The difference in styles is jarring, although the biggest problem is the overall depiction of Beast. All five covers show Hank McCoy’s flat, feline face instead of the long-snouted version drawn by Sanders. It’s each artist’s choice, I suppose, but such inconsistency for a main character between cover and inside pages feels wrong.

Now to the story. For the uninitiated, the Sentient World Observation and Response Department is the alien-facing counterpart of S.H.I.E.L.D. From its orbital space station, The Peak, it seems to operate as a mix of Deep Space 9/Babylon 5 and Men In Black – monitoring and negotiating with Earthbound aliens.

In what seems a typical day, Abigail Brand is confronted by a number of red alerts: a fleet of Drenx pirate ships are threatening Earth; a mysterious signal has been picked up; and her alien half-brother, pursued by a ruthless bounty hunter, is seeking sanctuary. Putting the affable Sydren in charge of negotiations with the Drenx, Brand heads off to deal with her wastrel brother, Lothi, who has stolen an valuable artefact.

The bounty hunter turns out to be Death’s Head, appearing by hologram to introduce himself as a ‘freelance personnel recovery specialist’ and offer Brand a cut of the bounty. When given a flat refusal, he quickly accepts – only to activate his spacecraft’s stealth mode, blast a hole in The Peak and steal Lothi anyway.

Brand gets Beast and Lockheed ready to pursue, but first she needs find out how to overcome the stealth technology. She visits a top-security prisoner – a charming robot called Unit – who provides her with the answer. But while Brand is away chasing Death’s Head, her co-commander Gyrich is undermining her to their superiors. He begins putting into action plans to extradite all the aliens on Earth. 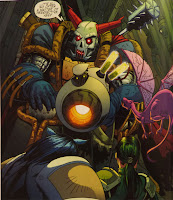 The S.W.O.R.D. agents find and board Death’s Head’s vessel, only to be caught by its owner. The real surprise comes with the scale – Death’s Head towers above them, Transformer-size. There follows a lopsided battle where Brand’s team try to stay alive (although they do manage to cost the mechanoid an optic sensor, as well as Beast suggesting the classic ‘freelance peacekeeping agent’ as a new title) before escaping with Lothi.

Meanwhile, Gyrich mobilises S.W.O.R.D. against the resident alien super-heroes (Noh-Varr, Adam X, Hepzibah, Beta Ray Bill etc) and with surprise and low cunning, manages to round up almost all of them.

Ignorant of this, and having returned to The Peak, Brand is again called by a surprisingly-cheerful Death’s Head: “Hello again, human friends. You catch me in the middle of doing a little accounting. It appears you owe me one alien, one artefact, one eyeball and whatever is costs me to refit the gaping hole in the side of my ship.” They agree a deal: the artefact in return for free passage for Lothi. Brand is then captured by Gyrich and thrown into the brig.

While Lockheed is hunted through the air vents (which explains the John McClane style of cover for #3), Beast confronts Unit, who he deduces has been putting his unique problem-solving ability to Gyrich’s service. Beast then frees Brand, and they escape with the aid of Death’s Head (who has happily accepted this rescue as a new contract).

Some of the threads from the beginning of the story now begin to pay off: the mysterious signal turns out to be a teleportation beam for Metroliths – giant rock-monsters who invade Mount Rushmore. Though deposed as S.W.O.R.D. commander, Brand feels obligated to resolve this. She attempts to communicate with the rocks as Death’s Head fights to keep them in check (in a characteristic show of dark humour, he loses his temper at being knocked down and tries to fire a missile at a Metrolith: “No deadly force, Brand said. It’s possible you could live through this, yes?”). Brand eventually convinces the Metroliths that Mount Rushmore is not a rock creature in distress and they quickly apologise.

The other story thread comes from Sydren’s ongoing negotiations with the Drenx (mainly by offering the pirates endless cups of tea). As Sydren is taken away by Gyrich’s men, the murderous aliens learn that the base is in disarray and that Unit is being held prisoner. They force their way into the detention cells and Unit (his face now adjusted from human to Drenx) helpfully tells the pirates how they can capture the entire station.

The Peak quickly and bloodlessly falls to the Drenx, who then set up an ambush for the returning Brand and Beast. The ambush is quickly reversed by the arrival of Death’s Head and his minigun attachment. While the mechanoid bravely holds off the pirate ships (“Can’t … give up … now … Just … think … of … the … bonus.”) Brand frees all the alien superheroes, who tear the invaders to shreds.

Pursued by Beast, the chief Drenx seeks help from Unit – who asks for his liberty in return. Before McCoy can stop him, the Drenx frees the robot. With a sinister look in his eye, Unit kills the Drenx with a thought, then allows Beast to re-activate his energy cage. He explains that he helped the Drenx only to ensure a peaceable takeover, but warned Brand about the ambush because he does not resent his prison. He is happy to remain as the indispensable advisor to S.W.O.R.D. while he considers his next long-term move. 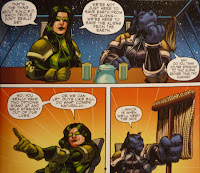 The series concludes with Brand forcing the resignation of the disgraced Gyrich, and hence becoming the sole commander. Death’s Head cheerfully departs with his fee while Brand and Beast meet with the high-commander of the Drenx fleet. In a neat turnaround they point to the number of superheroes on the planet and suggest that S.W.O.R.D. exists not to protect Earth from aliens, but to protect aliens form the Earth. The Drenx quickly take the hint and take off, leaving Brand and Beast to enjoy the Earthrise together.

The whole series makes for a really good romp. Though following the single narrative of Gyrich’s plan, there’s still plenty going on in each issue. Plot threads are nicely set-up (the Metroliths, the return of Death’s Head, the Drenx threat) and developed logically. The whole idea of an alien-specific agency has a lot of potential for story, and it’s a pity this run got cancelled.

As the main character in all this craziness, Abigail Brand comes across as the most moral, level-headed and capable. These are all good (and standard-issue) qualities for a leader, and there are some moments of dry humour in her tough-as-nails attitude, although her borderline-infallibility does make her a little dull at times.

Beast has long since been established a genius-intellect court jester, and he makes for a nice pairing for Brand, both as sidekick and romantic foil. He also gets to interact with Unit – one of the best characters in the title.

The concept of Unit is that he was created, many ages ago, but a utopian race that sought to bring paradise to the universe and realised they needed hard measures to do so. They would drop a ‘unit’ robot on a difficult planet, who would begin manipulating its rulers until it became compliant or destroyed. These utopians were seen as tyrants by other races and eventually annihilated, leaving only Unit – who must redeem their memory by bringing peace to the universe. This explains his endless patience and helpful attitude, while at the same time giving out a ‘Hannibal Lector’ vibe of a deranged genius in a cage. 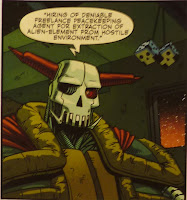 As for the other mechanoid of the series, I really enjoyed Death’s Head’s return. For a character that’s only ever really be written by one writer, Kieron Gillen did a great job of capturing the essence of the mechanoid, while adding his own touch. Nicely menacing to begin with (and the idea about making him Transformer-scale was inspired), Death’s Head comes into his best when he has Brand as a client, combining polite subservience with light disrespect in a way that seems more British in tone than Furman’s original (a mercenary Jeeves, rather than the lone gunslinger, perhaps). I’d happily read more of this character from this writer.

The character design of Death’s Head is new, and very well done by Steven Sanders. The original ‘battered body-armour’ look is given the ‘blue samurai’ colours and some impressive weapon attachments (mace, missile etc). The skull-head looks like a hockey-mask with smaller tusks and bigger horns – most of the personality is conveyed by the deep-set glowing red eyes.

The rest of the artwork looks great and flows nicely – there are a few impressive splash panels, but it doesn’t interrupt the story moving apace. It can sometimes veer into cartoony, although that’s hard to avoid when you have lots of non-humans as lead characters. And there are some lovely background touches that appear on a re-read (Death’s Head skull-themed furry dice in his spacecraft, the holographic ‘yes’/’no’ icons that appear when he makes his offer).

In terms of where this belongs in the Death’s Head chronology, my guess would be the start of his career, post-Lupex. The giant size would suggest it occurs before he met The Doctor, as does the fact that he seems to discover his ‘freelance peacekeeping agent’ catchphrase. As this is 2005, it would allow him to change his uniform, get a new face and hop over to the Transformers universe in time to begin the hunt for Galvatron (nice timing by Gillen there).

Next issue: the very last (so far) appearance of Death’s Head as he takes on The Incredible Hulk in “The Brute and The Bounty Hunter”

I thought it incredibly clever how Death's Head was set up as the pre-tf version of the character. Subtle, but there if you know the character.

I didn't think it was meant to be a complete redesign, so much as a different art style applied to his old look-- something more contemporary, but still instantly recognizable as Death's Head, yes?

at least this makes some sense with the lupex origin. I suspect, had SWORD continued then the writers may have fulfilled Furman's plan by having the time loop completed. Though we may never know that for sure.

For a concept that wasn't really THAT original (it's mentioned in the review the parallels to men in black) it does sound like a decent read. But I'm not entirely sure how this could be described as an X-Men book, beyond beast and lockheed it has very little to do with the X-Men (and since beast has as many connections with the Avengers it seems quite puzzling).

I don't like this look for DH however. The colour and body armour choices I could get behind, but the head design is wrong, too much influenced by DH2 than DH.