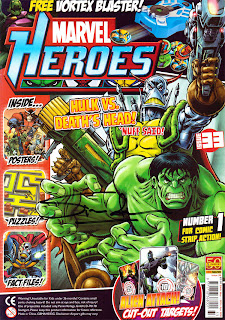 Death’s Head’s final appearance (to date) came in March 2011, within the pages of Marvel Heroes, a magazine-style format aimed at younger readers and published by Panini (who now hold the Marvel UK licence). On the cover – fighting for space among the other features and a ‘Free Vortex Blaster’ – is a pretty good Death’s Head and Hulk by Simon Williams. They are both facing the same direction, so it doesn’t really portray the promise of the caption: “Hulk vs Death’s Head! ‘Nuff Said!”.

The creatives involved were: pencils and inks by Simon Williams; colours by Jason Cardy and Kat Nicholson; letters by Tim Warren-Smith and editor Ed Hammond. The writer responsible for this resurrected guest-spot was, of course, creator Simon Furman.

This story is actually in two halves, the first part being “The Hero Inside” by Ferg Handley and John Ross. We begin with Bruce Banner meeting with a facsimile Betty Ross. Realising he has been duped by General Thunderbolt, he promptly goes green and tussles with the Hulkbusters for a few pages, before getting tagged with an electronic device that brings Banner’s consciousness to the surface.

Thunderbolt and S.H.I.E.L.D. Assistant Director Maria Hill arrive to explain the situation: an alien race called the D’Bari are threatening to conquer Earth (their own homeworld was destroyed by the Phoenix in X-Men #135). They have demonstrated sufficiently advanced weaponry to cause concern, but in order to capture Earth intact, they have issued a challenge of champions. As Earth’s champion must be human (thus ruling out Thor etc.), they have decided that Hulk is their best chance for victory.

Banner/Hulk agrees, and the D’Bari are told that the challenge has been accepted. They respond by urging haste, saying their own champion is not known for his patience. We see a familiar silhouette and a metallic arm pulling on brown gauntlets. “Especially when there’s a fee at stake, yes?”

“The Brute and the Bounty Hunter” begins on the Blue Area of the Moon, where Banner/Hulk is in the ruined Kree city, waiting for his opponent. Monitoring nearby, S.H.I.E.L.D. discover that, sure enough, there isn’t much time left before the neural regulator fails and Hulk’s personality returns. 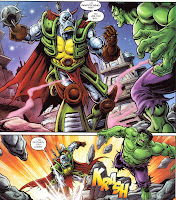 With his payment of ten thousand shanix confirmed, Death’s Head teleports into battle. He tosses Hulk around and they exchange a few punches. Meanwhile Thunderbolt is conspiring with one of his officers, Yoth, to wait until Hulk has won, then attack him while he is exhausted and weakened.

In the D’Bari ship, the commanders are arguing. Apparently their show of strength and threatened invasion is one almighty bluff – hence their reliance on hired help. One of them, G’Aspx, is repelled at the thought of using a bounty hunter (having lost his lifemate to the mercenary Tyrus Krill). He teleports to the moon and finds an old Kree cannon, vowing Death’s Head will not live to enjoy his earnings.

Back to the duel, Death’s Head’s attacks have been wearing Hulk down, and the mean, green characteristics start to resurface. Lurking nearby in a Hulkbuster suit, Yoth is waiting to strike as G’Aspx gets ready to fire on Death’s Head. But the mechanoid’s internal sensors detect the weapons-lock of G’Aspx’s cannon – he realises the double-cross, immediately cancels the deal and offers Hulk a plan. 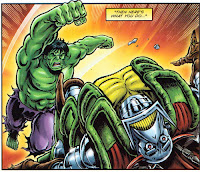 Hulk punches out Death’s Head, then leaps over him to G’Aspx. He lifts up the cannon and redirects its fire to the orbiting D’Bari ship, ending their threat. Back on his feet, Death’s Head returns the favour by blasting Yoth before he could attack.

Yoth confesses all, and Death’s Head offers Hulk the chance for payback. In the S.H.I.E.L.D. base, something teleports behind Thunderbolt and a large green finger taps him on the shoulder…

It’s easy to pick holes in this story: would Earth really be threatened by a D’Bari? Is Hulk really the best choice of champion – especially without the power of his monster rage? If Hulk lost, how were S.H.I.E.L.D. planning on telling everyone on Earth they had pack their bags? For a story like this, I guess the only important question is: does it entertain? And for that, I’d say it earns about half marks.

For a 13-page story, far too much time is spent setting up the premise (which, as I’ve noted, seems pretty thin). It doesn’t take much to put Death’s Head’s against an opponent – the only motive he needs is a contract. Setting up the D’Bari plot means we only get a few pages of the headline fight – and that doesn’t really get beyond the introductions.

The double-double-cross is trademark Furman, as is Death’s Head and Hulk trading opponents. I’m not sure there’s enough space to make it work here, and perhaps cutting down to a single act of treachery might have given the story a bit of needed elbow-room.

Moreover, there is something of the deus ex machina about how this is resolved. Death’s Head displays some very specific sensors to pick out, not only a threatening weapon, but the specific race aiming it. He also manages to talk sense to a half-crazed Hulk very quickly.

While it’s great to see Death’s Head return (there really isn’t much he won’t do for ten thousand shanix), the character does little more here than go through the motions. While the way he turns on his employers is fair enough (if a little sudden), his initial tactics against the Hulk lack his usual cunning. In a straight fight, Hulk must surely be his superior in power, yet Death’s Head deals with him as if he were little more than, say, Backbreaker. There’s also a little too much tough-guy and not enough dry wit, so I don’t think he’ll be winning over many new fans from this cameo.

Simon Williams’ artwork is nicely rendered, the inking is solid and the colours are strong. Death’s Head’s appearance is equal to many of his previous stories and a lot of respect is being paid to the character, including some of the original touches (such as the raised mechanical eyebrow). The movement in the panels seems oddly two-dimensional: the protagonists don’t seem to be really hitting each other with any impact. I know this has a younger readership, so perhaps has to tone down the violence, but Hulk and Death’s Head are reeling from punches that don’t even seem to connect. 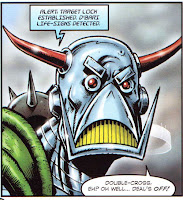 In terms of Death’s Head’s chronology, this story struggles to find a place. He is human-scale and in his original uniform, so unless is happened between his encounter with Doctor Who and Dragon’s Claws, it presumably occurred right after he was stolen from Lupex, but before he became Transformer-scale. It’s probably not worth worrying about, since I assume the ‘Marvel Heroes’ stories are outside regular continuity.

And that concludes my Death’s Head reviews. It’s been great fun to revisit these old issues, and I’ve gained a new appreciation for a much-overlooked character. Thanks to all who took part in discussing the adventures of everyone’s favourite freelance peacekeeping agent. I hope you enjoyed it, yes?

Chuffer, it's been a pleasure to read these reviews, and a privilege to get the chance to host them. Thanks for a job very very well done. I've learned new things about the character and the wider world surrounding him (like Dragon Claws and the state of the Who book) and enjoyed your always insightful commentary. If there are any other series or characters that you'd like to examine, you always have a home here.

Thanks for all the DH reviews Chuffer, it's been great revisiting these stories! :)
(I see you probably got this issue from Simon himself on e-bay as well, as it's signed like mine :) )

Oh, one more thing, Death's Head has recently made another appearance: in the Marvel Age retelling of Infinity Gauntlet. I believe it was issue #3. No need to get it though, he appears in one panel only, with no dialogue. And the comic wasn't very good... at all. But yeah, DH is in it :)

Hans, I'd love to see that panel if you know of a nice URL.

One this this one off showed was that there is definitely still mileage in the character. And since he's a time traveller surely they could do a storyline with his "older" self interacting with modern characters. How long was he working for the TVA? Did they time travel tech in 8163? And there is always the fact that we are talking about MARVEL, they have a whole freaking multiverse to choose from, I'm sure a mechanoid could have survived the cancerverse or the zombie universe, since he's not really alive in the first place.

Thanks Jim, Hans and Nytetrayn – I hope this isn’t the last we see of the character.

And yes, I couldn’t find Marvel Heroes #33 in any newsagent when it came out (I guess that Vortex Blaster really had them flying off the shelves!) – luckily Furman had stocked up on them, so I could find one on eBay.

Jim (and Chuffer): sorry it took a while, but I finally came around to uploading the page. Here it is: