Death’s Head Review: What If #54: What if Minion Had Not Killed Death’s Head? 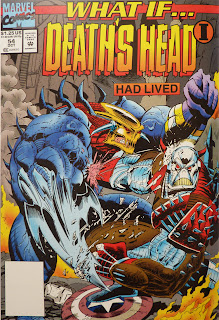 The final appearance of Death’s Head (for a dozen years, at least) came in the pages of the ‘What If’ series. The old creative team is reunited – Simon Furman writer and Geoff Senior artist – with Janice Chiang letters, Sarra Mossoff colourist and Rob Tokar editor.

The cover, also by Senior, is big and brash: an over-muscled Minion goes toe-to-toe with a spikey-armoured Death’s Head. Beneath them are items from fallen Marvel heroes: Captain America’s shield and War Machine’s helmet. The caption asks, “What If … Death’s Head I had lived”, which does the job, although I would have added a question mark, and using a big, thick Roman numeral does immediately make you assume it means “Death Head II” (which makes no sense).

It’s a strong image – both protagonists are tearing into each other – although nothing like as gory as some of the Death’s Head II covers. Minion’s blade looks to be doing no more than surface damage to Death’s Head’s face, while the mechanoid’s fist appears to be punching into pink jelly, rather than flesh. Death’s Head’s legs are also bent at an impossible angle, just to fit them into the frame.

Manhattan 2020. In film-noir style, Dr Necker is walking through a dark, rain-streaked alley in a hat and trenchcoat. She rendezvous with Spratt, who introduces her to Death’s Head, rebuilt after his near-death at the hands of Minion. We are treated to a full splash page of the mechanoid’s third uniform, which mostly consists of enormous arms, extra guns and lots more spikey bits. His head is unchanged and looks quite small atop this titanic construction.

Necker reveals that Minion has (somehow) become a liability for A.I.M. and offers him the chance for revenge. Though angry at Necker for setting Minion after him, Death’s Head is prepared to listen – but not for free. As Spratt reminds him, there’s no profit in vengeance.

The narrative is picked up by Uatu the Watcher, who reveals this prologue to be a ‘What if’. He recaps the story of the Death’s Head II limited series, then speculates what would happen if Death’s Head had teleported away a split-second before Minion killed him.

In this universe, Minion forgets about the escaped Death’s Head and goes on to assimilate and kill his next target, Reed Richards. However, without Death’s Head’s body for Strucker to possess, there can be no Charnel, so Minion is left waiting for a threat that never materialises. Instead, Strucker lures Minion into a trap and possesses him instead. There follows a classic sci-fi monster-attack sequence where Minion/Charnel destroys an A.I.M. installation.

This brings us up-to-speed with the prologue: in a shipwrecked freighter that serves as an atmospheric office, Spratt is counting out Necker’s money as Death’s Head accepts the contract. He requests use of a time machine and a really big gun.

Travelling back to 1992, Death’s Head convinces the grief-stricken Fantastic Four Three to help him, since all that remains of Reed is now trapped in a killing machine. Using similar powers of persuasion, he recruits Captain America, War Machine, Luke Cage and Namor to his cause. Necker is impressed at gathering so much power for free, which Death’s Head attributes to his understanding of the ‘super-hero mentality’.

We jump straight into a full-on superhero dogpile on Charnel. They land some good hits on the creature (I especially like Sue Richards’ nasty method of creating a force-field inside Charnel’s body, then popping it), which concludes with Thing dropping a building on him.

Of course, this has only succeeded in making Charnel mad! Having adapted to the attacks, he fights back, killing the heroes in quick succession (once again, a special mention for his means of dispatching War Machine – a narrow blade configuration through the eye slits).

Death’s Head has so far remained on the sidelines, allowing the superheroes to sacrifice themselves, so Charnel is worn down (something Necker views with admiration). He now steps forward, toting a gun the size of a Buick, and blasts Charnel. He follows up with an attack that uses everything in his arsenal, including gouging Charnel with his tusks. Though outmatched, Death’s Head goads Charnel that he is too thuggish to access any of his 105 personalities to win the fight. 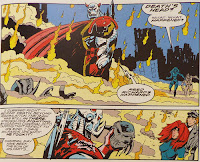 Charnel takes the bait and taps into Reed Richard’s intellect to ensure maximum suffering for Death’s Head. Before he can strike the final blow, he freezes, allowing the mechanoid to decapitate him. The escaping energies cause Charnel to spectacularly explode.

In a neat reversal, Death’s Head is left holding Minion’s skull. He explains to Necker and Spratt how he tricked Charnel into giving control to Reed Richards’ personality and ponders the nature of heroism, “Struggling against impossible odds, risking almost certain death to help those in trouble … I just hope it’s not catching, yes?” 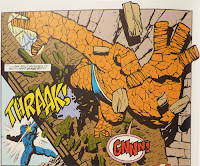 It’s a fitting swan-song for the character. Death’s Head is allowed to show off his sardonic, cool, ruthless personality for the last time, as well as being granted a plausible victory against his nemesis, using cunning rather than brute force. And at the story’s end, he finds himself no wiser or nobler, with just a shrug for fallen comrades and an eye for the next paycheck.

Furman admitted that he found writing this to be a “deeply satisfying and cathartic experience”. Aside from sparing his creation at the expense of its successor, it does give him the chance to demonstrate how he would have written the all-superhero brawl against Charnel. Though hardly original, I liked the battle. There were some nicely inventive ways for the heroes to attack (and get killed) by the monster (compared with the fairly blunt methods used in 2020 Vision) and Death’s Head stays in character as a cynical manipulator. It could be argued that Minion is also in character as a superpowered machine that can’t be beaten by any other Marvel superhero, even some of the greatest, which may also have been Furman’s point.

Though clearly favouring Death’s Head, Furman does a good job of working with the established story: Strucker’s grudge against A.I.M. is maintained (and expanded upon, given we actually get to see Charnel destroy some installations in this version) and the inclusion of Reed Richards as target #106 is good continuity. It also makes for a satisfying twist: Death’s Head gives Reed’s personality control over Minion, just as Reed gave Death’s Head control over Minion in the ‘true’ story.

Senior’s artwork is very good, though a long way from his best and perhaps his art isn’t suited to the reduced colours of the US print. His depiction of movement and action is still great, however, so there is plenty to enjoy in the explosive, brutal slugfest against Charnel (although I wasn’t convinced by the squishy pink-gore of the cyborg’s insides). Charnel’s attack on the A.I.M. installation is also very well handled – single-frame depictions of the sudden assault that match the pace of the text and keep the attacker out of view until the final reveal.

Death’s Head’s new look is a parody of the fashion for big guns and big muscles, but Senior keeps the augmented mechanoid looking formidable, rather than ridiculous. Compared with the bloody and overly-detailed work of the Death’s Head II series, the artwork already seems to be out of step with its contemporaries, but it’s certainly no worse for that.

I actually consider this the 'true' version myself. Why wouldn't Death's Head have teleported away to safety upon losing the battle against Minion, after all? :)

Besides, Simon managed to tell this tale in one issue, where Abnett needed four, making a nice point against decompression.

The cool thing about the What If's was how audacious the writers could be with them. Any character could at any moment die in one of these- anything could happen.

It's good Furman was able to say his piece with this one and allow us to enjoy another Death's Head story. Not so good that the character wasn't seen for so long.

agree with all the above, nice swansong for the original and a far more entertaining version of his final battle.

It demonstrates one of Furman's biggest strengths, taking someone else's plot and running in a different direction with it. He did it with the US TF series, and Transformers the movie.

I do wonder if he'd had more say in the outcome of the original death's head II mini whether Minion would have defeated Death's Head at all?

I'd certainly like to see a return of this version, but maybe with a scaled down version of the armour. As you mention in the review, it is a bit over the top with muscles and guns, fine in the 90's but a bit too cliche now