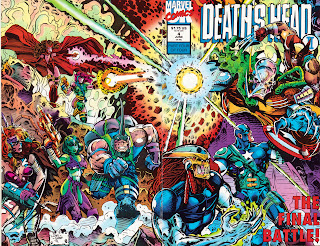 After some previously mediocre covers, this one is a treat. In a wraparound cover, the Charnel monster is fighting Minion, Tuck, Necker and an assortment of Marvel heroes. Charnel looks menacing (and recognisable as the original Deaths Head), the bursts of gunfire and magic give some vibrant colour to the image, and everyone is strongly portrayed. Even the caption, “The Final Battle!” adds to the drama.

A couple of complaints: some the combatants – notably Minion and Rhino – don’t seem to be facing their enemy. It could be argued that they’re manoeuvring or flanking, but it doesn’t look very dramatic. Another problem is that Liam Sharp elected not to draw Charnel’s legs, settling for a brief outline that is coloured the same as the background, and so makes him look like a floating torso.

We begin in ‘The New York Wasteland’ of 2020. Not the 2020 we saw last issue, but a new future that will come to pass with Charnel ascendant. Four of Earth’s heroes – Spider-Man, Daredevil, Dr Strange and the Punisher – have adapted to this tough world (mainly by adding lots of guns and pouches to their uniforms and, in Spider-Man’s case, growing a pony tail).

The Punisher’s War Journal narrates the captions: the defeat of Thor’s people by Charnel means they have no hope for victory. They are attacked by hordes of featureless demon-drones and then by Charnel himself – who is now in the form of a giant red spider-creature. Daredevil and Dr Strange are quickly killed, but Spider-Man manages to swipe a disc from Charnel’s chest before his is also slain. The Punisher is offered mercy if he returns the disc, but he flings it away to safety. In a rare moment of subdued storytelling, we see only a distant explosion with the caption: “Punisher’s War Journal ends.”

The disc is collected by former-villain Rhino and brought to the bunker of this era’s Avengers: Wolverine, She-Hulk, The Scarlet Witch and Captain America. Mister Fantastic, who has been trapped in a shapeless putty form, outlines the plan: the disc is a time-travel device and they will travel back to 1992, when Charnel first appeared and was at his weakest. The five remaining heroes time-jump and Reed wishes them luck. 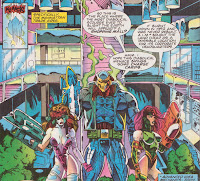 In a New York shopping mall, 1992, Minion arrives with Tuck and Necker. They have armed themselves with a couple of enormous guns and, continuing the strange fashion decisions, Minion has exchanged his peasant tunic for a leather bolero jacket. Minion is being flippant about the impending confrontation with Charnel, which irritates Necker and causes Tuck to defend it as ‘just his way’.

Minion is suddenly attacked by the 2020 Wolverine, stabbing him through the stomach before he breaks off a claw against Minion’s multi-purpose arm (that would be his unbreakable claw – and it’s mentioned in the story that this Wolverine still has his adamantium). Wolverine seems merely bemused at this, and Captain America calls for a truce.

The protagonists soon compare notes, and conclude the quasi-Oedipal running gag that Dr. Evelyn Clarice Sarah Necker shares a middle name with Captain America’s mother. They realise they all want the same result, although the Avengers are fighting to end their future, while Minion is trying to protect his (and can’t see the appeal of their self-sacrifice).

Charnel materialises – the Strucker/Death’s Head hybrid that destroyed A.I.M. – quickly clobbers the Scarlet Witch, kills She-Hulk and bats away Rhino. Minion faces him, and they both sense their connection with the original Death’s Head – before Charnel blasts him too.

Wolverine leaps in, then Captain America and then, walking from the fires like the liquid Terminator, Minion re-joins the fray. Necker retrieves Rhino, who sheds a tear for She-Hulk, and Tuck revives the Scarlet Witch, who hits Charnel with her hex power. Unexpectedly, Charnel drains her hex energy and uses it to transform himself into the unstoppable juggernaut of 2020. His awesome power is demonstrated as he effortlessly annihilates Captain America, Wolverine and Rhino. 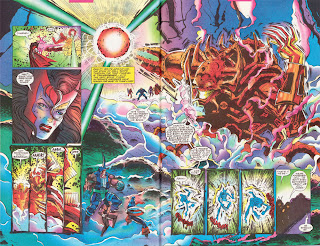 In a desperate effort, Minion leaps at Charnel and attaches the 2020 time-travel disc next to the 1992 version already on Charnel’s chest. With one final hex bolt from the Scarlet Witch, both discs are activated – one set for prehistory, the other for the thirteenth century – and Charnel is torn apart. Minion claims to be an expert in dealing with split personalities.

With Charnel destroyed, the 2020 Scarlet Witch happily fades from existence. When Necker tries to take Minion home, he refuses, saying he doesn’t believe she ever intended to pay him, or that the future A.I.M. now has the means to do so. Angrily destroying her gun, he claims that the entire mess was her fault and she should consider the blood on her hands.

Stealing a truck, Minion and Tuck drive away, as the present-era Avengers and Fantastic Four arrive. In no mood to explain, Necker time-jumps away. The final page has Minion’s truck, pursued by a Quinjet, Fantasticar and what appears to be The Hulk, as he promises Tuck, “action, adventure and heinous intrigue – and that’s just on the subway. Whatever happens – I can promise it won’t be dull!”

And so ends the Death’s Head II limited series. Having lined up all the pieces in the previous issues, Abnett delivers a solid tale. The action was handled well, and that’s pretty much all there was for this story.

Taking the series as a whole, I was less impressed. The idea is a sound one: title character is created to battle an destructive evil force and, after a few turns in the road, eventually defeats him. As an introduction/origin story it could have worked very well, especially as the original Death’s Head (or at least parts of his body) are worked into the final battle.

The problem is that, after four issues, I am still no closer to know anything about Minion. In the first issue, he was a blank slate; and in the second issue, a blanker one. By the final two issues, there was no trace remaining of the Death’s Head personality, but nothing had replaced it. He haggles relentlessly over his fee in issue three, but seems uninterested in payment by issue four. He scorns the suicidal heroism of the 2020 Avengers, but then joins in anyway. Flippant wisecracks are fine as a trait, but every character needs a motivation beyond simply moving to the next page.

The way he defeats Charnel is neatly done (although the idea that Minion is an expert in ‘split personalities’ doesn’t bear close inspection) and the time-disc as a MacGuffin is well-played. It might have worked better if Charnel had been in his original form – and very obviously composed of two halves – but it’s a good ending (and conjures up the intriguing possibility that Death’s Head’s original body has been banished somewhere in prehistory…)

As I mentioned previously, the story arc of confronting and defeating Charnel more properly belongs to Necker. Although she takes a back-seat in this issue, and quickly departs the scene before we can properly register if she has learned anything, or is remotely upset at having lost her project.

Tuck actually manages to do less this issue than previously, and it’s made no clearer why Minion needs or values her as a sidekick. The one interesting point is when Tuck tells Necker that his attitude is ‘just his way’ – having a partner who can understand his jumbled personalities would be an asset, except we have no reason to believe that she knows Minion any better than Necker, or has any sway over him. 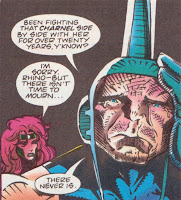 In terms of storytelling, the switch to an alternate future is unexpected (although less so than the Robin Hood planet). Alternate apocalyptic futures can be fun – everyone gets to look a bit meaner and be killed at random – and Abnett does well with it (although from a visual point of view, I’m not sure if ‘meaner’ translates to ‘add more pouches’).

Sharp’s artwork is probably the best it’s been so far – he seems to do leaping better than running, and the all-action nature suits his style. In terms of character design, both versions of Charnel are suitable horrific (I preferred the unholy hybrid original to the larger ‘alien queen’ version) and there’s plenty of gore, magic, gunfire, explosions and shattered scenery filling the pages. There is also a surprisingly touching display of emotion on Rhino’s face as he mourns She-Hulk. 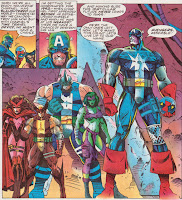 Some of the character costumes are more questionable. Most of the future superheroes wear a vertical stripe from chest to crotch, which gives unity but does look peculiar and turns Captain America’s star into a comet. Rhino’s seems not to be wearing the all-over suit that gives him his powers (certainly his arms are bare) and everyone seems to be tattered and bandaged, in modified uniforms, except for the Scarlet Witch, who has a pristine version of her original costume.

Despite his healing factor, Wolverine is among those wearing bandages, and the scene where he breaks off a claw is an example of the writer trying a little too hard to make Minion the toughest-hero-of-them-all. Which, to me, sums up the whole problem with Death’s Head II.

can't argue with the complaints about this issue, or the series in general. too much "need to get from A to B" moments, with zero credible motivation.

Tuck is nothing more than a swimsuit model, and while it could be argued she "bonded" with minion while he was an "outlaw", it is extremely tenuous that she adds more than eye candy to the story. Particularly when you consider that Neker probably functioned better as an eye candy partner anyway.

I do quite like some of the future costume redesigns, Punisher, Spider-man and Dr Strange work very well, like you said, captain america not so much.

I was also perplexed as to how the Scarlet Witch got through the whole thing unscathed, at least compared to everyone else. Almost as if the artists couldn't actually draw her with tattered clothes?!

And I'm in absolute agreement that too much effort was made to make Minion look tougher than everyone else, to the point that even reading this back in the 90's I rolled my eyes and said "oh come on!".

One thing I did not pick up on first time around, and this gives me hopes a new Death's Head with the original personality could return, was that charnel was split, body from mind, across time. If death's head's body could somehow reboot....