Wanted: Galvatron - Dead Or Alive Part 1 was written by Simon Furman, drawn by Geoff Senior, Coloured by Steve White and Lettered by Anne Halfacree. This was the first UK originated story for nine issues - the previous eight were the US issues detailing the trauma surrounding the death of Optimus Prime and Megatron once again having trouble with Predacons. With Optimus Prime still dead and Megatron missing in action Furman picks a a good time to catch up with the future portion of the storyline and check in with the movie era characters.
The cover was also by Senior (quite obviously so) and is of a very angry looking Rodimus Prime. Sometimes Senior's art-style works better for action shots than showpieces like this but it is certainly not a bad image. The anatomy is a little imprecise but here is a lot of emotion here (Senior's strong suit) and Rodimus is well-depicted and on-model, with a certain amount of artistic licence.
The issue opens with a wonderfully evocative image: a wanted poster, bearing the likeness of Galvatron and offering a reward. As a splash page this is unusual but immediately intriguing. We find that this poster has been put up in a bar on the robot planet of Elpasos, and, in contrast to last issue, we are back in the (then) future, 2007.

A horned and armour plated mechanoid, known as Death's Head, sees the poster and asks the bartender what it means. This allows Furman to retread the Galvatron/Rodimus Prime battle from the end of Transformers: The Movie, but also to fill in the intervening year. We find out that Rodimus searched unsuccessfully for Galvatron's body but was forced to abandon this when Shockwave (so he survives to the future then? Or will we get further time travel to

put this in doubt?) gathered the remaining Decepticons and attacked Cybertron. Rodimus, unable to continue his search for the Decepticon leader, is now offering a reward for his capture or destruction.

Death's Head immediately takes off to find Galvatron and we get a lovely piece of character development where the bartender demands he pay for his drink and comes off very badly. Death's Head claims to have some kind of moral objection to being called a "bounty hunter" by the bartender, preferring "Freelance Peacekeeping Agent" but really he is just a thug who wants a free drink.

Death's Head works out that since Scourge and Cyclonus were Galvatron's lieutenants they might know where he is so he heads to Cybertron to track them down. We find them complaining about Shockwave's orders before Death's Head arrives and takes them both down in short order. Scourge makes the mistake of calling Death's Head a "bounty hunter" and suffers suitable retribution. After offering token resistance Cyclonus crumbles cretinously and lets Death's Head know about Ga 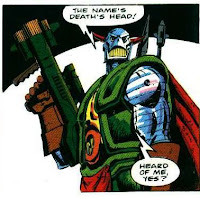 lvatron's time-jump equipment, which seems to offer the best solution as to his whereabouts. The issue ends with Death's Head preparing to jump to the distant past of 1987.

This issue is something of a landmark among fans of the UK book because it introduced Death's Head, a perennial favourite, and with good reason. The intention to create a breakout character with the "freelance peacekeeping agent" is clear without being obnoxious. The rights to Death's Head were secured by Marvel and he had his own run of comics for a while without ever becoming truly successful but he fits right in to the Transformers universe and his introduction is not grating in the way that spin-off generating stories sometimes are. It helps 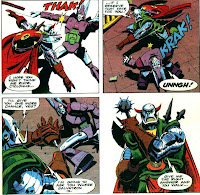 that he is tied directly into a major ongoing plotline: the fate of Galvatron.

With the Prey arc somewhat underwhelming, it has been the time-jumping shenanigans of the future Decepticon leader that have provided the truly compelling narrative and with this this issue we can see that it will be back front and centre. Death's Head is interesting enough by himself, but the prospect of him interracting with all our favourite characters on Earth is very exciting indeed.

The story as told is simple enough. Furman is really just moving his new pieces onto the board in order to start a new arc, but even in this short appearance Death's Head is such a strong presence that we immediately know who he is. Senior's art goes a long way to make him distinctive: he is clearly robotic but obviously not a Transformer, and, obviously the skull-like face that gives him his name is instantly recognisable. While some of the idiosyncracies that make the character a cult classic are not fully realised yet, Death's Head is such a strong central figure that this issue cannot help but be a classic. 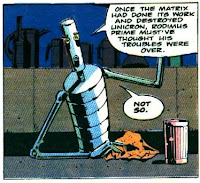 a book where most of the characters are toys long before they ever made it to the page. Death's Head, as mentioned, is particularly vivid, but I feel special mention must also be given to the robot bartender, again obviously mechanical, but spindly and so clearly not a Transformer. I have always been entranced by the conceit in these stories that the Transformers are in no way unique. The idea that the universe is brimming with mechanical as well as organic life is an original and exciting concept and it is issues like this that bring it to the fore.
Furman reminds us that Transformers is sometimes a full-on space opera with winning style and an intriguing central character. I'd be looking forward to the next issue if I hadn't already read it so many times before. In only a few pages Death's Head's arrival has been one of the most interesting developments for a good many issues. More from everyone's favourite hypocritical bounty hunter next week, yes?
Posted by Bishbot at 4:12 AM

Death's Head in his Transformers stories was a joy to read. My favourite stories in Marvel UK were those with Death's Head. I also liked the Ultra Magnus and Galvatron match-ups. It is a shame that Furman had to abandon the match-ups to write the awfully mindless Time Wars arc. A pox to editorial ditates!!!

I have been aware of a Death's Head graphic novel that Furman and Senior did called "The Body in Question". Do you have it? If yes,is it worth hunting down?

I loved this issue (and even saw the television adverts for it – the only time I remember doing so for the UK comic, so they must have had high hopes for it). Death's Head it fitted so effortlessly into the storyline, and his battle with Cyclonus and Scourge is exciting (considering how powerful they were set up to be in Target: 2006) and fierce (for a kids' comic of that time). Oh, and a correction – I think it was Scourge who calls Death's Head a 'bounty hunter' and suffers the consequences (something that becomes important in a later issue).

Another thing about Death's Head – was it certain that he was intended to be a breakout character at this stage? (it must have been more than a year before he got his own title). I know that Marvel secured the rights to the character, but I assumed that was just a shrewd move, and if he hadn't been so popular, he would have just ended up a memorable supporting character like, say, Centurion.

And yes, ‘The Body In Question’ is definitely worth a read. Some lovely artwork by Senior and provides a nice end story to the 10-issue Death's Head series (if you ignore the horrid Death's Head II).

"The Body In Question" was reprinted in the second volume of the "Death's Head" trade paperback. Copies appear to still be available at Amazon: Volume 1 & Volume 2

thanks for the link to AmazonUK

I hope AmazonUK can ship to this side of the pond

It's also worth mentioning how awesome it is that we get another recap of Movie events, and just like in Target: 2006, it occurs in an issue with Geoff Senior artwork. When I first read the British stuff in the Titan trades about 8 years ago, I wondered if this was a conscious decision on Furman's part, since Senior seems to be the only regular TF artist who could consistently make the Transformers he drew look as good as or better than Sunbow's animation. Of course, said quality may just be my opinion, but the only time I recall that not being the case was in the '88 Annual story 'Altered Image', done by Lee Sullivan (correct?) while Senior was off the book.