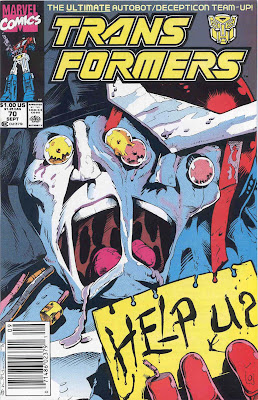 The Price of Life! is the seventieth issue of the US G1 Marvel Comics run of Transformers.  As ever, Simon Furman has penned the script.  Andrew Wildman stays on as artist, as indeed he will for all but one more issue of the series.  Stephen Baskerville joins the US ensemble as inker, and what a difference he makes.  Nel Yomtov does colors, Rick Parker letters, and Rob Tokar becomes the new editor.  It's a great line-up, and they produce an appropriately epic storyline.  The cover is by Wildman.

The cover is perfect; a close up of the Ratchet / Megatron fusion screaming in agony, holding up a sign saying 'help us.'  The image is grotesque, but in a good way.  They look like they're in agony, and yet could rip you to shreds.  For a bit of ironic humor, look to the top of the image.

The issue starts exactly where the last issue left off.  (In fact, I'll talk more about that at the end.)  The Megatron/Ratchet hybrid has stepped off the dimensional portal, lumbering towards Optimus, Nightbeat, and Waverider.  While they all stand around, numbed by shock, Kup happens by and takes decisive action, shooting at the creature.  This spurs Megatron to action, despite Ratchet's protests.  It shambles off into the corridor, leaving the Autobots dazed.  Kup wants to go put it down, but Prime insists that they have to try to save it.  The dialogue here is terrific, with both Kup and Prime raising excellent points.  I also love the monster's attempt at speech; "DHH AWABUS!" it crries as it shoves Kup, Waverider, and Nightbeat into a wall.

Prime ends by musing if his risking everything to save Ratchet isn't exactly what Grimlock is doing.  Cut to Grimlock, who is hacking and slashing his way through the mechanical jungles of Hydrus Four.  Grimlock's bumbling guide gives the rest of the exposition for the issue (Nightbeat had awkwardly outlined the events leading up to the Megatron/Ratchet monster earlier in the issue) while setting up that there were three patients given Nucleon.  Grimlock battles the first patient, a zombie-ish mechanoid floating like a hanged man above a mauve sea.  A cloud-covered blue moon completes the picture.  It's all very nicely done.  In the end, Grimlock kills the creature, but he takes no pleasure in his victory.  "This not warrior's work.  Me surgeon, cutting away diseased tissue!" he muses. 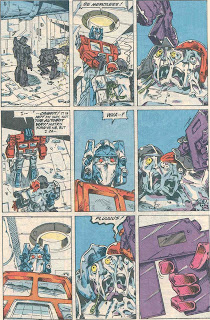 Meanwhile, on the Ark, Megatron has forced his way into the engine room and is tearing things apart even as the Ark prepares to insert itself into Earth's orbit.  Kup threatens to relieve Optimus of command if he doesn't act.  Prime, looking at his unhappy warriors, reluctantly takes Kup's weapon and smashes his way in.  Much like Grimlock, Prime takes no pleasure in his battle, but reluctantly defeats this creature.  The emotional climax comes when Prime puts the gun aside, and the creature pulls it back up and begs for death.  "Pluuuus!" it cries, as Optimus' finger twitches.  Powerful stuff.  I love the looks of despair and disgust on the faces of the Autobots after Kup threatens to invoke the Crisis Act.  Optimus clearly looks to them for support, and it's clear that no support is forthcoming.

Grimlock approaches the island holding the spring of Nucleon.  The second guardian appears, an underwater mechanoid with a nifty design. It too cries things like "non must feed" and "defend the well."  As the TF Wiki points out, that latter phrase can be read in two ways, both appropriate.    The third guardian is a sad, pathetic little dying creature.  He points out that Nucleon made his 'friends' crazy and cursed him to a more painful death than he would otherwise experience.  What, he asks, will it do to Transformers?"  Grimlock realizes he can't subject his Dinobots to this, not without some assurances that Nucleon is non toxic for Cybertronians... and tests it on himself!  It energizes his circuits, making him feel more alive than ever, and so he begins to revive his crew.  The tiny dying mechanoid sits in the corner, muttering that time will tell.  We get another exciting battle, more pathos, and some great foreshadowing of things to come.

Prime couldn't do it; Megatron/Ratchet lies on a bed in the medical bay. Fixit (we're getting low on medics, here) reports that Ratchet's life can be saved, prompting Prime to almost gloat to Kup.  Sadly, though, Megatron's nervous system has become bonded to Ratchet's at a molecular level.  One CANNOT live without the other.  Despite the obvious misgivings of his crew, Prime orders them to both be saved.  How could he do otherwise?  And thus ends another blockbuster issue.  It's very much a character study of Optimus and Grimlock.  The two very different Autobots nevertheless find themselves in parallel situations, reluctantly battling diseased and misshapen foes and choosing life over death.  (Also, neither of them has a proper mouth, forcing Wildman to use the eyes for all emoting.  He rises to the challenge.)  In many ways it's a small story, compared to what has come before and what will come later.  There will obviously be repercussions, many repercussions, but this issue revolves around saving just a handful of lives.  It's well placed, as it emotionally grounds the characters and makes what comes later all the more potent.

In addition to the Optimus / Ratchet characterization, Kup is really starting to come into his own.  He's a great foil to Optimus, practical where Optimus is idealistic.  Furman was a big fan of the movie, which is probably why a random Targetmaster is getting so much love. 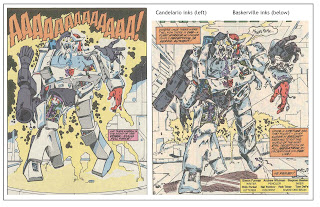 Earlier, I alluded to the first page picking up exactly where the last issue left off.  It allows for a curious juxtaposition; what is essentially the same Andy Wildman pencils, but done up by two different inkers. Look how much more appealing the illustration is this issue, compared to the last issue.  It's so much richer and more textured.  (Hans also pointed this out in the comments section of my review of #69.)  Baskerville  will stay on for the rest of the run, excepting issue #75.

And there you have it.  Another fantastic issue, bristling with raw energy.  The passion of the creative team is evident, and at this point over a year of set-up is starting to pay off in spades.  Next issue, "the issue you thought you'd never see (heck, we didn't think we'd see it either, and we produced it!): SURRENDER!"  Sounds amazing.  The Price of Life is available in IDW Publishing's  Classic Transformers, Vol. 5

, and comes highly recommended.  Pick up a copy at Amazon.com if you haven't already.
Posted by Jimtron at 11:23 AM

This was a great issue.

Thanks for putting the two images side by side! What a difference, huh? :) (and to think that inkers are only described as "tracers" in 'Chasing Amy'...)

I always got the Dutch translations of the Transformers comic, but after we moved closer to Amsterdam, I was able to get my hands on the US issues as well. This was my first US issue. The Dutch translations were behind by half a year or so, and the Dutch readers were still at the beginning of the Matrix Quest when I picked up this issue. I couldn't believe my eyes... begged my parents to buy it for me, and after this I made them go to Amsterdam every month so I could pick up the next issue. The effort was worth it every time :)

But this is probably the most special issue of the entire Marvel run for me. I just love every page of it :)