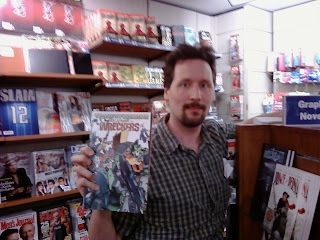 Wow, busy week for me last week.  A college buddy of mine is getting married this December, so this extended weekend I headed on down to New Orleans for the bachelor party.  I'll admit, I was skeptical that the added expense of an out-of-the-way trip would be worth it, but as it turns out The Big Easy is a great place to party with you testosterone-charged male pals.  (The gals there seemed to be having a good time too, so I suppose it cuts both ways.)  Drinking and debauchery in the French Quarters, and plenty of good food and history along the way.  Oh, and along the way, in a Hudson's News stand at the airport, I found a nice trade of The Last Stand of the Wreckers!  Let's get some more excellent Transformers fiction in front of the masses!  (Yeah, I know, I know, I'm exhausted in that picture.  Had I found it on the way TO New Orleans, I'd have been bright and chipper and perhaps even wearing a fez.) 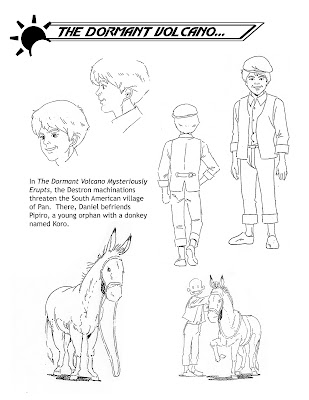 In any event, that's why there was no Transformers comic review last week.  Sadly, War of the Worlds is a bit on hold until my new DVDs arrive, as the latest episode is corrupted on YouTube.  At least I'm not skipping the main event, though, the weekly dose of new Transformersy model goodness that is The Ark Addendum!

This week's edition is brought to you thanks to Steve Mapes of Transformers At The Moon.  Yes, the very same fellow who (along with his bro) made it possible for me to put in an appearance at Auto Assembly 2010.  He recently acquired some Headmasters models, and while mostly they overlapped with my own material, he did have a few pages that were new to me.  And so, I bring you, The Dormant Volcano Mysteriously Erupts!  This is the first of two of the models, and showcases the main guest star of the episode, Pipiro!  Pipiro is an orphan from the South American village of Pan, and he's friends with a donkey named Koro.  I love the crude height-comparison sketch figure next to Koro on the right; it's just so goofy.
Posted by Jimtron at 11:11 AM

ooh been waiting to see how these came out. I actually picked up those sheets probably 3 or 4 years ago only I lost where I put them (they were in a plastic bag behind a cupboard) until I recently bought some more and started checking the ones I had.

Side note, sounds like your trip was a lot of fun.

I never saw this far into the Headmasters series, so I can't say for sure but... is it just me or does Pipiro look suspiciously like the Yellow Kid (specifically the last picture on the bottom-right)- perhaps an inside joke?