We Are Of Peace - the language of the Visitors 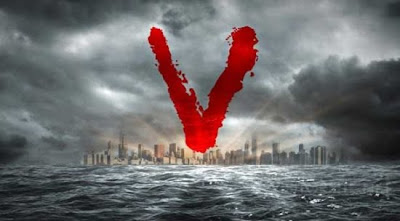 I was never a massive fan of the original V series. I enjoyed it well enough, when I caught it, but I never really delved into the whole mythology. When I learned that they were doing a reimagining, I figured I'd give it a shot. After all, I was skeptical about Battlestar Galactica (another show I only caught bits and pieces of over the years) and that turned out to be phenomenal.

This won't be a full-on review of the show. I'm still forming my opinion on it. They've done some things very right, like not dragging out mysteries we already know the answer of. However, there seems to be a bit too much coincidence going on. When Lost does it it's cute, since they've established that there is some paranormal force drawing them all together. When V does it it just seems like bad writing; mild twists for the sake of mild twists. 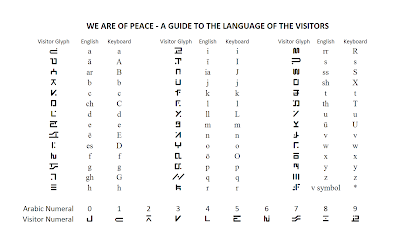 What did catch my eye was that the Visitors have a fully developed character set. I did some digging and it turns out that it's a very similar font to the symbols in the original V series. That one was coded by a friend of mine back when I was making new fonts all the time, Tommy of Escondido. However, in the classic series there were no numerals. This series added some, and a handy countdown in episode four (It's Only the Beginning) allowed my buddy Bill Forster and I to figure out what those were. We got to work and updated the font, with permission from Tommy of course. So, without further ado, the font of the visitors. I debated calling the font We Are Of Peace, but decided to go with the more simple Visitor 2009. I figured it'd be annoying if one had to remember the more fanciful name every time one went to go use it.

I can confirm that this font is in canonical order. That is, you can use it to read signs on the show. Many of them are translated to English anyway, but not always. The language of the visitors is written top to bottom, then left to right. While Tommy did much of the work originally, Bill and I sat down and re-cracked the language just to be sure. We used the message sent by Ryan Nichols, "John May Lives," as our first step. Once there, we were able to quickly ascertain the rest of the character set. As an exercise, here is an untranslated sign from the visitor embassy in New York.

Here's a last few notes for the font geeks out there. The V language consists of 41 characters, up from the 26 in English. The macrons and digraphs DO get used in the show, but typically not in signs. I suppose from a production standpoint it's a lot easier to write "checkpoint" and then convert to V than it is to replace the letters 'c' and 'h' with the 'ch' character. They do show up on computer screens though. Their numbering system seems to be straight base-ten, though I'll keep watching that to be sure.

V airs on ABC and is going to come back with new episodes in March. The font is a true-type font, free to download and distribute.
Posted by Jimtron at 9:50 AM

how come some of the letters when capitalized are normal font

Gee, I'm not sure. They really shouldn't be doing that.

its doing it on the f,h,k,m,n,p,q,v,w,and z when they capitalized

OK, I see what you're saying. Sorry, I misunderstood your question.

You can see how I mapped the font in the chart on this post. Does that make sense?

Great Job!! Best one I found!!

This alphabet is also based on the Language used by the Judeans, called Nibiruan and or, Hebrew.