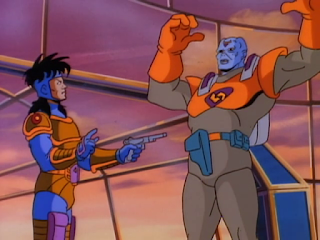 "No one makes you fire. It's a decision you make for yourself... and you have to live with it."

Venus Rising is the twenty-eighth episode of Exo-Squad, continuing The Liberation of Venus arc. The Neos are falling back all over Venus, with Draconis fighting a rear-guard action to enable as many of his troops to get into orbit as possible. When the resistance tracks him to Vesta, an open city, they attack anyway and get in over their heads. Able Squad comes to their rescue, but not before James Burns takes grievous injuries. Draconis recommissions Thrax and entrusts him with the destruction of Vesta, but Thrax disobeys orders and lets the city be, and is in turned allowed to leave when Takagi recognizes him. Draconis realizes he disobeyed, but is interrupted in his vengeance by the arrival of a very healthy looking Phaeton and an enormous warship.

What Works: Holy crud, this is a strong episode. A ton happens, both plot-wise and character-wise. Each member of Able Squad (except DeLeon) gets a nice moment or two. Takagi's confrontation with Thrax is great, but so is Nara's growing panic that her brother might be doing something stupid. I also love her facial expressions when she thinks Marsala is hanging James out to dry. Marsala gets to exhibit genuine concern for his partner's brother. 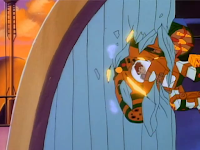 Bronsky's moment comes when he chooses to dog-fight Thrax, and gets handily outclassed. He also gets razzed by Takagi for firing on a friendly. Don't worry, he missed. It's nice to see the changing dynamic between these two. Before, Kaz looked up to Wolf. Now, Kaz has come to the realization that Bronsky is a bit of a goofball and not in the same league as himself as a pilot. Makes sense, it's been 2-2.5 years since the show started. Things change. 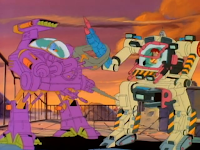 Weston gets to have a nice utility-frame to utility-frame battle. She also jokes with Torres about installing some new ammo in her frame, saying that it's guaranteed to blow SOMETHING up. 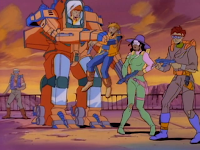 Torres, meanwhile, in addition to the ammo, gets to put resistance member Kroger in his place when he attempts to murder some surrendering Neo Sapiens. And J.T., who doesn't have a ton to do this episode, also gets to let some Neos go rather than gun them down. He's diligent about blowing up their materiel though. 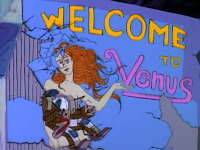 James has been obsessed about Draconis for some time, and he finally gets his confrontation. Unfortunately for him, it ends disastrously, with his troops outmatched and himself outclassed. It's a nice subversion of the revenge trope, coming close enough to taste his goal but then having it snatched away. Draconis seems barely aware of his presence. 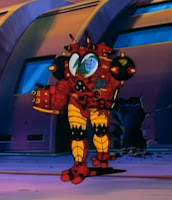 Oh, and let's not forget Draconis. He also does a perfunctory job rallying troops left behind in hopeless tactical positions as he does his best to salvage his command. Lots of great details, like his troops destroying computer files and codebooks. He knows he lost. He gets a shiny new e-frame this episode. It probably should have made it's debut last episode, but I won't complain. This one is based on a toy, and looks kind of awesome. The red and yellow color scheme, the spikes, everything about it just exudes menace. It's a much better fit for him than the bulky troop transport e-frame he'd previously been shown to pilot. 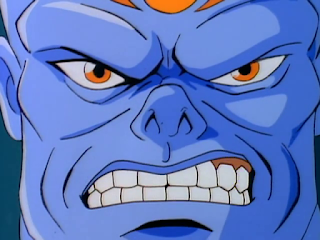 And, of course, Thrax. The guy who wouldn't shoot a downed pilot is trusted to blow up a city and, predictably, declines. It's a nice character beat, and sets Draconis up to be rightfully furious. Just look at that scowl when he realizes that Thrax has refused to blow up Vesta. (Draconis lied to him and told him that there was a timer on the hydrogen bombs, when in fact there was not.) 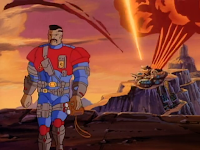 And, down to the minor stuff, I love that Winflield and the fleet are using their fleet to bombard the fixed Neo positions. Those forts look incredibly tough... but then when fire and death rain from the sky, they're a lot less impressive, aren't they. It's the nice kind of tactical detail that this show generally excels at.

What Doesn't: Not much. This episode is very well paced, but in the context of the show, perhaps The Liberation of Venus is accomplished a bit too quickly? Perhaps one more episode devoted to the war on the ground, before moving to space next go? 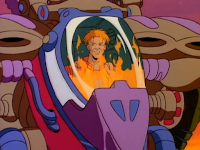 Watch For: Plenty to keep an eye open for. Kroger, who we've seen several times, really shines this episode, both visually and plot-wise. Keep an eye on him, he has a big role to play in the near future. 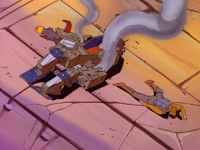 Speaking of, James crawls away from his smashed e-frame heavily favoring his left side. That'll pay off in spades in a few episodes. It's a rather pathetic visual, him crawling away from the wreckage. One really feels for Nara as she rushes to his side and begs for him to be ok. 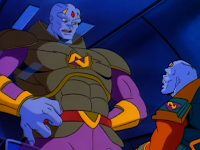 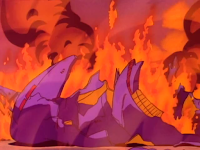 Draconis' shuttle, which has been prominent since Dragon's Rock, gets blown up by the resistance. It's a satisfying moment, though of course it all goes horribly wrong a few minutes later. Still, it was a fun prop, and it's nice to see it get a proper exit. Much more satisfying than having Draconis ride it to safety in orbit.

Finally, though this is obvious, the giant ship introduced at the end of the episode's coda is going to provide the big threat for the next episode, the space opera portion of the liberation of Venus. I love the directing, giving a real sense of scale. This thing dwarfs the normal Neo Sapien ships by several orders of magnitude. The change in focus technique (also used in the Thrax/Takagi redux confrontation) is especially effective. 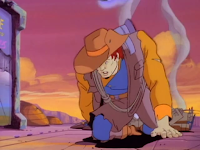 Overall: Great episode. Character bits, action, heroes and villains on both sides of the conflict, generally reasonable tactics. That the victory comes at a price gives it so much more resonance than if the heroes had just breezed to a win. The Liberation of Venus is shaping up to be one of the more satisfying and emotional story beats the show has delivered yet, and that's saying something.
Posted by Jimtron at 8:09 PM