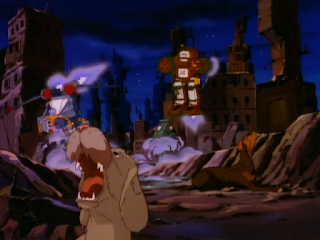 The Dogs of War is the twenty-third episode of Exo-Squad. Torres is sent to work with Earth Resistance to capture a Neo Mega. The presence of Megas on Earth does not sit well with General Shiva, and he resists following the advice of his aide Lucullus. Despite a trap laid by the Megas and tension between Chicago Resistance Commander Eve Hanley and Rita Torres, the mission succeeds. As punishment, Shiva is removed from command of Earth and Livia put in his place.

What Works: Everything about this episode works. The writing is clever, the directing is excellent, it advances the plot, and it puts the spotlight on two lesser heroes. Examples of the writing--Torres: "I don't question orders, I just follow them." Cut to Lucullus, admonishing Shiva: "Surely you're not questioning Phaeton's orders." 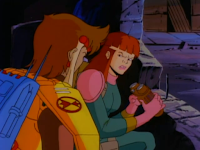 The Eve/Torres tension strikes the right balance. Torres is abrasive, but she's used to being in charge. Here, she's more of an adviser and she settles into the role badly. It's not overdone, it strikes exactly the right note. 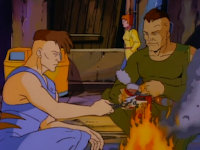 I like the dog imagery that frequently recurs. Dogs howl when they can hear the Neo Megas secret communication. Phaeton compares the loyalty of his troops unfavorably to dogs. And, here's a subtle one... homeless humans eating dogfood from a can. Didn't pick up on that one the first time you watched the episode, did you?

The resistance drop site feels pretty real to me. Throw out some trash, pick up some trash. Very cold war. 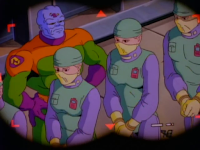 The human slaves look like skilled technical workers. Given that they're off to engage in some kind of top-secret biological project, that makes sense. (Though, come the reveal of that project, there are no humans anywhere to be seen.) I like the imagery of folks in chains, though at least one of them has enough freedom to engage in a Resistance intelligence drop. 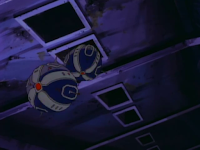 The fight at the end is a good one. The Resistance has mined the tunnels, but it barely slows down the Neos. (We also get our first glimpse of the Neo's techhead J.J. in action.) In the end, it's Napier showing up at the Neo's rear which allows them to escape. He also remains the resident bad-ass of the show, going hand-to-hand with a light Neo e-frame and coming out ahead. Did I mention he wasn't in a frame at the time? Yeah, he's that hard. 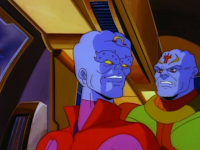 The Neo Sapiens, too, get a good chance to shine this episode. The Neo Megas are front and center. Lucullus is amazing. The actor nails it, this guy is every smarmy little kid who's much smarter than you and knows it that you ever went to school with. His arrogance puts Algernon's to shame. His every suggestion is a good one, and Sulla only gets captured because Shiva ignores his quite sensible advice to wait for the leader of the Resistance. 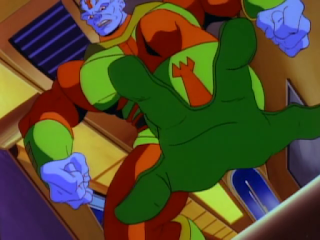 Shiva gets to shine too. He feels his authority slipping away and resists, even to his own detriment. I love the shot of him stomping his four-toed feet. "I'll squash them like the insects they are." Great directing here. He slinks away after getting relived of command, but you just know his story isn't finished yet. 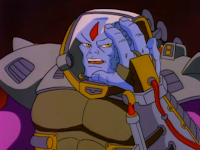 Phaeton has moved his flag to Earth for reasons unknown. He's obviously deteriorating physically. We get the first signs that he's deteriorating mentally as well. He definitely seems off his game here, trusting the Neo Megas, putting seemingly unearned faith in Livia. 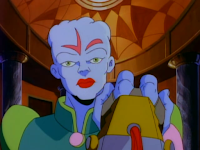 Livia begins her rise to prominence. Though we haven't seen her (outside of what was probably an animation error) since early season one, here she is promoted to commanding General of all Earth Forces. She seems to enjoy taunting Shiva. It's difficult to tell if she's genuinely concerned for Phaeton, or if she's merely trying to secure her own position.

Praetorius also shows up, and this time gets enough screen time to establish both his bonafides and personality. He created the Neo Megas, now he has a new project.

What Doesn't: Ummm... I'd have liked an explanation for why Phaeton's on Earth now. He was on Mars for all of season 1 and at least through episode 5 of this season. And Livia does seem to come out of nowhere. Still, minor complaints, all told. 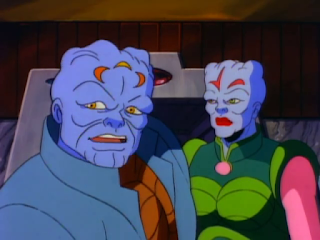 Watch For: Lots of hints in this episode. Praetorius, concerned about Phaeton, asks, "how long has he been like this? Is it Auto Muta--" only to be accused of treason by Livia. He's been sent to set up a lab in Antarctica. (The Resistance is keen to disrupt the supply movements going to his lab, but doesn't because Torres insists the Neo Mega mission has priority.) And, of course, the idea that Lucullus and Gracchus might be plotting against Phaeton will be explored.

Overall: Terrific episode. This is everything the show strives to be. It's especially welcome after the disappointment that was Inner Dark. And the next one, which takes place concurrently, is equally strong.