"Humanity's treatment of my kind has been... inhumane. But Phaeton's way is worse; it is genocide." Defying Olympus is the thirteenth and final episode of Exo-Squad, season 1. Don't worry, there is a much larger second season yet to come. Picking up where we left off, the gang fights their way outside of the complex with Phaeton as a hostage. He breaks free, only to get shot off the mountain by Nara. They break back in, find their e-frames, and use them to force a nuclear detonation under the lava that will destroy Olympus Mons and the brood center with it. Phaeton returns, furious, and has a tense one-on-one fight with Marsh. The team is trapped on an erupting volcano, only to be rescued by Takagi and Weston.

And thus ends season one, with Mars devastated by an enormous eruption, Phaeton and the Exo Fleet both crippled, and Marsh and Typhonus both sent on important missions. Great stuff. 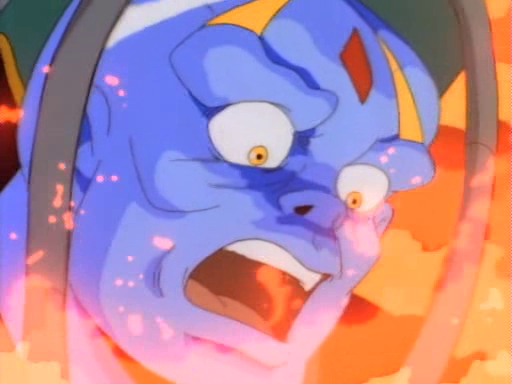 What Works: Unsurprisingly, the episode is a strong conclusion to a strong plotline. The e-frame fight between Phaeton and Marsh at the climax is exciting and satisfying, though there is by necessity a bit of wiggling to line up the leader of a political faction to face off against a Lieutenant fighter pilot. I can completely buy that Phaeton felt humiliated at his treatment as Marsh's prisoner and wanted to rectify things personally. Had he gloated less and fought more logically, he certainly could have prevailed. It was evident that his gear was technologically superior, and while he was doubtless less experienced with eframe operation than Marsh, his superior reflexes could have balanced that out. As it was, Marsh was only able to win with help. The fight is full of nice moments, like Marsh spinning around uncontrollably, and Phaeton dipping Marsh's wing into lava. Marsh using that flaming wing moments later to defeat Phaeton was a nice touch. I also like the little nod they give each other after Marsh has won and Phaeton has lost, warrior to warrior. 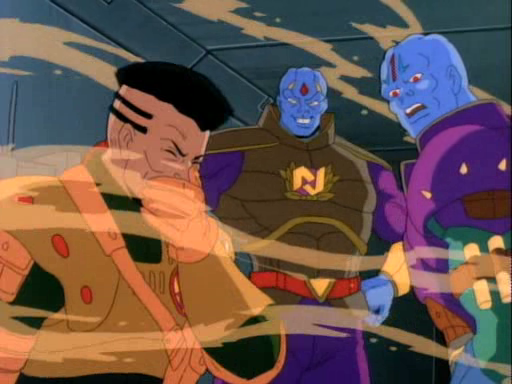 Likewise, the fight between Phaeton and Marsh OUT of their frames was nicely lopsided, with Phaeton easily trouncing Marsh. Nice to see that Marsh didn't even have a chance at that one.

I like that Typhonus went straight to poisonous gas once our heroes fled to the ventilation systems. Dark. Again, Phaeton seems unable to resist gloating, in this instance about "inferior terran lungs." Love that expression on Phaeton's face. 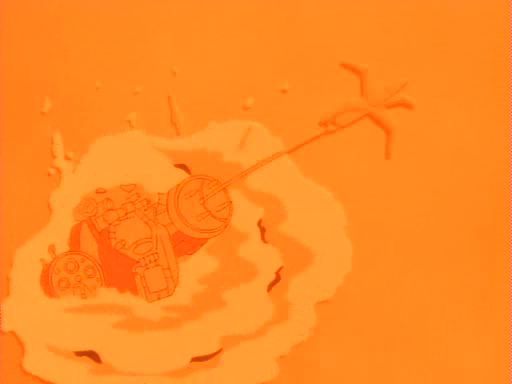 The aforementioned help Marsh received was Bronsky's frame, seemingly acting on telepathic/remote instructions from Bronsky. This was later touched upon when Marsh's frame bids him farewell, even after being disconnected. Marsh is nonplussed. It's an intriguing development, one foreshadowed by DeLeon's frame snarking at Bronsky earlier in the series. Oddly, this plot thread won't really be picked up on again in any serious way, but I won't count that as a negative here. In the context of S1, it's an interesting and logical development. "Farewell operator J.T. Marsh." 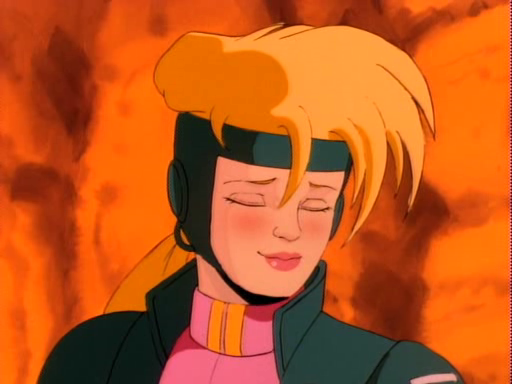 An interesting development that will get further exploration is the crush that Nara has on Marsala. After he saves her life during a difficult climb, she starts to move in for a kiss and then backs off with a blush. It's good character growth, but it's also excellent body language, a perennial strength of the series.

Watching the e-frames walk into the lava with their ordnance stuffed into their cockpits was a surprisingly emotional moment. 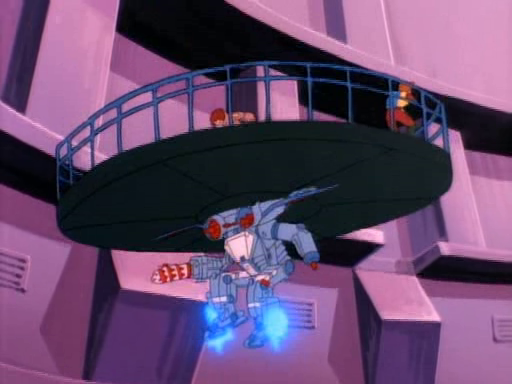 After trouncing Phaeton, leaving him to run (unsuccessfully) from the lava exploding around them, Marsh gets one last bit of juice from his frame to save his team on their plummeting lift. The superb directing managed to wring quite a bit of tension out of this, with J.T. and his frame both clearly struggling and the frame losing an engine at the last second. The jeopardy felt real. 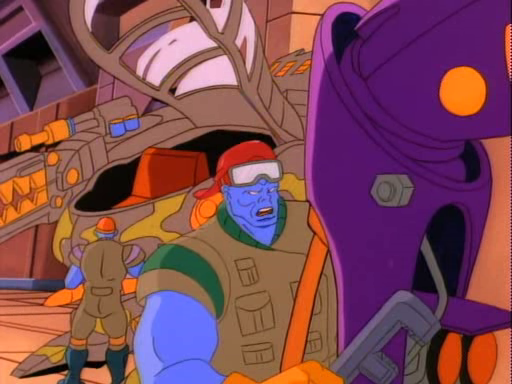 I really like the Neo mechanics the gang has a brief scuffle with. Just the design of them, they look very blue collar for Neo Sapierns.

The ending is fantastic. Winfield sending Marsh to negotiate with Pirates makes a ton of sense. In fact, the first time I was watching the show I was just starting to think to myself "hey, weren't there pirates in this show?" around episode 11 or 12. It's a great example of hanging a gun on the wall early and firing it late. The Exo-Fleet is smashed, and despite the Neo's setback on Mars the Neos are in ascendance. Winfield needs a fleet, and the pirates have one. 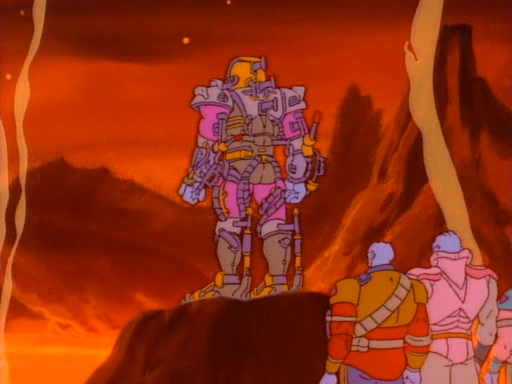 Likewise, the second ending, with Phaeton in a life support suit and Typhonus tasked with hunting down Marsh, Marsala, and Winfield has a wonderfully ominous quality to it. Phaeton has always been proud of his physical superiority, how will he react to being grievously injured? And what are the extent of those injuries? Serious enough for him to require assistance with both mobility and breathing, apparently. It's fun to see Typhonus get some comeuppance for his role in Phaeton's injuries, though really I'm not sure how Phaeton would have expected him to handle things differently.

What Doesn't: There's a repetitive moment where one of the mechanics goes over a ledge in an e-frame, echoing Phaeton's fate moments before. It's visually dull.

After defeating the mechanics, the gang conveniently finds all of their e-frames, brought into the complex for examination. It's a very cartoony moment, when it would have made more sense to just use commandeered Neo equipment. (Of course, you'd miss out on the AI stuff, but again, that doesn't really go anywhere anyway.) 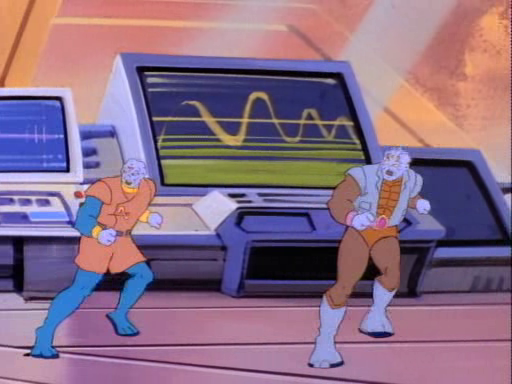 Watch for: Aside from the obvious hooks built in for season 2 (Marsh's mission, Typhonus' mission, Phaeton's injuries, Marsala's and Nara's relationship), one of the fleeing Neo Sapien scientists is Praetorius, an important character from season 2. As a geneticist, it makes sense that he'd be in the brood center.

Overall: Great stuff! I got to the end of S1 back in 1994 and was on the edge of my seat for months. One gets the sense that the Exo Fleet is battered, beaten, but not even close to ready to quit. The Neos may be stuck with homo sapiens for another year or two while a new brood center is created, but they've still got the upper hand in terms of ships and frames. It's gonna be an uphill fight.
Posted by Jimtron at 3:05 AM