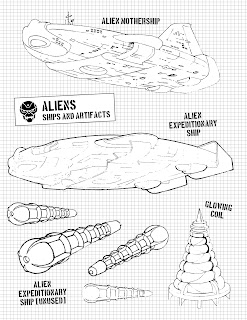 Listen up, true believers! I'm super-stoked to be heading down to San Diego in a couple of days for BotCon and the IDW VIP Tour. It promises to be a Transformers-full weekend for me. I hope I get the chance to meet and catch up with a bunch of you. Bring your Field Manuals, Arks, Almanacs and whatever else you'd like me to sign.

Meanwhile, I figured I'd finish off G.I. Joe and the Golden Fleece with the alien artifacts from the episode. One bit that is probably new to most of you is that the smaller alien ship, the expeditionary ship that drops the golden coil, underwent a complete redesign. The original concept looked more like a flying screw. The redesign looks a little more conventional and matches up stylistically with the large mothership seen at the end of the episode. 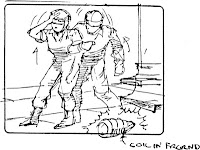 Hey, Joe-fans, what sort of extras would you like to see next? Any specific episode you'd like me to focus on? I don't have every episode, nor do I have every model from the episodes I do have, but I have a good amount. I'd love to hear from you to prioritize the Field Manual Addendums.
Posted by Jimtron at 7:22 PM

I can't speak for anyone else, but I'd really like to see Hector Ramirez's MS.

Jim, die you mark every alien thing in the Field Guide with a Quintesson symbol, or is there an implied retcon here?
--Derik

Hey, guys. Hector's model I used in an article for the G.I. Joe Collector's Club magazine.

No implied retcon here, I just needed a symbol.

Jim, in the episode "Lasers in the Night," there's a one-appearance character named Alice. She's a technician working on Lady Jaye's Skystriker. She's like a forgotten Joe. Any images of her?

I do have some other models from Lasers in the Night besides just Amber.