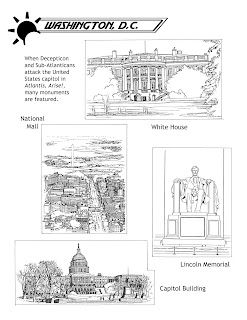 Funny story. Since I was starting with last week's entry as my starting point, I very nearly launched this page with Washington, D.C. next to a Decepticon symbol. (I'm sure my buddy Scott Rhymer would have appreciated that.) On my proofreading pass I realized my error and dropped in the Earth symbol.  More appropriate, but less funny.
Posted by Jimtron at 11:42 AM

Looking at these, something comes to mind. I seem to remember GIJOE ARAH had at least one episode in DC. I'm wondering if these might have been shared.

Doubtful but not impossible. They just weren't that organized.