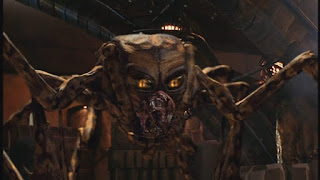 Farscape marches on!  The return to Earth has given the show a new purpose that had seemed sorely lacking ever since the gang blew up Scorpius' command carrier.  We start off with what is the last stand-alone episode along the mode of season one: S04E14: Twice Shy.  Chiana frees a pretty slave from some rough traders, but she turns out to be an emotional vampire spider creature! It's not spectacular,  but it's fun.  Some fun pop culture and geeky references in here.  John tells pilot that he's "smart enough, good enough, and doggonit, people like you," slightly paraphrasing the SNL character Stuart Smalley.  He also calls Aeryn "my Achilleus," for the greek myth.  He also riffed on the nursery rhyme when he quips to the monster, "along came a spider, exploded beside her."  We also get some nice continuity lampshading when John describes the spider creature's actions as "doing a T'raltixx."  Cute.

S04E15: Mental As Anything splits up the gang.  The men go off to get anti-Skarran mind probe training, while the women go off to the next episode.   We get some unexpected resolution to the D'Argo / Macton storyline, as he's also here doing training.  In retrospect, it feels like the writers are putting their ducks in a row for the endgame, and that's not a bad thing.  John's references include:
* his frequent "riddle me this"
* the whistling of the Colonel Bogey March
*a nice Simpson's reference when he calls their instructor Mrs. Krabapple
* Doctor Seuss, as he lists off reasons as "Little Cat A," "Little Cat B," and "Little Cat C."
Scorpius also picks up the nickname Scorpy-Sue. 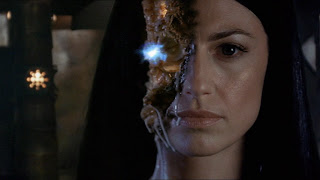 S04E16: Bringing Home the Beacon is a horrible pun that isn't apparent until the last minute or so of the episode.  Aeryn and the gals stumble onto a Peacekeeper / Scarran meeting and witness the Scarrans double-cross Grayza and Braca.  They disrupt the Scarran plans, but Aeryn gets replaced with a replicant with a built-in beacon.  Due to the almost complete lack of John in the episode, no geek references here.

S04E17: A Constellation of Doubt seems to take a detour, as a distraught John watches and rewatches an intercepted broadcast from Earth about their visit.  It was well set up back in Terra Firma, with his nephew Bobby walking around with a video camera.  It turns out, his subconscious was trying to give him some critical information about where he'd heard the word "Katratzi" before.  When Sikozu momentarily covers her face with a plate, he flashes back to the Stark/Sikozu hybrid, a fantastic moment.  The only real geek reference was bobby calling Crichton the "first and only human to boldly go where no man has gone before," another Trek reference. 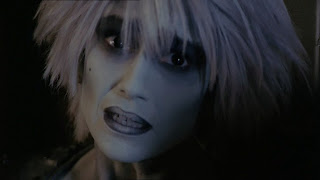 S04E18: Prayer is an uncomfortable episode.  John and Scorpius finally come to an understanding; John gives Scorpy wormhole tech if Scorpius helps him rescue Aeryn.   In the process, they wind up taking a wormhole to "Bizarro Moya" (ultimately a reference to Superman, of course, though Bizarro has entered the lexicon.)  Things get downright nasty when Scorpius determines that Sikozu/Stark can only access the Katratzi information when crossing over a soul.  He proceeds to slaughter many of the denizens of this strange Moya, including an Aeryn/Chiana hybrid.  (Claudia Black plays an EXCELLENT Chiana, getting the mannerisms perfect.)  It's also kind of cool to know why Scorpius was torturing Stark back in season one.  Stark had said it was a place... now we know, or suspect, that place was Katratzi.

There's a bit more geek besides Bizarro.  As John explains the concept of alternate realities to Scorpy, he illustrates it by saying that "somewhere the Cubs are winning the world series," a reference to the perennial losing baseball team.  We also revisit one of Scorpius' nickname when Scorpius insists on sealing their deal with blood.  "Nosferatu... my first instinct is always right."

And thus is the three part near-season finale set up. John has embraced life aboard Moya with Aeryn as his new reality, but to defend that reality he's forced to make a deal with the devil.  We'll see how things play out in the next, and last, four episodes of Farscape.
Posted by Jimtron at 11:34 AM