Let's finish off season two of  Farscape Geekwatch!  S02E19-21, Liars, Guns and Money (a nod to the Warren Zevon song, Lawyers, Guns and Money) is great episode and a continuity freak's delight.  Stark returns from dispersal (that didn't take long) with a plan to rescue D'Argo's son, who is to be auctioned off in a lot of 10,000 slaves.  His idea is simple... rob a bank!  Not just any bank, a Shadow Depository, where knaves and rogues store their ill-gotten wealth.  Stark's more devious than previously shown.  We find that many of the slaves are his fellow Banicks, and that the guy they are robbing is Scorpius, who of course tortured Stark for months. 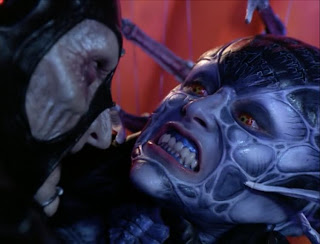 What's especially fun is that, when things go south, the gang comes up with a Plan B that involves gathering up villains from previous episodes to help rob the bank.  They gather up the Vorcarion blood trackers from 'Till the Blood Runs Clear, the Sheyang fish men to burn through the walls with their firebreath from PK Tech Girl, gauntlet wielding TavloidsTavleks from Throne for a Loss, and the Zenetian Pirates so they can deploy the Flax to stop any pursuit, from The Flax. Those latter have fallen in with Durka, from PK Tech Girl and Durka Returns, though Rygel dispatches him very casually.  Besides continuity porn, we get to see Scorpius engage in what can only be described as vigerous sex with the bank's proprietor, Natira, complete with his cooling rod popping out at climax.  Oh, my!

But that's not the point of this blog, really.  Let's look at genre references!  Crichton calls Scorpius 'Leatherface' and then even points out where it's from: Texas Chainsaw Massacre.  There are also a couple of Young Frankenstein references thrown in, with Crichton calling Natira 'Frau Blücher' and Scorpius 'Fronkensteen.'  There's also a 2001: A Space Odyssey nod, when John sings Daisy while slowly going out of his mind right at the end.  Non-genre references include John bluffing his way into the Shadow Depository by claiming that KFC is, "to my knowledge, unique in the universe, and unique is always valuable. Now, we have managed to procure all eleven secret ingredients."  (Note how he echoes Scorpius here.)  John also name drops Baywatch, and quotes the National Enquirer's tagline 'enquiring minds want to know.'

S02E22, Die Me Dichotomy, finishes off the season.  The Neuro-chip takes over completely, leading to tragic consequences.  The episode ends, in true Farscape fashion, with Aeryn dead and John lying helpless on the operating table, the speech center of his brain destroyed, his surgeon seemingly dead, and Scorpius in possession of the chip.  Minimal references, though.  All I can find is the clone exclaiming "ooo, fireworks!" in a Robin Williams Mork from Orc voice.  (Mork & Mindy, naturally.) 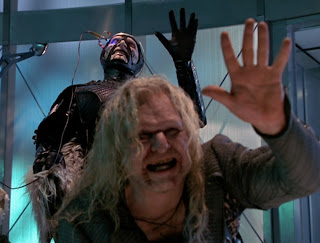 And, hey, since I'm in the mood, S03E01, Season of Death starts things off.  Despite the ominous title, we get the rebirth of Aeryn and the restoration of John, though Scorpius does get away with the chip.  My favorite bit from the episode was Scorpius' torturing of Grunchlk, who was pretty smarmy last episode.  Aeryn's resurrection seems a bit cheap, though drains Zhaan to the point that she will most likely die.

No genre references to speak of, though Harvy (now just a shadow of his former self with no chip to rely on) quotes the bible and John counters with Shakespeare.
Harvey: "Death is the only sensible course, John. For everything there is a season, a time to be born, and..."
John: "A time to die, yes, yes, yes. The Devil quotes scripture."

is available for purchase on Amazon, so what are you waiting for?
Posted by Jimtron at 9:48 AM