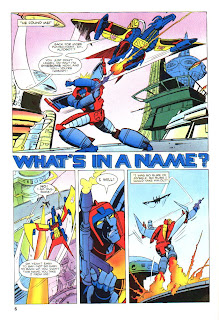 Time today for another story from the 1988 Annual - published in August 1987. Only a little one for today but the third and last story from this book Ark Duty will also be reviewed in the next few days.

What's In A Name?, written by Simon Furman, is a prequel story set while the Transformers were still all on Cybertron and Optimus Prime was not even the leader of the Autobots, merely a field commander. It is told in flashback by Swoop:

Swoop explains the situation - how he used to be known as Divebomb before an unknown Decepticon came out of nowhere, defeated him in battle and rubbed his nose in it by taking that name. Unable to take the insult Swoop tracked the Decepticon down, against orders, and engaged him once again.

Divebomb surprises Swoop - I am a big fan of his dragonlike Cybertronian alternate mode here - and the pair battle while trading insults. As Swoop takes to the air Divebomb hits him with a fragment rocket and forces him to crash. Swoop is able to surprise the grandstanding Predacon with a quick blast from his afterburners but is soon down again thanks to Divebomb's energo-sword. 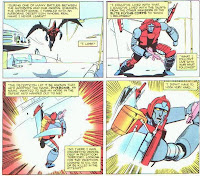 Swoop says that he could have lived with this defeat but for the fact that he is suddenly saved by his least-favourite commander - Optimus Prime - whose orders he disobeyed to find Divebomb.

The story cuts back to the present where we are treated to the reason behind this reminiscence - Sludge has shown Swoop a news story about the Predacons recent deprivations on Earth. Swoop recognises Divebomb and begins to plan his revenge.

Even given it's scant pagecount - only five - I really like this little story. It stands in good contrast to the modern trend of "decompressed storytelling" that you get a good slice of what makes Swoop tick as well as a few pages of decent action. Furman is obviously fond of the Dinobots because there was no real need to revisit the theme of Swoop's rivalry with Optimus Prime but it add 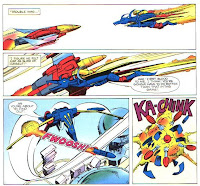 s good context to the longer and more epic stories as well as threatening to pay off in the present. Furman could have done this story either way, of course, but it is highly unlikely that he would have had the idea if "Divebomb" hadn't been a Bob Budiansky suggestion for Swoop's name which Hasbro ultimately rejected before repurposing it for the Predacon flyer. Dinobots vs Predacons certainly makes a good deal of thematic sense and having a personal grudge like this raises the stakes in exciting ways. I cannot wait to cover Grudge Match.

The art, by Will Simpson certainly tells the story in an effective way. This is particularly important because with such a small amount of pages to work with the action needs to be clear and easy to follow or a reader will skip over the pictures and miss half the point. It is always good to see Cybertron again and as mentioned above, I love Divebomb's alien-looking bird mode as well as Swoop's Cybertronian plane mode. This is very effective in the way that this is clearly Swoop but still very different from the prehistoric Pteranodon we're used to, even to the point of him folding his wings slightly differently in robot mode and gaining thrusters in his feet. As it is, Will Simpson, whose art I have had a lot of issues with in previous stories, really turns in a strong piece of work this time.
Posted by Bishbot at 11:29 AM

This annual is what got me back into transformers after a long break of not collecting any fiction at all. The art was universally impressive, and the fact it lead into the current story lines in the regular UK comic had me hunting down issues the next day.

I understand some people's issues with simpson's art, he can be a little stylised compared to other UK TF artists. This story however proved without a shadow of a doubt, why he's on this book in the first place. Clean, dynamic, action. No fussiness, no ambiguity.

This is a rare case of a TF story originating to explain a single throwaway line that was contradicted by subsequent events. In The Icarus Theory (#46) Simon Furman had established that on Cybertron Swoop had had the name "Divebomb". Presumably he had seen the early guide and liked the name as a piece of character background, little realising that the name would eventually be used. Whether he remembered that line or some eagle eyed reader wrote in asking about it is unknown.

(Such stories pop up elsewhere - there's a Doctor Who novel whose entire raison d'etre is to explain why a story made in 1974 but set in the future said Jupiter had only 12 moons - the number known about in 1974!)

What always amazes me is how much freedom Furman had from interference by Hasbro compared to Budiansky in the US comic. I mean, neither Swoop nor Divebomb were ever sold in the UK, but they were the right characters for the stories Simon wanted to write, so he wrote about them rather than about toys that were on sale. Other toys that were never sold in the UK, such as Roadbuster, Whirl and the Deluxe Insecticons, had their only appearances in the UK comics!

My favourite was when Hasbro clearly did tell Simon to do a story featuring the new toy ranges (Seacons, Sparkabots and Firecons), so he did a story ('Enemy Action') about them all being beaten up by a toy no longer available (Galvatron). Bob B must have been green with envy.

I think Galvatron was still on sale in the UK in 1988 as I have a memory of him appearing in at least one of that year's Argos catalogues alongside Powermaster Optimus Prime. However tracking down old Argos catalogues * is tricky. The TF catalogue/poster that came with the boxed toys had by this time limited itself to the new toys on sale so doesn't tell us anything either way.

(* For those not familiar with Argos, it's one of the only catalogue store chains in the UK. You select the goods from a catalogue printed twice a year and fill in a form & pay at a check-out, then wait for the goods to be retrieved from the stockroom.)

Regarding the general use of the toys, Furman has said in interviews that he can't recall being shown a schedule of what was being released or even being too consciously aware that particular characters he was using were not available on the local toyshelves (although isn't it a coincidence that one of his earliest stories removed Swoop from the picture in time for him to not be desired for that year's Christmas?). There were a few times when Hasbro UK did clearly mandate the use of particular new toys and the results are often a continuity mess. There's a prominent example in this very annual which had a three part text story featuring the origin of the Headmasters & Targetmasters - the first two parts closely match the first two issues of the limited series but the third part has a very different showdown and the whole thing is plagued by alternate names like "Kord" for Galen and "Grot" for Gort. In general it seems Furman was actually weaker at introducing loads of new toys en bloc and probably would have strained under the kind of mandate Budiansky had.