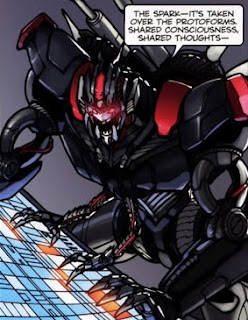 Hasbro's been making Transformers for over 25 years now, so there are a ton of names.  Naturally, many of them get recycled.  But we still get the occasional new gem, like Chris Mowry's Flatline over in Tales of the Fallen.

So, for no good reason at all, some possible Transformers names:

Magnum Opus:  Perhaps a bit too silly to have a name like Magnum, with all the associated connotations.  Seems Autoboty.

Brouhaha: Could be either an Autobot or a Decepticon.  Again, not terribly serious, seems like a bouncer or a low-level punk.

Gatecrasher: Again, could go either way as far as factions go.  Seems like a car with a reinforced front to me.

Schadenfreude: This one I like.  A cruel Decepticon name.

Deadbeat: Another Decepticon, though kind of a loser. Or, alternatively, an undead Nightbeat.


What about you, gentle readers? Any cool names? I'll highlight them up here if you've got some.
Posted by Jimtron at 2:45 PM

Here's a name generator I whipped up a long time ago: http://www.saltmanz.com/tf/tfnames.html

I've written a good portion of a TF-inspired roleplaying game called gearchange which includes different settings and game mechanics for the destruction of the movies, the characterisation and development of Animated, or the goofiness of Armada.

So we've got a journalist called Dead Air (tv van with a dish on top), a laptop called Runtime, a VW van pacifist called Dropout, a bunch of junkyard animals include a feline Spite and centipede Skitter.

The stuff just writes itself. =)

Those are some good ones!

I'm in the process of writing a TF comic with my own faction called the Prototytans. Each of the members has an original name, like Dropline and Deadfall. It surprises me how many cool names weren't taken at all, even with characters that didn't have toys, like the Minicons from the Armada PS2 game.

I've written up my own fanfic from about 10 years ago. Came up with some awesome names... some I found out later were already used.

I drew up a each character in MS Paint and posted it on deviant art http://quarnz.deviantart.com/art/Transformers-Fanfic-Characters-58297847?q=boost%3Apopular+Quarnz&qo=2 .. Their names are all listed bellow the pic.. 34 all up.. :)

Some good ones there too, anonymous. I especially like Mindscape.

What about an assistant for Flatline? Call him Asystole (the technical medical term for no electric activity in the heart).

I have a friend with OC's named Purgatory(male), Thunderbomb(female), Zone(male) and Asystole(male, mentioned above) and, much to my amusement, Flatline(male)! But Flatline is already used :)

Wow, I guess these are all femme names. Whoops, sorry guys :/