I've finally gotten a chance to watch episodes of the original Transformers cartoon that I haven't seen in over 20 years. You can't find 'em on YouTube. You can't get 'em on eBay. Now, however, they are finally mine. 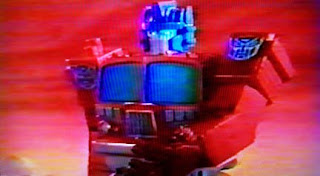 For those of you who don't know, while it's true that there were only 98 original episodes of The Transformers in America, the animated series whose story concluded with "The Rebirth," there were in fact 128 episodes aired in total. These last 20 episodes were produced for the 1987-88 television season, the true final season of the series--one which has never been made available on home video or DVD release. The episodes themselves were not new, but were presented in a new format consisting of a gigantic Powermaster Optimus Prime serving as narrator of these tales, relating his adventures to a young human boy named Tommy.

On the surface, it sounds ridiculous. It's essentially an entire season's worth of repackaged material, and the combination of stop-motion animation and puppetry used for Optimus Prime is admittedly unconvincing and terribly dated compared to today's technology. (Peter Cullen reprised his role as Optimus Prime, but the voice actor has since disavowed any recollection of participating in this project; one wonders whether he simply repressed the memory of the experience.) The quality of Jason Jansen's performance as Tommy Kennedy is about what you'd expect from a child actor (and the fact that he had no further acting roles according to the Internet Movie Database speaks volumes in and of itself). The fifth season of Transformers remains a subject for mockery within the fandom, readily cited as just another of the many examples why G1 was silly and ridiculous and is not to be taken seriously under any circumstances. 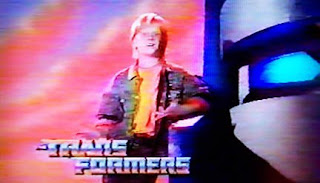 On the other hand, it was also the final, last-ditch effort of the producers to inject new life into the series. I recognize the attempt to appeal to their target audience by introducing Tommy, an all-American boy approximately the same age as the show's target audience. Optimus Prime didn't merely interact with Tommy; he acted like they were best friends! Me, I was in sixth grade when this season aired, but despite being in my preteen years I was still the biggest Transformers fan I knew; when most of my other friends had outgrown the show (and were giving me the toys they suddenly felt too old for), I remained a steadfast fan and was delighted that the cartoon was still on the air, in whatever format.

Powermaster Optimus Prime's narratives of each episode were nothing short of compelling. His voiceovers replaced the original narration of Victor Caroli, and Optimus placed himself squarely in the middle of the action with lines like, "Thanks to Megatron's treachery, I was deactivated! But before my diodes burned out, I passed the Matrix of Leadership to Ultra Magnus for safe keeping!" It truly transformed the episodes into a first-hand account of Transformers history. The cliffhanger endings to the multiple-part installments made me eager to catch the next episode, even if I already knew the story backwards and forwards. (This, in and of itself, was not an easy task. For me, the show ran at 6:30 on Saturday mornings, so not only did I have to get up much earlier than I was accustomed to, but I had to constantly fidget with the rabbit ears to get the local TV station to come in clearly enough.)

The new footage from each episode was also set in a contemporary era, and Optimus would regularly name-drop some of the then-current 1988 toys like Joyride, Sky High, and Landmine. We never saw any of these Powermasters or Pretenders in action, but Prime's casual references to these names hinted at a continued existence for these characters that extended past "The Rebirth," and sparked the imagination for possible new adventures. When Prime explained apologetically that Darkwing and Dreadwind had slowed him down on the way to see Tommy but that he had "demolished 'em," it wasn't too hard to visualize the climactic struggle of that encounter. (Interestingly, if we assume that each new TV season marks the passage of one year's time, and that the setting of the cartoon was a couple of decades ahead, then these adventures to which Optimus alludes actually take place in the far-flung future date of 2008!) 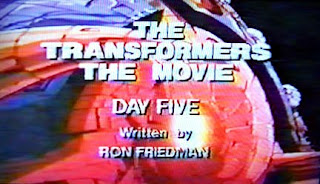 The fifth season was also the first time that The Transformers: the Movie was made part of the cartoon series proper, broken down into five television episodes that were heavily laden with previews for upcoming segments and recaps from previous installments. (The episode "The Transformers: the Movie" Day Five was only about ten minutes long, so it was buffered with a recap of the first four episodes that lasts another ten minutes, plus a music video for Stan Bush's "The Touch" wedged in at the end.) Still, for kids like myself who had yet to own a VHS copy of the movie, and for whom it had been a long two years since the movie was in theaters, the televised edition of The Transformers: the Movie was a most welcome addition to the show. (My first exposure to G.I. Joe: the Movie, another favorite of mine, was also through the televised version.)

The commercial breaks for The Transformers: the Movie were a most unwelcome interruption, but at least they were placed in logical spots. Some footage had to be There was also some effort made to tone down the content of the movie for a television audience (Spike doesn't curse, which was typical of most video releases at the time, but the comparatively mind swear word used by Ultra Magnus was also omitted for the TV version). It's interesting how Optimus Prime, as narrator of the movie, almost goes out of his way to assure Tommy (and the viewing audience) that his death in the movie is only temporary, and that he'll be reactivated again as a Powermaster in the due course of time.

Aside from the movie, other pivotal episodes like "More Than Meets the Eye" parts 1-3, "Five Faces of Darkness" parts 1-5, "The Return of Optimus Prime" parts 1 and 2 (which were conjoined with "Dark Awakening" to make an unofficial three-parter), and "The Rebirth" parts 1-3 were broadcast for this season, as well as "Surprise Party," which seemed to have been selected based solely on its kid appeal (Daniel Witwicky and Wheelie save the Universe). Some of the dialogue written for Optimus Prime and Tommy suggests that other episodes would have eventually been reformatted in a similar manner (at one point Tommy asks, "What's up with Grimlock? Did he fall on his head when he was a kid, or what?" but no Grimlock showcase episode was ever aired for this season to answer Tommy's questions). Unfortunately, however, this season would be the proverbial last hurrah for the cartoon, which would exist only in syndication on select television stations for a year or two afterwards. 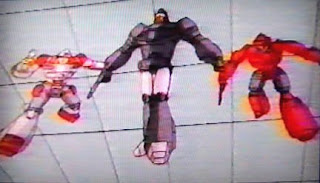 The theme song for the fifth season was pieced together using plenty of footage from the movie as well as the animation from numerous Hasbro toy commercials (which typically boasted a much higher level of quality than most of the TV episodes). This technique was also employed for "The Rebirth" during the fourth season, but since that season was only three episodes long, one of the Decepticon Duocons named Flywheels holds the distinction of being the first character to appear in the opening theme who does not make an appearance in any episode of the show. This holds true of the fifth season as well, as several characters became part of the G1 cartoon simply by merit of their toy commercials being selected as filler for the opening theme. The small Autobot Targetmasters (Landfill, Scoop, and Quickmix) show up during the opening titles for this season, as do the original three Autobot Pretenders (Landfill, Waverider, and Cloudburst, pictured).

I remain a fan of the fifth season for the same reason I enjoyed Transformers: Generation 2 (another series which has been decried by fans): it granted me access to the original Transformers stories I grew up with and fell in love with, during a time when Transformers was ostensibly dead or dying. While there's not much danger of that happening any time soon, it's easy to forget that there was a time before Transformers had established itself as a multi-generation 25-year franchise, when innovations like the Headmasters or Micromasters were necessary innovations to keep the toy line fresh and exciting. The fact that the original cartoon survived for five seasons before its ultimate cancellation was a testament to the longevity of the stories and characters, and helped contribute to the foundation on which Transfomers exists today.

Hmmmm. Pretty neat that the opening and closing narrations were able to sort of add the year five toys into the mix.

Does this mean that you might update your most excellent fifth season transcripts, Zobovor?

Unfortunately, large chunks of my web site are still offline--but yes, I definitely plan on completing the transcripts.

You should have seen Headmasters and Masterforce then, in order to see all those characters actually work and have a place in the story :P

"You should have seen Headmasters and Masterforce then, in order to see all those characters actually work and have a place in the story :P"

Except that Headmasters and Masterforce didn't include Sky High, Landfill, Scoop, Quickmix or Tommy Kennedy (and Powermaster Optimus Prime, Joyride, Landmine, Darkwing, Dreadwind, Waverider and Cloudburst are all completely different characters from their Japanese counterparts. And I suspect that for the average sixth grader, getting up at six in the morning to watch Season Five is easier than learning Japanese and divorcing your parents to move to another country.) Great article, Zob.

I enjoyed the article. Shame the S5 Prime/Tommy links are not commercially available.
-Ralph