Zob's Thoughts on Perceptor vs. Hardshell

I will never forget when I first stumbled across the description of this set in the Walmart inventory system. I had absolutely no idea who "PERCEPTOR VS HA" could have possibly been referring to, since there were no relevant Decepticons whose names started with those letters, and yet I knew they weren't going to introduce a brand-new character in a line that specifically pays tribute to characters from the past. For some reason, I allowed this mystery to plague me for many weeks until the answer was finally revealed: Bombshell had gotten a new moniker to elude trademark disputes. In retrospect, it makes perfect sense, and I could kick myself for not seeing then what right now seems quite obvious. 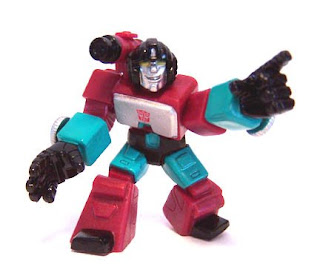 Perceptor's enjoyed some decent exposure over the years, due largely in part to his fortuitously landing a featured role in The Transformers: the Movie. Pretty much anybody who factored into the movie was automatically given an extra year's worth of shelf space in 1986, catapulting Perceptor to an important role during the third season (and probably leading to his appearance in Super God Masterforce, in which he and the supposedly-dead Wheeljack play a key role). He's already gotten both a Super Collection Figure and domestic Heroes of Cybertron release, and the Robot Heroes figure seems to be taking its cue from that sculpt, resulting in a very nice, simplified, boxy, cartoony incarnation. He's posed in such a manner that suggests he's really excited about some scientific discovery, with his index finger proudly outstretched and wearing an expression of happy astonishment. ("See? SEE?! I TOLD you there was Decepticon activity in this Oort cloud!") His shoulder cannon is actually on the wrong side to be cartoon-accurate (you can mount it either way on the Hasbro toy, but in the show he always wore it on his left shoulder), but this is a minor consideration.

The color scheme is much closer to the Hasbro toy than his animation model, with a dark cherry red and a greenish turquoise on the arms and legs, rather than the brighter red-and-blue scheme used on TV. (This helps to differentiate him a little from the earlier SCF/HoC versions.) Some paint details were omitted like the focus knob on the top of his shoulder cannon and the glass parts of his lenses. Oddly, Perceptor has extraneous paint applications he doesn't even need; he's got turquoise spots underneath his chest plate and on his pelvis, even though he only needs one of these (this is where the mirror would be located on the Hasbro toy, but the Robot Heroes version doesn't seem to have this component in evidence). He's also got yellow eyes instead of blue, but I'm okay with that. I'm just glad they didn't give him the face mask that the original transforming toy is wearing, because that's the biggest difference between the toy and the cartoon model. (It may not seem like much, but the mouth goes a long way towards making the figure look like Perceptor the alien robot from planet Cybertron, and not Perceptor the seven-inch plastic toy. Even the illustration on the box of the Takara reissue toy showed Perceptor with a mouth, because they knew that's how the character is supposed to look.)

Something I've noticed with the recent Robot Heroes is that a lot of them aren't carrying guns. If the characters weild unique signature weapons like shoulder- or arm-mounted weapons, or unique melee gear like swords, they always seem to be included. If they're supposed to be armed with handheld guns, though, they tend to get left out these days. I wonder why that is?) 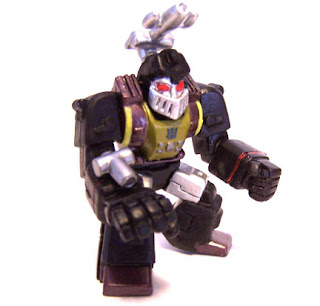 I suspect that good ol' Bombshell got a new name because calling him "Insecticon Bombshell" would have been too confusing, in light of the fact that Shrapnel was already assigned the name "Insecticon." The name doesn't bother me that much, since at least it's an attempt at a creative workaround instead of just trotting out one of the tired, old recycled trademarks like Scavenger or Smokescreen or something else completely inappropriate.

The sculpt is good and menacing looking, though he only has two points of articulation due to the way his head is partly recessed into his body. (Almost none of the early Robot Heroes toys had head articulation, but lately almost all of them do.) As with Shrapnel, the guns on his arms (which more or less functioned as legs in his beetle mode) were painted, calling attention to a design element that was never really played up before now. More than anything else, though, I love this little guy's expression. He's cocking one eyebrow in an expresion of something like evil mockery, and it really suits the character. ("Look, Megatron's in trouble. If I wasn't so hungry, I'd stop to help him out! Nyah hah!")

Something interesting about Bombshell's cartoon model is that even though he's black and purple in insect mode, he actually has a grey chest in robot mode (probably because somebody was working from an unfinished toy whose die-cast parts were unpainted). So, technically this figure is a little closer to the Hasbro toy than the cartoon model. They made his chest compartment gold, which I suppose approximates the color of the translucent yellow Diaclone canopy on the original toy. Also, I think somebody neglected to sculpt the little yellow shoulder connectors (which serve as eyes in beetle mode), but they painted little yellow stripes around the spot where they would have been. So, they get points for using paint applications to make up for a sculpting oversight. (Oddly, Bombshell didn't get bogged down in superfluous paint details designed to resemble the consumer-applied stickers, the way Kickback and Shrapnel did.) Overall, he's a great little figure. Bombshell has always been a favorite character of mine, so I'm pleased to see that his likeness was captured so well.

Now that they've gotten all three Insecticons out of the way (Kickback comes packaged with Ironhide), you know who I want to see as Robot Heroes? The Constructicons. All six of 'em. I don't even care if they get wacky trademark-evading names like Buckethead and Quickmix and Hightower, but I want to see cute, super-deformed green-and-purple Decepticons with gigantic heads and fists and feet. (This toy line could go on forever and I would happily buy up every single Robot Heroes toy produced. They're just that cool.)
Posted by Zobovor at 12:58 PM

Just wanted to point out that Perceptor and Wheeljack showed up in Victory, not Masterforce. They were joined by Minerva, who was from Masterforce. Otherwise, great reviews. Love the site!

lol, I was about to say exactly the same. It was the Victory series where Perceptor and Wheeljack (with Minerva from Masterforce) came back to try save God Ginrai ;)
What a great story could be told about those 3 scientifics together!

Hmm. I remembered seeing Perceptor and Wheeljack hanging out with Minerva, so maybe that's why I thought it was Masterforce. Thanks for the corrections!

I have to say, I agree with you about the Hardshell name. They could have done a LOT worse. Very nifty to have all three Insecticons out now.