Mini Autobots are back! The Legends Class has, of course, traditionally been reserved for miniaturized versions of larger toys, giving kids a chance to afford their favorite characters at a reasonable price point of right around five bucks a pop. Lately, though, some of the Legends toys have also paid tribute to popular G1 characters from the past, offering tiny little bite-sized versions of Transformers like Jazz and Hound and even G2 Megatron. This trend continues with the toys slated for 2009 release as part of the 25th anniversary. All three of the latest characters were previously part of the Mini Autobots assortment, making these updated versions eminently appropriate as Legends toys. They're shipping along with a tiny little Legends version of Animated Starscream, which I did not buy. 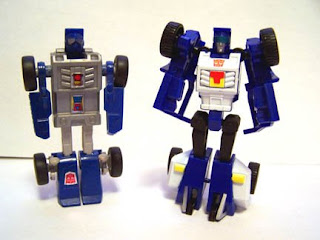 BEACHCOMBER
There are so many Transformers characters out there, even if you just limit yourself to the 1984-85 characters, so it's not really too surprising that there are still characters out there like Beachcomber who have never gotten new toys (the last time he was approached by Hasbro was the metallic green G2 edition back in 1993). The new Beachcomber is instantly recognizable as his G1 namesake, with an attractive dark blue color scheme with white highlights. (White and grey are colors that seem to get confused with each other regularly. I'm thinking mainly here of the SCF version of Starscream. It's not really the right scheme for Beachcomber, but it looks okay. Blue-and-white works for Mirage, anyway.)
He measures at about three inches tall in robot mode, just barely taller than the original Beachcomber toy, and he has most of the appropriate details in this form (the tilted exhaust pipe shaped design on his chest, the round thingies on his pelvis, and even the slanted I'm-so-sad-to-see-you visor). Some effort was made to turn this into a cartoon-like version of Beachcomber, with blue eyes and a silver-painted face that includes an actual mouth, rather than the strange multi-faceted duckbill on the older toy. (I would be remiss if I didn't point out that in the show, Beachcomber was one of the few Autobots who didn't actually have blue eyes. Still, they get points for trying.)
He's got some nice articulation, with working hips and knees and shoulders that move in two different directions, plus little feet that pivot a little because they form the flip-out seats in his vehicle mode.His transformation is pretty similar to the original version, with a handful of new tricks (his head is connected to his pelvis so that it disappears into his chest when you slide his torso up). He turns into a dune buggy that really doesn't look anything like his older vehicle form. It's like they took the same wheel base and tacked on a bunch of armor paneling. This is sort of like what would happen if Beachcomber and the Batmobile from Batman Begins had a kid. On the upshot, at least he doesn't have side fenders that are pretty obviously shaped like robot arms. He looks more like Triggercon Ruckus, actually, complete with a little machine gun mounted in the back. (The gun-and-spare-tire assembly pops off, but there's no way to arm him with it in robot mode. That would have made a nice little bonus feature.) All in all, this is a great update for the character. Now all I need is to go find a tiny little plastic bird so I can perch it on his shoulder.
Incidentally, Beachcomber rang up as "DO NOT SELL" at the cash register today. I know that a week or two ago, the entire Legends assortment was temporarily pulled from shelves for reasons I'm not entirely clear on. It's possible that Beachcomber's specific UPC wasn't cleared out of the block list in the computer system. (In my case, it wasn't a big deal, since the cashier just rang up Brawn twice for me. Still, don't be surprised if they don't let you get Beachcomber, because usually stuff rings up like this when it's on recall.) 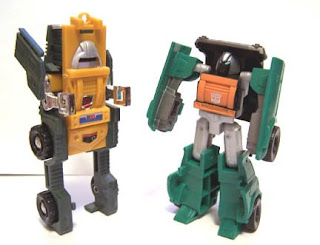 BRAWN
Brawn is a character who's basically needed an updated toy ever since 1984. It's not the toy's fault that Floro Dery took enormous liberties with the looks of the characters for animation, but the end result is that Brawn is the second-least humanoid looking Transformers toy, with his featureless mask, blank visor, skinny chicken legs, and giant squared-off robot claws. The Car Robots toy Wildride was named "X-Brawn" when the toy line and cartoon were ported to the U.S., but that's about as much of an homage as Brawn has ever really gotten (not including unofficial CybCon exclusives, of course). This toy was very clearly intended to represent the cartoon version of Brawn, and it's a very good-looking update.
The toy comes mistransformed in the package, with his shoulder detached and his arms pointing the wrong way 'round. (The toy fits just fine in the bubble and tray the correct way, which leads me to suspect it's just a packing error at the factory.) Brawn is actually cast in silver and black plastic, with liberal paint applications (silver on his helmet; lots of orange on his chest) to give him his signature color scheme. The only problem is that his face remains unpainted, so it's black with blue eyes. It's not a horrible look, but painting his entire head would have been better than just the helmet. He's got a head design that's true to the cartoon, actual fists, and some big, chunky legs instead of those embarassing stilts. He's got a silver Autobot badge on his chest, which seems a little strange since both Beachcomber and Bumblebee got red ones. He's articulated at the shoulders and hips (his knees move backwards for the transformation but not forwards; his waist also pivots back for the transformation but it's not very useful articulation). He's just under three inches tall, though his height is somewhat variable depending on how you pose him. (He's designed so that his feet will be flat on the ground if you pivot his legs slightly apart from each other.)
If you took a toy and gave it Nightbeat's arms and Skids' legs, you'd have an idea of his transformation process. The backs of his legs are clearly visible along the roof of the vehicle mode, and you can see his face peeking out from underneath the vehicle from the sides and front. His feet also protrude rather prominently from the bottom of the chassis, giving him less than a millimeter's worth of clearance, but aside from this it's a good update. (The packaging calls it an SUV mode; there's no way they could get away with using the Jeep trademark without permission.) In this form he's got five rolling wheels (his spare tire is mounted on a pin so it spins, too). He does suffer from one problem the original Brawn toy had--his rear windows are unpainted. Deliberate tribute, or paint application budget? You decide.) The shade of green is a little too rich for Brawn (he should be more of an army green), and the unpainted face bothers me, but aside from that, this is a mighty fine tribute to a mighty Autobot. 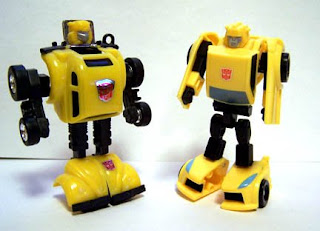 BUMBLEBEE
It's funny how there are two Legends Class toys called Bumblebee on the pegs at the same time (the G1 edition and the Animated version). There were a couple of parents in the store shopping when I was looking through the action figures aisle; one of them had a three-year-old boy, the other had a four-year-old, and both of them were looking for toys named Bumblebee. When I found mine, they each snapped one up as well. I heard one of them remark that half the toys on the pegs weren't even in the movie, which leads me to suspect they weren't shopping for Legends toys at all. Clearly, Hasbro is going for name recognition as much as anything else.
This is not the first version of Bumblebee that's designed to look like the character from the G1 cartoon. The Pretender was a good try, and definitely an improvement over the original, but for some inexplicable reason it was sculpted with Cliffjumper's face (This was considered a mistake back in 1989; you know, back before Hasbro thought that Bumblebee and Cliffjumper were the same toy in different colors). The Classics toy was also a good-looking toy, but it deviated a little too much from Bumblebee's original look, making it more of an update than an homage. Unfortunately, there's no way Hasbro can produce a Transformers toy that turns into a Volkswagen Beetle (unless they find a nice loophole to circumvent things and release it as a "Transformers brand" keychain instead of a toy), but given the constraints under which they're working, I find this to be a very nice attempt. (I'm sure we'll eventually see a red version of this toy named Cliffjumper. Sigh.)
Again, Bumblebee's a little less than three inches tall as a robot (making him shorter than the original G1 toy; despite the way he was portrayed in the fiction, Bumblebee's toy was actually one of the tallest Mini Autobots). His chest and feet are a little more square-shaped than I'd like, and his head sculpt seems to take its cue from that, as his helmet and face are very angular as well. He's colored appropriately and does resemble his animated self--he has black arms and fists with yellow forearms, and a silver face and mouth with blue eyes. He's even got a pelvis, this time, something the original toy lacked completely. He is poseable at the shoulders, hips, and ankles; his waist also pivots a little. His head looks like it should rotate, since it's a separate piece, but it doesn't.
Bumblebee's described as a "street racer" on the packaging, owing to the somewhat nondescript vehicle form he turns into. Interestingly, Bumblebee transforms almost exactly like the original Wheelie toy. Seriously. The only difference is that his head is mounted on the top of his chest instead of in the center of it, so his backpack covers it up when you flip it up and over. Despite the fact that he doesn't turn into a bug, he still looks like Bumblebee, all yellow with metallic silvery-blue painted windows and bright blue headlights. He's flat and lean, not nearly as cute as he used to be, and kind of reminds me of the Mini-Con named Oval (or maybe it's Backtrack; I can never tell those stupid little things apart). Still, if somebody said they were going to make a new Mini Autobots version of Bumblebee, this is exactly the way I'd want to see it done.
Zob
Posted by Zobovor at 4:14 PM

I actually really, really appreciate these toy reviews. I like the tone taken in them and the material covered. Unlike a l;ot of toy reviews time isnt wasted giving in-depth description on the transformation sequence and focuses more on details present on the toy, the visual appeal and the playability.

Awesometacular review! I love the Legends figures - they got me back into collecting Transformers. Keep up the good work!