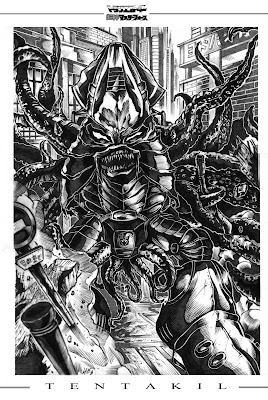 This week Iván brings us Tentakil. Here is what he has to say about it:

I have fond memories of this character.
I am a follower of the Kaiju [Japanese Monster Movie - Jim] genre films, like Godzilla and Negadon (I recommend this movie, it's visually terrific).
I think they are movies that, while poor on some level, are fun, with interesting work of the models and figurines.
Tentakil in this sense, appeared in the series along with the rest of Seacons as monsters of the genre, curiously in the series never came to transform into robots.. they were a kind of army, at that point, again it is a very Japanese notion.
For that reason I have put in the fund buildings with kanjis. Also try to Tentakil, fewer children, more serious .
But I must admit that ... these characters are better and more utilized in the series of comics for Marvel, but by the fact that their natural environment is water, its field of action is somewhat limited, a pity...

One of Iván's best pieces :)

Man - that version of Tentakil is just the business. He wants you dead, no two ways about it. Awesome (and terrifying) work Ivan.