It's been a while since I've even thought about Beast Machines, honestly. I continue to enjoy G1 throughout the years even though no more new toys or episodes are being made. With a lot of the other shows, though, I pretty much stop celebrating them after Hasbro moves on to the next new series. That said, I enjoyed the show as a continuation of Beast Wars, even though I disliked the direction in which they took a lot of the characters; I collected all the toys because I was still very much in Completist Mode, despite the rather repugnant designs of many of the Maximals (I like my robots to look like robots) and the utter pointlessness of a few of the toys (I'm thinking mainly here of the Deployers and Beast Riders). In my mind, Beast Machines was the worst Transformers show up to that point, at least until Armada came along and made it look like fine art.

In any event, I was surprised to hear that Hasbro even wanted to acknowledge the existence of Beast Machines, let alone pay tribute to it in the Robot Heroes series. It just seemed too soon, somehow. Nevertheless, Hasbro has stated that the 25th anniversary of Transformers will be a celebration of each of the different toy lines through the years, and to that end, this set commemorates the Beast Machines incarnations of Cheetor and Tankor. (It's worth mentioning that this was almost certainly intended as a 2009 product, since the 25th anniversary doesn't begin until next year, but this certainly wouldn't be the first time next year's product showed up in December.) 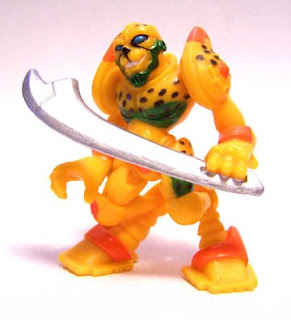 CHEETOR
There was a tremendous disparity between the CGI models for the Beast Machines characters as they appeared on TV and the Hasbro toys in their likeness, a juxtapisition particularly evident in the earliest toy releases. Story editor Bob Skir was known for willfully spreading misinformation about the show ("Rhinox is dead. deal with it!"), so I was never totally clear on whether the CGI models were still in early stages of development when Hasbro used them as reference for the toys, or whether the Mainframe artists were just granted tremendous creative liberties for the sake of aesthetics. (Skir's answer to this question would most likely have had something do with sock puppets.) Anyway, none of the Cheetor toys released for the Beast Machines line was completely faithful to his television persona (the Night Slash Cheetor toy probably came the closest, but ironically it was released in all-black deco that did not reflect his color scheme in animation). The Robot Heroes edition of Cheetor would have been the perfect opportunity to create a figure of Cheetor that was true to his computer-animated appearance, but instead it seems that somebody at Hasbro simply used the Supreme Cheetor toy for reference. Supreme Cheetor was the closest in appearances to the CGI model, though, so it was a good choice.
This is a fairly faithful miniaturization of that toy, right down to his single tail-sword (colored silver here) and his feet, which are shaped just like the rubber pads underneath the Supreme Cheetor toy that enabled the ungainly, horse-legged thing to stand up. Probably the best thing this figure has going for it is that, unlike the full-scale version, this one doesn't fall apart if you look at it funny. Cheetor has articulation at the head and shoulders, though the angle at which he's holding his sword does preclude the movement of his left arm somewhat. It's worth mentioning that Cheetor does not have a tampographed Maximal insignia anywhere on his body, which is odd since Hasbro has usually been really good about finding some place to put the faction symbols on these guys. 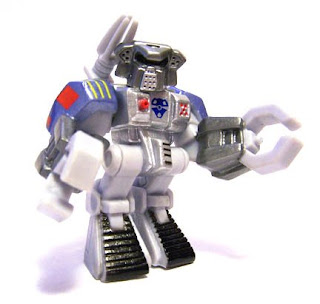 TANKOR
The original Tankor toy was one of the worst victims of the difference in the Hasbro/Mainframe design philosophy. (Hasbro was spelling it "Tankorr" for a while back during the Beast Machines original run, but evidently they're sticking with the single "r" spelling these days. There have been a handful of other toys with the name, like the Transformers Universe Micromasters train and the new version of Octane, but this is the first time in a while the name has been used for the original character.) They did eventually release a smaller Tank Drone toy late during the toy line that more closely reflected the CGI design, and while it still wasn't a perfect match, it was a much closer attempt to match the character from TV. The Tank Drone toy served as the inspiration for Robot Heroes Tankor, which is readily evident because of the shape of the shoulder armor and claws and head, all of which are a very close match to the Tank Drone toy. Tankor has a swiveling head and arms (they could have probably gotten away with giving him poseable legs, too, but I guess that would have put the toy over the alloted budget). Of course, Tankor actually towered over the Maximals in the television show, even the tall and gangly Cheetor, so these two figures are grossly out of scale with one another (though the actual Tank Drone toy might make a good stand-in).
Some robot designs lend themselves really well to the Robot Heroes chibification process, while others seem to suffer somewhat in the translation. Tankor is just super cute, with a gigantic head and claws that make him look like anything but a diabolical Vehicon death machine. I can only imagine how cuddly and adorable Robot Heroes versions of Jetstorm and Thrust would be! I like this figure a great deal, but I almost wish they'd released two more Beast Wars figures instead, since these two won't make any sense on my display shelf (which is filled with Star Wars Galactic Heroes on the top and Robot Heroes from G1 and Beast Wars on the bottom).
Frankly, I feel like this set is a tremendous waste of potential. Had I been placed in charge of putting together a commemorative Beast Machines set, the first character I'd make sure finally got a toy would have been the Diagnostic Drone, easily the most charismatic and likeable character in the show. The logical character to pair him with would have been Megatron--specifically, a Megatron with a helmet and harness that resembled his CGI model and wasn't tied down by the limitations of either having to transform, or being an oversimplified McDonald's Happy Meal toy, or both. (A good argument could be made for pairing him with Nightscream, too. You know, a super-tiny version to counter the existence of the gigantic version that was once sold in stores.) In any event, a Robot Heroes Diagnostic Drone would pretty much be the right scale to interact with the existing Beast Machines toys, too, and would have finally given physical form to one of my all-time favorite Transformers characters. (Clearly, Hasbro isn't planning on doing too many more Beast Machines sets, if any at all, given that they didn't even bother to modify the mold for the bubble on the front of the card. It still sports the original Maximal and Predacon insignias from Beast Wars; there wouldn't have been much point in creating a bubble with Maximal and Vehicon symbols for a single toy release).
Probably the coolest thing about this set is that they finally came out with a Beast Machines Cheetor toy that's to scale with the G1 toys. Robot Heroes Tankor, meanwhile, could serve as a Tank Drone to the transformable Tank Drone. (I'm envisioning a scenario in which each size of Tank Drone has an even smaller drone at his command, sort of like the way the Cat in the Hat had a smaller Cat "A" hidden under his hat, who in turn had an even smaller Cat "B" hidden, and so on for each letter of the alphabet. Tank Drone Z, besides sounding like a Japanese anime character, would be the size of the period at the end of this sentence.)
Zob
Posted by Zobovor at 9:42 AM

There's a Beast Machines Optimus Primal and Jetstorm set to come. There was only about a dozen characters total in the show though, so I can see why they wouldn't bother changing the plastic bubble. :)

I stand corrected! I bow before your astute observations, sir.

These reviews are sheer awesomeness! So, Primal, Cheetor, Jetstorm, Tankor . . . I think we need at least a Thrust. What maximal to go with him? Black Arachnia would work, though we've got her in the BW line. Hmmm. Maybe Botanica? We never did get a toy of her.

No problem, Zob, I had to take mine down and lok at it to make sure after reading your comments.

I actually think I might like a Rattrap Robot Hero. And he'd defeinitely have the have the wheel-feet.