The first part of “Dinobot Hunt!” was written by Simon Furman and drawn by Will Simpson, with colouring by Stuart Place and lettering by Annie Halfacree. It was edited, as ever, by Ian Rimmer.

The cover was by David Lloyd and is a collage of the four unaccounted for Dinobots, in dinosaur mode, looking suitably angry. The individual characters are well drawn, but I am not really a fan of the overall effect. I appreciate that the idea is to show that the Dinobots are scattered, which is why there has to be a “Dinobot Hunt” but I would have much preferred a single cover image. The background colour is very dark, as well, which makes the whole thing seem a little bit boring and thrown together, although it has to be said that this image I have here is not of the best quality, and the full-sized paper cover is probably more effective.

The issue itself opens with a group of soldiers in the Black Rock desert in Nevada. They are tracking an unknown power-source in the midst of a sandstorm - riding on little hovering platforms, which would be a bit incongruous in 2009, let alone 1986. They discover a set of pentagonal golden plates sticking out of the sand and try to gain access to the buried structure they are attached by means of a laser saw (these are some seriously tooled up guys).

Of course, these plates turn out to belong to Snarl, in stegosaurus mode, who is less than happy about this turn of events. He erupts from the sand in a very exciting splash page, that also contains the title bar. The soldiers are knocked flying and scattered all over the place. We experience this attack from the more intimate point of view of an unnamed soldier who ends up very close to the rampaging Dinobot. As he awaits death, he recalls his wife and child as Snarl’s foot descends... He is saved by a laser-blast from off-panel. He looks for th

e identity of his saviour and, when he sees a giant blue and white robot striding through the swirls of sand, disbelieves the evidence of his own eyes and concludes that it must be...

A MIRAGE! Trust me, that is a Furman original pun, not my own, and it’s a good one. Specifically he is saved by the trio of Mirage, Trailbreaker and Brawn, who are looking for Snarl. We get a view through the Dinobot’s eyes, who sees them all as blocks of huge dark pixels against a background of red, white and yellow. If this is how Dinobots always see, it’s surprising that they can ever tell Autobot from Decepticon, but no matter, it’s a pretty cool image. While the three Autobots try to pin him in, Snarl takes the initiative and charges Mirage, knocking him down and escaping into the storm.

At this setback, Mirage recalls the start of this mission, as he has to, in order to get the audience up to speed, but, unusually for one of these scenes, this one actually has mostly new material. It deals with the end of “The Icarus Theory” within the first couple of panels and then tells us the current situation. The Dinobots need rounding up, so Prime and Prowl have split the Autobots into four hunt 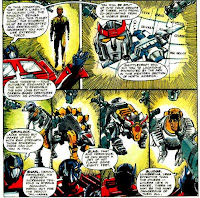 ing parties in order to find them. We then get a quite interesting roundup of the various Dinobots’ tactical capabilities (or “techspecs” if you will - since that is where the data comes from). Mirage’s unit have lost Snarl, but when they radio Prowl to tell him this, he is able to pick up the Dinobot on the sensors of his shuttle.

The scene changes to a military base somewhere in the desert, one “so secret you won’t find it on any map, civilian or military.” and we get one of Furman’s familiar tropes, the dramatic flash-forward. He tells us that “in twenty-five minutes, this base will cease to exist.”

Inside the base, General Carl Thompson is woken by a blaring alarm. We find out that rather than being concerned, he is happy that his base is under attack, because he does not agree with his current assignment - developing a new and more devastating bomb. So convinced he is, of this conviction, that he actually smiles when he sees Snarl on the rampage, knowing that it will take nothing less than “a full nuclear strike” to stop the maddened robot. It has to be said, at this point, that while what Furman is saying about personal convictions clashing with orders makes a certain amount of sense, the idea that Thompson is happy that the people on his base are being menaced by a giant metal stegosaurus, makes him an officer with very strange priorities indeed.

Snarl is immediately attacked with everything the base can muster, and he shrugs it all off with ease, smashing through a heavily electrified fence and munching on a tank. Thompson’s standing orders state that he must not let the base’s secrets fall into enemy hands and so he orders an evacuation and primes the bomb for self-destruct. He knows the codes backwards because he has practised them for months, hoping for the day he would be able to blow up his own base - General Carl Thompson is a depressin

Snarl continues tearing the base apart as the Autobots observe from a cliff. They elect to allow the humans to finish evacuating before attacking the Dinobot again but before they can move in Snarl senses a change in the atmosphere as the ground shakes, static builds up, and he is enveloped in the centre of a noiseless explosion of a kind that the Autobots cannot identify.

Astoundingly, Snarl managed to survive, staggering out of the blast in robot mode, before collapsing. As the Autobots wonder what happened, General Thompson arrives and explains that the bomb was a kind of molecular disintegrator before thanking them for doing him a favour. The Autobots are understandably perplexed as we cut to...

Laserbeak perched unseen on a rock, recording all that transpires, before heading back to report to his master...

As the first part of a four-part story, this one is fairly standalone. It is really only about Snarl in the desert and in those terms it works pretty well. The action scenes are well done and Simpson’s art really captures the grittiness and confusion of combat in a sandstorm. The panel of our unnamed hero soldier hitting the ground in a tangle of limbs and sand is particularly good. It is not the most precise drawing of anatomy ever seen, but it has a drama and animation to it that really works, and is common throughout these pages. Of course, praise also has to go out to Stuart Place, who’s sand clouds certainly look suitably sandy and oppressive. I have always been a fan of huge monsters that lurk under the desert sand (“Dune”, “Tremors” and a dozen others) and Snarl fills in very well in this story. The confusion of the opening attack is the best part of this issue and one of the best parts of the whole of “Dinobot Hunt!”

The writing is perfectly serviceable. Furman has never phoned in a script and this one is interesting enough while getting the ball rolling on the “Dinobot Hunt!” Thompson is not especially convincing, as he seems extraordinarily detached from the situation and while you might share his political views, you have to wonder why he agreed to the assignment in the first place, and why he has not quit before now. Explanations for those questions are certainly possible, but not forthcoming here, and Thompson is reduced to a character with a very odd thought proc

ess - becoming a weak character who needs a decision like that taken out of his hands by an outside force, rather than strong one with strong convictions, which is what Furman was more likely aiming at. After all, people undoubtedly die in Snarl’s attack on the base, and Thompson is still glad, going as far as to thank the Autobots. Other than that though, the script itself is well written, and the decision to focus on an individual soldier during Snarl’s attack on the patrol is the best one in the issue, adding immeasurably to the atmosphere of the scene.

“Dinobot Hunt!” opens with a solid issue that efficiently sets up the situation and gives the audience a couple of effective and well-drawn action scenes. Snarl’s fury is truly awesome to behold, and lets us know the difficulty the Autobots will be in for with the other Dinobots and I eagerly await for next issue. One down, three to go.
Posted by Bishbot at 11:17 AM

Furman sure does love the Dinobots, doesn't he? Funny how, as soon as he took over the U.S. comic, one of the first things he did was send Grimlock off on a quest to... yep, you guessed it, bring back the dead Dinobots (even though three out of five of them were not available as Action Masters toys!).