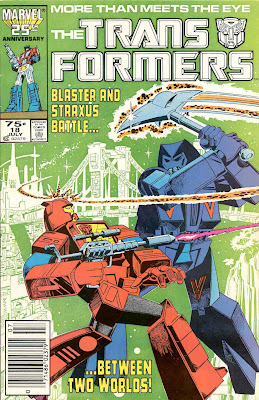 The Bridge to Nowhere! is the eighteenth issue of the US Marvel G1 run of Transformers. This issue more or less has the same creative cast from the last issue, which it is a direct continuation of. It was scribed by Bob Budiansky, with art by Don Perlin (pencils), Keith Williams & Vince Colletta (inks), Janice Chiang (letters), and Nel Yomtov (colors). Herb Trimpe again provided the cover.

And a lovely cover it is! Blaster and Straxus engage in a life-or-death struggle, electro-scrambler vs proton axe. They battle against a surreal green background, showing a bridge linking Cybertron to Earth. They really pop against the green, and the scene is both thematically and literally appropriate.

The issue itself, once again, lives up to the promise of the cover. The book opens with a human couple, driving through the beautiful Oregon wilderness. Perlin, Yomtov and Williams/Colletta do a nice job selling the majesty of Earth, and Budiansky's pen nicely compliments their imagery. This image is slightly jarring, since we're expecting part 2 of a tale set on Cybertron, while ironically lulling the readers into a false sense of security. When the coupe spies a huge bridge in the middle of nowhere, they decide to drive across, setting up the title splash page: this is literally a Bridge To Nowhere! Suddenly, we're pulled back into the world of bizarre alien imagery. The answer to what Straxus was building has been answered by page two. Further drawing us in, we see the outline of a Decepticon appear at the edge of the bridge and then explode, prompting the couple to drive off. Not a moment too soon, either, for the bridge vanishes behind them. 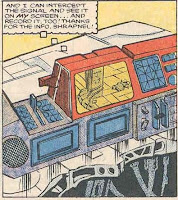 With that, we transition back to Cybertron, where we see the entire span of the space bridge. While Blaster watches (in an awesome Cybertronian mode), Straxus sends another hapless soldier to his death before Shrapnel figures out that there is a malfunctioning fuel line causing anyone who crosses the threshold from one half of the bridge to the other to explode. Budiansky sets this up as a character moment, to showcase Straxus' obstinacy, but it becomes an important plot point later. Back at the Autobot's base, Blaster tries to convince Perceptor to mount a rescue operation for Spanner, the missing transdimensional neutralist scientist. Perceptor, though, sees the bigger picture. Allowing the Cons free access to Earth means certain defeat, and Perceptor won't allow that to happen. Instead of a rescue operation, he orders an all-out assault on the bridge. It's nice to see Scrounge's death still weighing on Blaster's conscience. He's already come a long way from the robot who barely had time for an Empty last issue.

We are treated to an Earth interlude next. Robot Master makes another broadcast to the people of Earth, to keep them in the dark about the true nature of the conflict. He also complains to Megatron about his living conditions. This is cause for derision from Shockwave, who unexpectedly shows up with the seekers and the flying cassettes. In an attempt to patch over a continuity snafu introduced by guest writer Kaminski in issue #16, Budiansky has Megatron state that he dispatched Buzzsaw and Laserbeak to bring back the seekers, which explains their presence among Shockwave's troops. The confrontation between Shockwave and Megatron for leadership is put on hold, though, Straxus contacts them at that moment and tells them of imminent completion of the space bridge. Both Cons decide that this is too big a development to allow their differences to get in the way. It's also big enough that the perpetually self-serving Donny Finkleberg thinks that the Autobots need to be warned. But those are stories for another day.

As the bridge nears completion, the Autobots prepare their attack. Underneath the surface of the planet, Perceptor and the bulk of the Autobots drill towards Darkmount. On a bluff overlooking the bridge, Blaster stands alone. After tinkering with the foundations of the Decepticon fortress, the Autobots make their way to the surface. They quickly engage the enemy, who become enraged when their tower topples. Straxus personally leads the charge in a sort of flying wheeled cannon configuration, which is terrific. 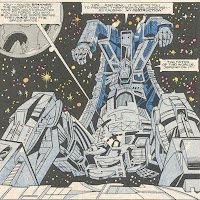 The frontal assault, though, is a diversion, pulling the bulk of the cons away from the bridge to allow Blaster to destroy it. There is a Spanner in the works, though. The space bridge is in fact built out of the body of the neutral scientist Spanner. In some horrible (good horrible) imagery, the bridge transforms to reveal the pained mockery of life that was Spanner. Straxus, it seems, is not without a cruel sense of irony. Spanner begs Blaster to destroy him, for he is in in pain and can't bear to see his body (and research) used for such perverse intent.

Meanwhile, Shrapnel has figured out the Autobots' plan, and soon Straxus is leading the hordes of Decepticons against the lone Blaster. Perceptor counterattacks even as Straxus orders the bridge operational. After Blaster is destroyed, Straxus is ready to conquer Earth. And so the image on the cover has come to pass, a battle between two worlds, with deadly interdimensional space on either side. Straxus seems to have Blaster on the ropes, until the 'Bot notices the same fuel line that caused the bridge to malfunction. Straxus is tricked into severing it, then booted across the teleportation threshold where he violently explodes. With the fuel line severed and no way back to Cybertron, Blaster, Perceptor and the minibots find themselves stuck on Earth. They greet the hastily assembled natives, military and law enforcement vehicles, even as the bridge vanishes. Blaster, though, laments that he was unable to help Spanner, making him easily the character with the most pathos at this point in the Transformers run.

Overall, this is an extraordinarily well crafted tale. It's not QUITE the pinnacle of perfection that 17 was, but it's quite nice. The mysteries from the prior issue are resolved in unexpected but satisfying ways. It's mostly a happy ending; a new batch of Autobots are on Earth, Straxus got the justice he deserved. There's the twinge of tragedy too, though, in the form of Spanner. Really, his fate is probably the most horrific of any Transformer in the comic run, though Megatron/Ratchet come close. Spanner beats them out, in my mind, if only because their situation is resolved. The one thing I'd leave out was the scene on Earth. This was a necessary scene . . . but not necessarily in this issue. I'd have rather seen it added to number #19 and gotten a bit more time on Cybertron. 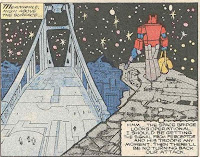 The art was very nice this issue. Cybertron looks beautiful. Blaster overlooking the bridge was a particularly pretty panel. I love that we got to see really neat Cybertronian designs for both Blaster and Straxus.

Next month, we're promised Optimus Prime versus the Decepticons! Megatron versus the Autobots, and the coming of ... OMEGA SUPREME! Even if you don't know the toys, how can you not want to find out what the heck the coming of Omega Supreme portents? I can't wait!

The Smelting Pool! is available for sale from IDW Publishing in  Classic Transformers Volume 2

That was another great issue. I was always pleased by the imagery that the comics space-bridge was a literal bridge, as opposed to the cartoon, and it really lets the battle between Blaster and Straxus become even more epic.

I had also forgotten that the bridge had been built out of a Transformer - what an excellent piece of imagery - truly horrific.

Yes, I do remember this issue, it was quite good. The Spanner situation was wild and scary to me as a kid. I really thought Blaster was going to do a mercy killing there!

Did the bridge really had to look like an Earth bridge?

And how big was Spanner before? Why did they even made a space bridge out of him?!

Even though it doesn't follow the cartoon cannon closely (that's just my nit pick), Budiansky uses some imaginative devices in his story's. Straxus for example is a pretty interesting character. I have to wonder where else he could have taken the continuity if he hadn't been flooded with more characters (more then any writer should be saddled with) later on in the series.

Has anyone else ever noticed how much Straxus's flying cannon mode looks like Galvatron? Coincidence, or... SOMETHING MORE?! (Dun dun DUN!)

Yeah, I noticed. He even has the trigger/weight arm on his back :)
I also love the fact that half his face (his "mask") can be seen in cannonmode.

The Spanner panel really shows that Budiansky is traditionally a horror person, I think. In Marvel terms, he's mostly known for his art on Ghost Rider, for instance. His covers for Transformers also always have a slight horror element in them. The Seacon with a gigantic maw aiming for Jesse, the Scraplets entering Blaster's mouth, the way Skullgrin is drawn on that issue where he becomes a filmstar... potentially quite horrific :)

Also nice to see that Vince Coletta worked on this issue. He was Marvel's go-to guy when something needed to be done last minute, so I guess Williams left the title half way through this issue. That would also explain the loss of detail on the final pages. When Straxus transforms back to his robotmode, there's hardly any detail on him. Typically Coletta. Speed was more important than detail when he was called in.

Next issue the replacement inkers arrive, and what a team it is... fresh off of 'Rom: Spaceknight', Ian Akin and Brian Garvey to me represent some of the best Transformers art and inking on the entire run of the title, with the possible exception of Stephen Baskerville.