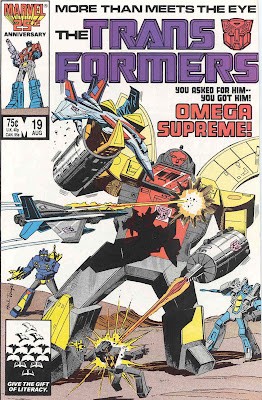 Command Performances! is the nineteenth issue of the Marvel US G1 run of Transformers. Bob Budiansky continues to script the book, and Don Perlin continues to pencil it. Ian Akin & Brian Garvey return for the first time since #4 to ink the book, with colors by Nel Yomtov and letters by Janice Chiang. Herb Trimpe once again draws the cover.

The cover is a bit disappointing to me. Omega Supreme stands amid a group of Decepticons, taking their fire and doing a pretty good job of mangling them. "You asked for him -- you got him! OMEGA SUPREME!" we're told. And while it's certainly possible that kids with the toy were writing in and asking for him, since he's never appeared in the comic before it feels like yet another new character rammed down our throats. The action is oddly static, and the angle doesn't really showcase Omega's size well. We see that he's bigger than the other cons, but they just wind up looking small somehow. Something to indicate scale might have helped.

The inside of the book, thankfully, does not disappoint. We start with a lovely Perlin splash of Omega Supreme in rocket base mode, outside of the Ark with all currently functioning Autobots in attendance. This includes the Dinobots, not seen since issue #8. 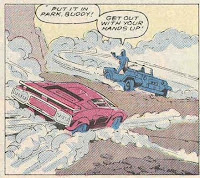 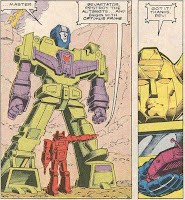 Command Performances! is available for sale from IDW Publishing in Classic Transformers Volume 2

Yeah, this issue is essentially one big toy advertisement for Omega Supreme. (I don't think the "You asked for it, you got it!" blurb is meant to be taken literally. It's a play on the old Toyota car commercial that used that slogan.)

I don't like how casually the Decepticon troopers were written out of the story. Granted, guys like Thundercracker and Skywarp were pretty much non-entities in the comics, but even at this early stage, Starscream was compelling and it's a shame to watch him get demolished just to make room for the Triple Changers, Battlechargers, etc.

It also bothers me heartless and dismissive Optimus Prime is about Skids. It's not really very Autobot-like.

Zobovor, I got a completely different vibe from Optimus Prime. In the last panel he says that he cannot celebrate, as Skids is gone. And he looks down and touched by it. I think this is meant to show Prime will have a hard time about this off screen later on.

He simply moved on because he had to, all the others would have been in danger if they'd stopped with Devastator still looming behind.

And in any case, it's better than the way he handled Jazz's death in the movie! :)


I loved this issue as well. Ian Akin and Brain Garvey elevated the art of the Transformers title to great heights back in the day, IMO. I loved how they improved Don Perlin's pencils (and José Delbo's for two issues). And things would only get better from this point on.