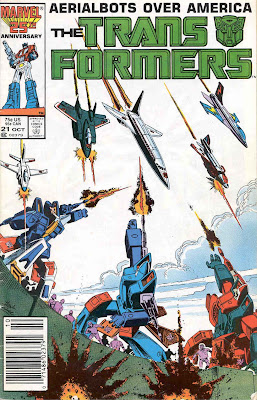 Aerialbots over America! is the twenty-first story in the Marvel US G1 Transformers saga. Unsurprisingly, Bob Budiansky scribes the issue. Don Perlin returns to pencil the issue, with inks by Ian Akin and Brian Garvey, colors by Nel Yomtov and letters by Janice Chiange. Herb Trimpe drew the cover.

And it's quite a nice cover, some odd perspective issues aside. Thrust, Dirge and Ramjet crouch atop a concrete structure, firing up into the air. Swooping down at them are the five Aerialbots, also guns blazing. It's a nice visual, and plays around a bit with the idea of who's on the ground and who's in the air.

The issue itself doesn't quite live up to the promise of the cover. We begin with an unnecessary splash of the Vasquez family. Ricky is getting ready to go to work, leaving his wife and daughter behind, while bombshell watches ominously from a very small leaf. Soon Ricky has a cerebro-shell in his cranium and is taking a detour to meet up with Megatron and the other Insecticons. As the assistant chief engineer of Hoover Dam, he is integral to their plans. Bombshell demonstrates his control by having the hapless human lick his feet, which the other Insecticons heartily enjoy. Bob sneaks in some exposition from a park ranger about how useful the dam is in terms of water and power. 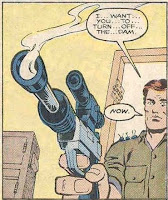 With Megatron in hand, Ricky walks RIGHT PAST SECURITY and enters the control room, where he orders the dam turned off.

And thus begins the problem with this issue. The plot doesn't make a whole lot of sense. It seems that Bombshell engaged in a 3-day stakeout just to sneak Megatron into a control room. Also, I know that this issue is before the sensationalism of workplace violence, but a security guard allowing a man with an obviously visible handgun to walk by strains credulity.

Meanwhile, back at the Ark, Optimus is getting repaired from the injuries he suffered in #19 while Donny Finkleberg tells them about the Space Bridge and the arrival of seven new Autobots. The Autobots are understandably skeptical, given that this guy DID try to convince the world that they were evil, but dispatch Jetfire to investigate anyway. Such thoughts are driven from their processors, though, when news of the Hoover Dam situation reaches them. Optimus dispatches the Aerialbots, fruits of the stolen combiner technology, to deal with the situation. He does this even though they're not finished being programmed and haven't been tested. 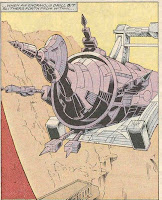 Before long, the recently repaired space bridge disgorges the conehead jets, who take up position on top of the dam, silent sentries. But the real horror is an enormous drill that begins to bore into the wall of the dam. The Aerialbots attempt to stop this horror show by engaging in an exciting battle that does a good job of showcasing the abilities of both sides. Inside the control room, Ricky begins to fight back against Decepticon control when it's revealed that the plan is to steal all the water, turning the American southwest into a wasteland. Unfortunately, this is another moment that makes little sense. If all the Decepticons wanted was water, why not open up the spacebridge over an ocean? This massive subterfuge accomplishes nothing. The fact that the dam itself generates enormous quantities of energy doesn't seem to be a part of the equation at all.

Before the climax, though, we see Jetfire and Donny at the landing spot where Blaster and co were disgorged. With no Autobots in sight, Jetfire is skeptical, but when some Transformer fuel is found, he becomes convinced. Still, we are invited to wonder at just what has become of the missing Autobots. 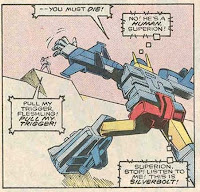 At the dam, the Aerialbots manage to drive off the Decepticon jets, then unite to attempt to destroy the bridge. Megatron orders Ricky to fire upon the Autobot gestalt, but the human hesitates. Meanwhile Superion sees a threat and moves to crush the human, but Silverbolt attempts to restrain the unfinished minds of the others. It's an interesting parallel, a devil on one shoulder, an angel on another. Ultimately Silverbolt disassembles Superion rather than allow Ricky to come to harm, abandoning struggle. Ricky, though, does one better. Bolstered by the presense of his daughter, he uses Megatron to destroy the drill and save the day. As the Decepticons retreat, Megatron is shocked that a human was able to shrug off Bombshell's control. Once again, Bob manages to bring humans to the forefront of the conflict and have them come out morally ahead of their Cybertronian counterparts.

Ricky is brought in for questing, though far more congenially than the situation warranted. The Aerialbots express their frustration at the battle, but Silverbolt assures them that they did something valuable - protecting human lives. Unbeknown to them, Bombshell is hitching a ride back to the Ark. This thread will have to wait, though, because we're taken to the hanger of the newly formed Rapid Anti-robot Assault Team, or R.A.A.T. We see a prone red and blue robot on a table, being operated on by some human mechanics. Their boss wants the face removed carefully - she's a perfectionist, you see. For turn the page and we're treated to a rather lovely splash ending; Circuit Breaker is building a trophy wall of Autobot faces. It's a great cliffhanger, and answers the question about what happened to the Cybertronian Autobots after issue #18.

Overall, I want to like this issue more than I actually do. The plotholes are just too glaring for me to ignore. The central conflict at the climax of the issue is interesting but doesn't resonate well for some reason. The art was enjoyable, but the ubiquitus coloring mistakes are actually starting to confuse the issue of who's who, given so many new characters. It's not one of the better issues. Next issue, we're promised the arrival of the Stunticons, the return of the Aerialbots, and a strike from Circuit Breaker. (All this -- and Donny Finkleberge, too!) It's amusing, but given the lackluster performance of the Aerialbots here, I'm not particularly enthused.

Aerialbots over America! can be purchased from IDW Publishing in  Classic Transformers Volume 2

It's strange how closely the Marvel Comics stories tend to parallel the Sunbow cartoon, even though there's no real reason to duplicate story elements beyond "giant robots from Cybertron that transform into cars."

The space bridge is one such concept. It literally looks like a bridge in the comics, so at least that's a different interpretation, but it's still trotted out as a standard plot device. Bob tended to use it to get new toys, er, characters to Earth, whereas in the cartoon it was primarily used to get the Earth characters back to Cybertron as needed.

The treatment of the Aerialbots is another oddity. Again, we have Silverbolt as the voice of reason and the other four as not particularly caring about the humans. In this case, it's because the other Aerialbots were sent out to the field without being fully programmed, so Silverbolt has to reign 'em back in. Does anyone else find it strange that the comic book Aerialbots are essentially clones of the cartoon Aerialbots?

The space bridge I can see - it was written into the show/comic bible, after all. Things like the Aerialbots not valuing human life, though, I can only chalk up to coincidence (or, if one is so inclined, serendipity.)