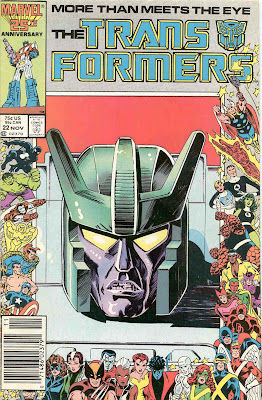 Heavy Traffic! is the twenty second issue of the Marvel US G1 Transformers series. The creative line-up is mostly unchanged from the prior issue. Bob Budiansky wrote the tale, penciled by Don Perlin. Ian Akin & Brian Garvey again provide inks, with colors as always by Nel Yomtov. Lettering duties passed to Hans IV, and Herb Trimpe again draws the cover.

Well ... most of the cover. This issue was part of the Marvel 25th anniversary celebration. You can see some other covers here. Keeping in this spirit, Trimpe drew a head shot of a Transformer - in this case, a toy-inspired Menasor. While Menasor is the villain of the book, probably Optimus Prime would have been the better choice. I'm also not keen on the vaguely toy-inspired drawing - I'd have preferred something closer to the character model. Overall, not particularly inspiring on its own, though in the historic context it's understandable.

The book itself opens by addressing an ongoing question - just what happened to Blaster and team after issue #18.

The title page is a splash, Circuit Breaker and Walter Barnett watching a video of the Autobots in question clumsily interacting with the local police vehicles. Circuit Breaker, unsurprisingly, interprets their actions as hostile. Barnett is a bit more open minded. As the book proceeds, we witness a R.A.A.T. (Rapid Anti-robot Assault Team) attack on the unsuspecting 'bots, culminating in their deactivation. It's an impressive show of force, all told. So impressive that Barnett is here to deliver to Josie a bonus check. However, she takes to the bonus only slightly better than she takes to the idea that perhaps the robots were non-hostile; she's not in this for the money. It's an effective opening sequence, reintroducing us to Circuit-Breaker while tying up some loose ends. It also introduces the theme of the issue, the things that people will do for money.

And speaking of loose ends, last issue Bombshell was seen hitching a ride on Silverbolt. Now, inside the ark, he watches Ratchet tend to Optimus Prime's wound, sustained in issue #19. He manages to slip a cerebro shell into the wound, but is only able to monitor Prime's thoughts. Prime's thoughts are, at the moment, focused on Donny Finkleberg's claim of 7 errant Autobots. They're still skeptical and want him to help find the missing robots. Donny isn't much interested ... until Skids takes his $25,000 cashier's check, earned for dressing up as Robot-Master. Oh, and while Donny's wallet is out, Bombshell sneaks in a homing beacon. Thus, outfitted with a special fuel sensor, Skids and a reluctant Donny head out. Wheeljack wonders aloud if the human can be trusted, prompting a prescient Prime to observe that until he gets a better offer, they can. It's a somewhat clumsy sequence, really. The Autobots have no real reason to need Donny along. It's true that he's not very trustworthy, but he did risk quite a lot to come and tell them of their companions. Their actions here just seem thuggish. They also allowed Bombshell to track them and ultimately disrupt the mission, so it wound up as extremely counterproductive on multiple levels.

But for now, Optimus is getting ready to Matrix the hell out of the Aerialbots. After their abysmal performance last issue, their minds have been completely wiped. Hang on. Let me repeat that. Their minds have been completely wiped, to the point where they need the life-giving properties of the matrix, presumably for the second time. Even Silverbolt, who had his programming completed, was effectively murdered by his commander. Once again, the way the Autobots value human life above their own appears bizarre and twisted. What kind of a species would have such self-loathing?

Ahem. Anyway, as Optimus transmits the matrix into the Aerialbots, Megatron takes advantage of the cerebro shell to clone the signal, giving life to the Stunticons. The dialogue makes it seem as if Megatron might actually be in possession of the Matrix at this point, though if that was the case it probably wouldn't have been necessary to have wiped Silverbolt's mind. We would later learn that the Matrix is a physical object, when Furman introduces that retcon much later in the series, so Megatron couldn't have gotten more than a good jolt of Matrix energy.

The fuel sensor built by Wheeljack functions well. Even in a heavy downpour, Skids makes progress. Donny, though, continues to complain, with money frequently coming up. Skids can't quite seem to believe that Donny has no other concerns than money, but the unemployed Finkeberg can't think of too many. They are interrupted when a traffic accident puts a driver in harms way. Skids breaks cover to remove some electrical wires, despite Donny's protests. I'll point out that Skids was willing to delay his mission to help a random human, and that there are ultimately dire consequences.

When the rescued motorist speaks to a local reporter, R.A.A.T. gets interested. Barnett thinks that perhaps they have been too quick to judge, but Josie just sees another target. Megatron, though, doesn't like the idea of positive publicity for the Autobots, and so dispatches the Stunticons. Soundwave asks if Megatron plans to destroy Skids, but Megatron is in full-on supervillain mode and has a plan that's 'far worse'. It does seem odd to me how concerned Megatron has become with public perception. This is the same mech that, in issue #4, strode confidently out of his fortress and dared the US Army to do their worst, emerging unscathed from their assault.

Hours later, Donny needs some rest, and Skids could use some shut-optic too. After showing Donny his on/off switch (whaaaa?), the pair power down for the night. That morning, there are a number of suspicious looking vehicles parked next to Skids when Donny turns him back on. Unfortunately for him, the Stunticons have picked up his scent. When they get caught in traffic, the Stunticons make their move. They begin rampaging through traffic, knocking earth vehicles aside with abandon and must certainly cause quite a few injuries, possibly some fatalities. Skids tells Donny to hide while he radios for backup.

Before the Autobots can put in an appearance, R.A.A.T. shows up. They attempt the same sort of attack that worked well on the Cybertronian Autobots, but Motormaster quickly counter atttacks. Circuit-Breaker enters the battle, desirous of drawing fire away from her men. She blasts two of the Stunticons, before getting BOKed by a truck. Donny displays some rare selflessness to run over to her to see if she's okay. When she his, he observes that they must be paying her a ton of money to go toe-to-servo with Transformers. Money, though, has nothing to do with her motivation. 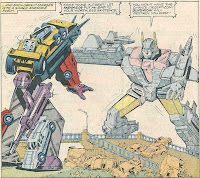 As the Stunticons close in on Skids, improbably still stuck in traffic, the Aerialbots arrive and join the battle. Josie calls for backup, prompting Donny to protest - he understands that the Aerialbots are here to help. The newly arrived Barnett thinks that perhaps Donny's on to something ... until the Stunticons surround Skids and loudly proclaim their intent to protect him with their lives! It's all Circuit-Breaker needs to confirm her worldview, and she hurls herself into battle with abandon. For both teams have united, and the first genuine Gestalt battle of the Marvel continuity is under way. Highway entrance ramps shatter and cars are hurled like rocks before they begin grappling with each other. Thus distracted, neither notice Josie levitating up to Silverbolts head until she empties her atomic battery, stunning Superion for long enough for Menasor to blast him point-blank in the chest; the mighty Autobot falls. It's a pretty kick-ass fight, with some great Perlin art and some bombastic Budiansky prose. 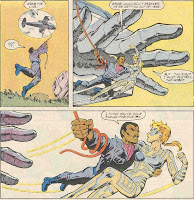 Menasor roars with triumph, but he hasn't forgotten Circuit-Breaker's attack on his components. He prepares to finish off the fleshling, but Barnett orders an evacuation. Channeling the spirit of Errol Flynn, he pulls the falling Circuit-Breaker out of harms way while dangling from a helicopter. It's so far out there that I don't even know if I love it or hate it ... I'm leaning towards the former.

Skids, meanwhile, grabs Donny and takes the opportunity to make haste away from this scene. Oddly, it's Donny who protests this, as Superion is just lying helpless. Skids points out that his instructions were explicit - the mission comes first. Alas, Skids, if you'd remembered that a day earlier and let that motorist fend for herself, none of this would have happened. Again, though, Autobots in the Marvel continuity demonstrate an almost pathological need to save human life while not valuing their own at all.

Fortunately for Superion, we learn via radio that Menasor withdrew shortly thereafter, apparently satisfied with having discredited Skids. Donny doesn't rate his chances for seeing this mission through, and despairs of getting his $25,000 back. He insists that they stop for another rest, and Skids eventually gives in. Once inside the motel, he Donny slinks over to a payphone and contacts Barnett. "How much for a sleeping Autobot," he asks, and is surpised to hear that the going rate is $50,000. A better offer ... poor Skids.

Alas, this was another relatively weak outing. There are some parts that work great, especially the clash of the titans. But many things don't work. The monetary theme doesn't really resonate in a book about alien robots fighting a civil war. The mind-wiped Aerialbots and then the casual way in which Skids abandons Superion seem extremely un-heroic. Autobots with off switches seems extraordinarily silly; if Autobots need rest, surely they have timers and motion sensors. Megatron's plan to discredit the Autobots seems unnecessary - why not just take the easy out and destroy Skids, or let him find the missing Autobots and then ambush them. I can't even blame Donny for betraying Skids - he went to them in good faith to help them, and they kidnapped him and stole a fortune from him to ensure his cooperation. Perlins art is pretty cool, and plays especially well in battle. Also, Circuit-Breaker is a treat to look at. Ultimately, though, it's not enough to make this more than a perfunctory outing.

Next issue, we're promised "Skids' fate revealed! Plus, Introducint the Riotous Runamuck and Runabout in Decepticon Graffiti!" I don't find myself caring much about Skids - I've already resigned myself to him being in R.A.A.T. captivity, but the ruckus promised sounds fun.

Heavy Traffic! is not available from IDW publishing, due to the appearance of the Marvel-owned character Circuit-Breaker. It is collected in the Titan collection, Transformers: Showdown

That's Menasor on the cover. Wow, I always wondered who that was supposed to be. I could never quite figure it out and thought it was either a generic robot or poor interpretation of Motormaster.

It's mind boggling to me to think that Marvel's been around almost another 25 years since that cover....

The whole Robot-Master story was one thing, but for Donny Finkleberg to be a recurring character for so many issues is an utter travesty. He's so useless.

In that shot of Menasor facing off against Superion, does it look to anyone else like Perlin meant for Menasor to be holding his gun, but Akin & Garvey drew it attached to his hip instead?

"Matrix the hell out of the Aerialbots." Heh heh. I love it when people verb words.

Drink a glass of beer every time you spot a scale error. :)

I felt Megatron's plan to discredit the Autobots was brilliant, albeit uncharacteristic of him. I mean, a huge part of why the Bots did so well in the cartoon was the way the humans unconditionally trusted them (Megatron's Master Plan excluded).