Both parts of “The Icarus Theory” were scripted by Simon Furman and pencilled by Barry Kitson. Gina Hart coloured the first part and Stuart Place the second. Richard Starkings continued his lettering duties and Ian Rimmer edited.

The cover to Part 1 was by Kev Hopgood and it depicts Optimus Prime, Prowl and Mirage under aerial bombardment by an enemy who occupies roughly the same space as the viewer, giving us a nicely unusual angle on a Transformers battle. Of course, as well as providing as with a visually interesting battle, this angle also effectively hides the identity of the character attacking the Autobots, which is crucial to the success of this story. If I had any complaints, I would say that the Autobots are a little smaller than they need to be, leaving a surprisingly large amount of empty space where there are no characters or explosions, but I appreciate the cover for the most part.

Part 1 opens with a man sitting on a rock fishing. He talks to himself, seething about some indignity that he has suffered. “Why don’t they listen?” he asks no-one in particular. The caption tells us that “there are no fish in Lake Dena.” The story flashes back to a day ear 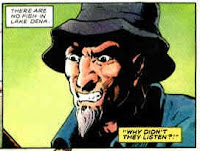 lier. The fishing man is dressed in a white lab coat, clearly giving some kind of demonstration as he points to a large projection of Megatron in battle. “This is where the future lies!” he says. We are told that this is “Roxxon Oil’s Research and Development plant, Portland, Oregon.”

The fishing man continues his demonstration, using a picture of Shockwave as an illustration of advanced robotics. He says that the press think the robots that have been attacking Oregon are under the control of some foreign power, but that he believes that they are actually sent by G.B. Blackrock, Roxxon’s biggest rival. Throughout this impassioned speech, the people he is talking to smoke, glance around, and just do not appear interested. He makes an attempt to get them back on his side by saying “I know what you’re thinking, Old Morris off on the same old tack” but it is no good, that is exactly what they are thinking, and they will not listen, despite his hints that he knows exactly how Blackrock might control a robot army, using a “Neural Relay Link.” We become aware that he has built such a device, but that his superiors will not allow him to use it.

Back in the present, the fisherman we now know as Professor Morris continues to curse his employers, before (and remember, “there are NO fish in Lake Dena”) he gets a tug on his line. At this success we flash back once more to an impressive full-page depiction of Morris sitting in a complicated technological contraption - a large domed helmet covering his head. Two smaller cut-out panels demonstrate the purpose of this machine: Morris is able to project his thoughts into a robotic body and control it from this chair - here he is practising using a model “years out of date” on a dummy. Morris’s anger is palpable as he beats the dummy into pieces. Back in the present - Morris hauls on his line - the catch is clearly bigger and more significant than he had dreamed.

Five days later, in the Ark, Optimus Prime is visiting Bumblebee, who is still being repaired after being seriously damaged by the Decepticons in the previous issue. It is a well-written scene, where Bumblebee, obviously idealising Prime, apologises for getting himself into trouble, while Prime assures him that he too made mistakes, and they should serve as a valuable lesson. This is a nice piece of continuity, because it continues the character development of Prime and at least shows Bumblebee on the mend, which will explain why he doesn’t appear damaged in the next story to come from the United States.

The next page is an innovative arrangement of panels which I have reproduced in its entirety by way of explanation. As whichever robot body Morris has found

in the lake flies uninhibited above a city, we see slivers of him sitting in his chair, feeling what it is like to soar in the air. We catch a glimpse of the front of the robot, a blue point with a prominent Autobot symbol.

Back at Roxxon, Morris, still in the neural relay chair, is surprised by a patrolling security guard. The guard accuses him of freelancing using Roxxon facilities without permission and tries to blackmail Morris. Suddenly, as Morris urgently thinks “no”, “No, NO”. the guard turns to see a metal claw heading straight for him. It catches him a blow on the head and his hat comes off in a gout of blood. Morris, stricken with guilt, kneels over the body and decides that he must turn himself in, but his desire for revenge comes upon him once before and he resolves to destroy Blackrock’s robots first.

In the Ark, Ironhide picks up an incoming airborne Transformer. It’s too small to be a Seeker jet and too big to be one of Soundwave’s tapes. The Autobots assume battle-readiness as Morris thinks to himself “Missiles away!” As the warheads detonate and the smoke clears the Autobots are thrown off balance as the last Transformer they expected to see comes screaming through the sky at them: Swoop, the Dinobot everyone thought had died when Guardian exploded (apparently above Lake Dena) is intact and attacking them!

I am a big fan of this story and the first part is predictably excellent. We see more of the humans than we have in the UK book for a long time and Professor Morris is a brilliantly realised character. When he first appears, muttering to himself about revenge, and drawn with a stereotypically evil pointy beard, the reader could easily be forgiven for thinking that we have been introduced to the villain of the piece. What becomes apparent, however, that certain anger-management issues aside, Morris is a basically decent, but misunderstood character, not to mention a brilliant scientist.

It is not hard to understand Morris’ frustration. He has managed, in the 1980s, to construct a machine for projecting his consciousness into a machine body. Such an achievement is staggering, and his bosses 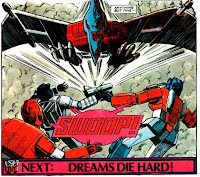 smoke their cigars and dismiss him utterly. He has already built the machine, why shouldn’t he use it, but they will not let him, even though he wants to use it to help their company, not for himself. Why a scientist attached to an oil-company has been given the time and funding to develop this technique is not really answered. He is there at the behest of “Roxxon-central” but you would think his research would be more oil-centric. Then again, perhaps the ability to drill for oil using disposable robotic bodies would improve safety and efficiency rates.

Morris is, of course, wrong about the Transformers being a conspiracy by G.B. Blackrock, but it is an understandable conclusion to draw. They are clearly inextricably linked with the other tycoon and Morris knows the technology to mentally control robots exists because he has developed it himself. With that data to hand, his conspiracy theory makes more sense than the real explanation of transforming cybernetic aliens.

The professor’s remorse at accidentally killing the security guard is palpable, thanks to some excellent line work by Kitson and that development of the story is surprisingly violent for “Transformers”. While the comics are not as death-free as the cartoon series, it is highly unusual to see a body lying in a pool of blood, as we do here, and while it is difficult not to feel extremely sorry for Swoop being made to attack his comrades, it must be remembered that as far as Morris knew, the Transformers are mindless drones, like the robot in his lab.

The level of technology on display is somewhat implausible, perhaps even more so than Circuit Breaker, but I can accept a bit of made up science for a decent story (although the idea of the very sophisticated robot in Morris’ lab being an “obsolete model” does make me laugh - we haven’t seen any human designed robots before - what are the non-obsolete models used for?).

Furman’s scripting is typically excellent and he uses flashbacks and repeated memes (“there are no fish in Lake Dena”) very effectively, creating a pleasingly dense narrative for only eleven pages. We really get a complete picture of his Professor Morris, who will continue to be important in more than just the coming conclusion. The reveal of Swoop is fairly well done, although it is pretty easy to see who it is from the image of his symbol and his claw, if you know your Transformers at all, and, of course, when he "died" there was no body which is comic-book shorthand for "still alive somewhere".

Kitson’s art is good, I particularly like his design for the “neural relay chair”. I am not e

specially impressed with any of his panels featuring the Autobots, but they are few in this issue, and he draws humans very well. The level of ignorance and frustration on display as Morris tries to explain himself to his superiors is very well realised and frequent shots of Morris’ glowering eyes underneath the hood of the chair really project his turbulent mood. Hart’s colouring is typically great, but I do not like Ironhide having a red face, it makes him look too plain and does not work anywhere near as well as the cartoon grey (but a lot better than the sticker on the toy).

This is a classic story and not at all hard to get hold of because it has been reprinted three times recently. Once in Titan’s excellent “Dinobot Hunt” collection (out of print), and again in IDW’s “  Transformers: Best of the UK - Dinobots

Look out tomorrow for the review of the conclusion to this story, as an apology for slacking off of late.
Posted by Bishbot at 11:13 AM

The fact that an oil company bankrolled Professor Morris's unorthodox research becomes less surprising when one considers that it is Roxxon that we are dealing with here, a well-established corrupt company from the main Marvel universe, which has been responsible for creating superhumans and formulating evil schemes as well as doing everything oil companies normally do...