Part 2’s cover was by Jeff Anderson and it depicts Swoop getting the drop on Jazz and Wheeljack. The Dinobot is in Pteranodon mode, still obviously scarred from the destruction of Guardian and is attacking in a savage fury. The action on the cover is well portrayed - both Jazz and Wheeljack look sufficiently surprised and panicked, but the picture is a little dark and shadowy, which is odd because this fight takes place outside the Ark. The shadows are well drawn, however, and the characters look like themselves - although Jazz still has screw-holes in his shoulders.

The issue opens with a recap of the previous one. These pages are usually skippable if you know what has happened but Furman does at least try for an innovative style here - contrasting Swoop’s sacrifice during the battle with Guardian with Professor Morris’s professional frustration. The final two panels where we are told that Swoop “fell from grace” and Morris “found a way to fly” are a little over the top, but in a good way, and I certainly don’t begrudge Furman having fun with these tedious “story so far” segments.

Back in the present, we are presented a full-page splash of Swoop fighting Autobots in hand (wing?) to hand combat and looking sufficiently battle-scarred and savage. A little portrait of Morris hovers in the top left, reminding us that Swoop is still under the scientist’s control. In a cut-out panel at the bottom, Optimus Prime marvels as the Dinobot gets the drop on his comrades. Deciding that Swoop was always loyal, even if at times brash and arrogant, Prime correctly determines that he must be under enemy control and orders the Autobots to restrain him without using their weapons. A very oddly drawn version of Trailbreaker reacts by trying to grab Swoop, but he is smashed into the side of the mountain. Prime orders Hound and Huffer to give Swoop “the Autobot one-two.”

Back in his lab, Morris is overcome with the thrill of battle as he attempts to destroy the machines that he still assumes are automatons under the control of G.B. Blackrock. He seems to be

going slightly mad, drunk on the idea that once he has destroyed these robots, no-one will ever push him around again. Hound, bravely standing in Swoop’s way, unleashes a bright flare that overloads the Dinobot’s optic sensors and, consequently, disorientates Professor Morris. Huffer follows this up by socking Swoop in the beak. The Dinobot falls to the ground and the Autobots pile on top of him, holding him down.

This gambit fails to pay off, however, as Swoop is able to brush the Autobots aside and ascend once again. Optimus looks on, wondering if the only way to stop Swoop will be to order his troops to kill him. This suggests an idea to Prime, who, presumably in his most authoritative voice, commands Swoop to Transform and land. This order seems to get through to Swoop, who, in his eagerness to disregard it, is able to break Morris’ mental hold, while Prime urges him to fight it.

The next page is an excellent splash of Swoop tearing out of the crater of Mount St Hillary with his robot mode face and Morris’ superimposed on the sky behind him, both screamin

Later, the Autobots drive down a highway, tracking Swoop’s signal. Hound asks Prime how he managed to get Swoop to listen to him and the Autobot leader reveals an interesting bit of back story: Prime used to be Swoop’s commanding officer in the Autobot “Elite Flying Corps” back on Cybertron, back when Swoop was named Divebomb. Swoop hated Prime with a passion and loathed following his orders and thus Prime reasoned that an order from a commander he hated might jolt him enough to regain control. It is interesting to see the seeds lain here for stories that would not happen for another couple of years. In “What’s In A Name?” from the 1988 annual, it becomes established that an unnamed Predacon stole Divebomb’s name after besting him in battle while still on Cybertron, forcing him to take a new name. It seems unlikely that Furman was planning such a storyline so far in advance, especially given that the Predacon toys were not out at the time of writing and they had not debuted in the cartoon. As such, it stands as a throwaway piece of writing that was most fortuitously placed.

Swoop catches up with Professor Morris and coldly tells him “You’re dead.” As Swoop prepares to terminate him, he babbles an explanation, that he thought the Autobots were Blackrock’s pawns, and then, finally, he accepts his fate, because he killed the security guard. Close-ups on Swoop’s face and eyes very effectively show the turmoil he is feeling. He wants revenge, but he cannot quite bring himself to kill this defenceless human.
As the Autob

ots pull up to the Roxxon facility Swoop comes outside and dumps Morris on the ground at their feet. Prime is amazed that a human could achieve such a feat (and who can blame him?) and Morris explains his reasons, and how the feeling of flying, of being in control of Swoop became too addictive to give up. “(I) like Icarus found that my wings were made of wax.” he says, bringing the title into its full meaning. Prime does not blame him for controlling Swoop, since he did so in ignorance, but tells him that any crimes he committed as Swoop must be punished according to Earth’s laws. Ratchet tells Swoop that he will repair his bodywork when they get back to the Ark, but, unexpectedly, Swoop lunges for him, transforms and launches himself skyward! Morris assures them that this is not his doing, but Prime tells him to use his machine to bring Swoop back. This is achieved successfully and the Autobots leave Morris to atone for his crimes - we see him smashing his machine as he awaits the authorities.

The next day, Ratchet has completed his analysis of Swoop and tells the Autobots that “his cybo-drendrons have burnt out.” having become corroded by spending millions of years submerged in a tar pit, causing him to lash out. Prime says that this is “terrible!” but Ratchet is not worried; he says the damage is reparable. Prime, however, points out that Swoop did not lie in that tar pit alone. Somewhere the other four Dinobots must have been similarly affected and now roam the countryside as a considerable threat to human life. “The war with the Decepticons can wait.” says Prime, “We must find the Dinobots!”

A great conclusion to a good little two-parter. Although the story he was absent for was still good, Furman is now back with a vengeance, generating an excellent story in “The Icarus Theory” while setting up his upcoming four-part epic: “Dinobot Hunt!” Anything about our characters’ lives on Cybertron is worth exploring and it was very interesting to see that Optimus Prime used to be Swoop’s direct commander (although it is unexplained how the extremely ground-based Prime got to be in charge of the “Elite Flying Corps”). The fact that Prime uses Swoop’s antipathy towards him to get him to fight is a good twist on the trope of an old commander bringing a former subordinate back into line (see “Rambo” among many others). Furman could have used the idea that Swoop respects Prime, but this is more innovative and just so much more Dinobot.

Morris’ fate is believable and human. His difficulty in letting go of Swoop is entirely believable: how incredible would it be to experience those things, and how hard would it be to give it up? The audience, like Prime, believes that he will submit to the authorities. He is not a 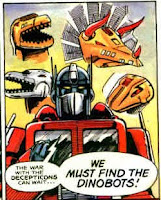 criminal, but a scientist who made a mistake. The reader really feels bad for him at the end, having to smash his machine and then wait for the police, but at least he goes out with dignity.

Swoop not being able to kill the human who controlled him is very much in character. The Dinobots are savage warriors, but they are very honourable, and Morris is too pathetic an opponent for Swoop to simply execute him. Swoop’s slightly impotent rage is portrayed excellently by some brilliant line-work by Kitson and sparse scripting from Furman.

The art throughout is more than adequate, and very good in parts, although there are some odd moments. Where, for example, does the character model for Trailbreaker come from? It looks nothing like either the cartoon or the toy. he is the wrong shape, the wrong colour, and he doesn’t even have the distinctive silver parts on top of his head. Similarly, Optimus Prime is portrayed in his Earth form in the Cybertron flashback, which is disappointing. Other than that, however, Kitson does a decent job, and his splash pages are particularly arresting. There is little difference between Place’s colouring and Hart’s and this issue fits perfectly with the previous one, artwise.

So, basically, read this story:

Once again: it has been reprinted three times recently. Once in Titan’s excellent “Dinobot Hunt” collection (out of print), again in IDW’s “  Transformers: Best of the UK - Dinobots

Next week: The Dinobot Hunt begins!
Posted by Bishbot at 5:56 AM

I am reading your reviews, Bishbot, but I'm afraid I don't have a lot to say about them since I'm not familiar with the stories in question. I will say that your reviews are quite thorough, and it's nice to learn more about the UK issues.

I will just throw out there that Jazz's animation model does have the "screw holes" in his shoulders, so that element of his design isn't an error.

I love that cover.

Dunno why exactly, but this 2 parter just bores me. :/

That's a shame D.M. I think it's pretty good - and sets up good things for the future, of course.

Always one of my favourite stories of the entire Marvel run. Has there ever been an Autobot as cold as the three panels where Swoop stares at Morris before stating, flatly: "You're dead."