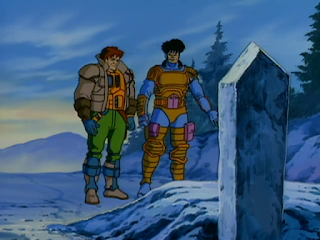 "Bronski, your dumb plans are gonna get you some day. I only hope it's not today."

The Art of War is the forty-sixth episode of Exo-Squad, and the last character-focused one before the endgame. Bronski & Takagi are tasked with bringing explosives and a demolitions expert to the resistance, to blow up a new Neo base at an unknown location in northern Canada. The methodology, booby-trap some supplies headed that way. The monkey-wrench, General Livia is using the train to bring great artwork to Phaeton City, which greatly angers Phaeton and presents a dilemma to our heroes. They booby-trap the particle accelerator being shipped, steal the art, and then let the Neos blow the train to the bottom of the Bering Strait. Along the way, romance blossoms between Wolf & Eve Hanley. 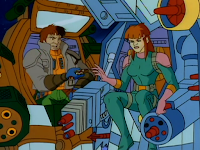 What Works: I like the idea behind this episode, in theory. A little breather, check in on the resistance, give Bronski a chance to bond with someone. And the execution is basically solid. (But, see below.)

It *IS* nice to check in on the Resistance, especially absent Napier. (I like Napier, but he tends to dominate.) With him gone, Eve as leader of this cell works quite a bit better. Here you see all of their frames. Left to right: J.J. in a utility frame, Jinx in his firefighter frame, Tanaka in his samurai frame, Voodoo in an intelligence frame, and Picasso in the troop transport frame. Oh, and of course Even in the quite beat-up Aerial Attack e-frame that probably was once owned by Marsh. 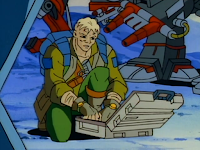 J.J. and Picasso in particular get a chance to shine. J.J. again comes across as quite clever and a bit snarky. And how could one in good conscience do an art-themed episode and not feature an established graffiti artist named Picasso?

Eve and Wolf basically works. He's the working-class schlub, she's the cultured good-girl, but thrown together in war and sure, why not? The series never quite gets a home-run in its attempts to do romance, but I do appreciate the effort. Nice use of the aurora borealis. 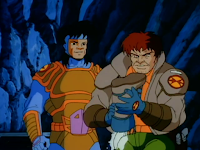 Kaz and Wolf's friendship is firmly established by this point, and in many ways Kaz is now the alpha of the pair. They've come a long way from the first episode's "don't cramp my style, kid" with Wolf happily cheering Kaz on as the kid comes to his rescue yet again. "You're the man, Kaz," he unselfconciously cheers. I'd have liked the series to spend a little more time on Kaz. He always struck me as the most talented of the squad at flying, and I'd have liked to see that idea explored more. It's there, in the background, but could easily have made an episode or even a story arc. 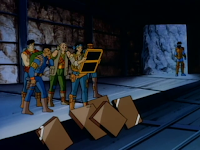 The art in the episode is a nice idea. Could the resistance blow up irreplaceable bits of human culture? Yes, if they had to, but it's worth them taking risks to preserve some. And I rather like the Resistance taking a moment to stop and appreciate it, despite themselves. Note Takagi waiting forlornly for Bronski to return.

Livia gets more development this episode. Me thinks she came quite close to death with her little bit of initiative here. The fact that she didn't know how important this train was to Phaeton hints that he's keeping secrets from her; this will be confirmed in a few episodes. Phaeton's reaction, to have the artwork she diverted destroyed, speaks again to his deteriorating mental state. Why waste the resources if it's unimportant? He's becoming petty.

There are a host of nice details in this episode. Tiny, but well executed. I love the idea of a Bering Strait Bridge.

There's a moment when the Neo villain of the episode, a low-ranking officer named Sardis, lands and a Neo with a shoulder-mounted camera runs up to him. I love that attention to realism. 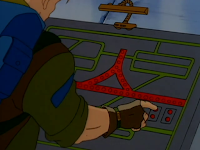 And speaking of attention to details, the series takes a few seconds to show Bronski & J.J. reverse the train in an abandoned uranium mine they're hiding in. Necessary? Probably not, but it doesn't slow down the episode and feels kinda neat, so why not? 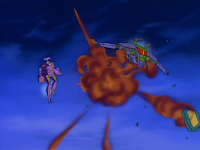 What Doesn't: The fight at the beginning of the episode once again feels totally perfunctory. Yes, it gets their demolition specialist killed, but really, this mission could have been given to Wolf & Kaz and the episode would have proceeded just fine. I do like that Wolf's not able to prevail with 3:1 odds and needs Kaz's help. 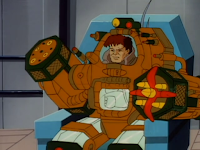 Wolf's riding inside the shuttle, rather than providing an escort. Why? It's a very silly visual. And, sure enough, the shuttle is spotted and gets attacked, so he just has to launch and engage. Since e-frames are capable of re-entry, it felt like it just slowed down the episode. 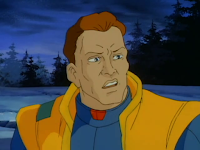 Able Squad has an abysmal record at keeping fellow members of Exo-Fleet alive. This time it's Van Owen, their demo expert. It's starting to feel repetitive. 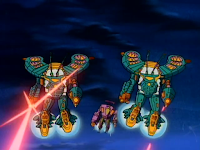 Watch For: There are a couple of the Thrax-style frames under Sardis' command. I don't think we've seen them used for generics before.

The relationship between Wolf and Eve will continue.

The Great Slave Lake (what a great place to choose!) facility the Resistance struck will be seen again, and will prove to be critically important.

Bio: Colleen O'Reilly, again, a character not in the episode, again. A repeat of the Bronski one would have been the ideal choice, or one for Takagi or Eve or the Resistance if one's inclined to be wishful. 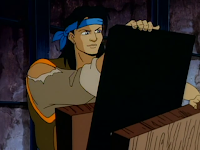 Overall: Decent. There's basically nothing wrong with it. The strong points are strong, the weak points are unimportant. Despite this, there's something that I can't put my finger on that makes me not love this episode. It's not one I ever just pop in and rewatch, and after my analysis I can't really say why. Maybe it's just too late in the series for a character-themed episode. Perhaps if it was just slightly earlier in the series, it'd work better, Perhaps between The Perfect Warrior and The Price of Courage. (That'd give the Neos more time to repair the damage to the Great Slave Lake facility too, and create a nice little mini-trilogy checking in on the three big Neo Sapien generals.)
Posted by Jimtron at 2:14 PM

Keeping an e-frame inside a shuttle would make sense if our heroes were trying to conceal their actual numbers on Neo early warning systems.

What doesn't make sense is an e-frame sized chair to sit down in!