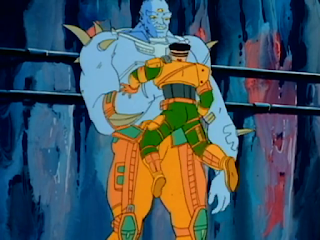 "You cannot win, Terran. I am bred to fight. You are nothing but a genetic accident."

The Perfect Warrior is the forty-third episode of Exo-Squad, and concludes the two-parter started last time. Marsh has lost the test, and Galba manages to save him by revealing his true identity. He then ambushes the guards taking him to Phaeton, allowing Marsh access to Takagi's Exo-Wing. Marsh calls in the troops, but mostly wrecks the installation himself by blowing up the geothermal plant powering the facility. Stavrogin, Marsala, and DeLeon rescue him, while Praetorius vows to build a new brood center producing nothing but Neo Lords. 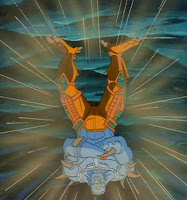 What Works: The Neo Lords continue to shine. They demonstrate a few new tricks, including flying and using their claws to stand on the ceiling. They're what the Warriors should have been from the beginning, a terrifying fusion of man (well, Neo Sapien) and beast. I like that they're tough, but not TOO tough. That aspect remains my main criticism of the Neo Warriors, especially in their introduction. Sorry to keep harping on it, but in a show as continuity-rich as Exo-Squad, it's harder to forget missteps like that. 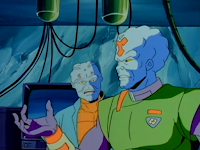 Galba and Praetorius continue to have an interesting dynamic. Galba casts about, seeking a reason to save Marsh and eventually finding one. He convinces Praetorius that the terran fought perhaps too well, and might in fact be Marsh. Praetorius vows to send him to his fate. "Phaeton will know him." Later, when Marsh escapes, Praetorius realizes there's a traitor on his base, and must surely suspect Galba, if only because of the fate of the rest of his brood. Still, he plays it cool. 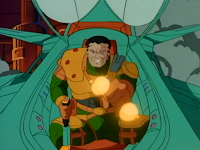 Marsh kicks some serious butt here. He basically wins the day single handedly, and merely needs his team to survive. He's great in the Exo-Wing, but equally great outside of the cockpit. (Though, see below.)

This episode is replete with terrific details. One is the Exo-Wing getting shot up. A Neo with a hand blaster clips one of the forward-mounted guns and blows it up. A lovely touch, and not a plot point because, heck, it still fires. 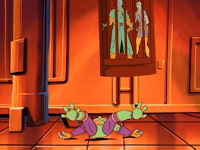 Another nice detail: the casualties. Marsh chases some Neo scientists away, but a guard stands his ground. Ooof, direct hit. Yeah, he's not getting back up. The scientists wait for him too, until he gets shot, then they're pushing the up button on that elevator but quick. We also see a random jump trooper nailed during the assault. Admittedly nothing particularly new for this series, but often death is implied or at the epicenter of an explosion. These are just shots to the chest.

The dialog is particularly on this episode. I had a heck of a time comping up with the most representative quote. (As opposed to last time, where I felt like I had to kinda go with a merely mediocre quote.) My second choice isn't quite as good for the episode, but might be the perfect quote to sum up the series: "I created the perfect warrior, Galba, the perfect guardian of the Neo Sapien Order, and one imperfect Terran destroys everything!" 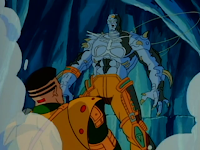 On the subject of great dialog, one of the Neo Lords Marsh bests comes back, burned and battered but alive. I love his gloating before he drops Marsh down a precipice: "you may have destroyed one of my wings, but I still have one more than you." Hard to argue with that. 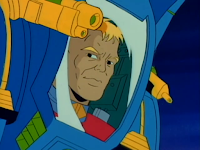 Stavrogin getting thanked by Marsh for keeping his squad alive was a nice element, and a nice way to end the Stavrogin story arc. It's clear he's taken aback by the praise, and that it means a great deal to him. That's a lot to accomplish with some animated body language and a line of dialogue. Oh, and he got in a nice little zinger of his own, after J.T. orders him not to risk the squad in a rescue. "Orders are subject to interpretation, and my interpretation is that he meant not to risk the WHOLE squad." Well played, Yuri, and a nice blend of his former irresponsible self with his new leadership role. 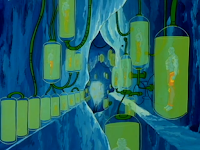 Finally, the last image of the episode is arresting. Tube after tube of stillborn Neo Lords, dead in their fluids without ever having lived. It's almost tragic. Almost. 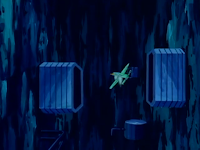 What Doesn't: The first commercial act ends on a terrible cliffhanger. Marsh gets to a point in the base where he has multiple options and mutters, in quiet horror, "oh, no, dead end!" First off, it's not. Secondly, when we come back from commercial, he says (in a much more jaunty way), may as well pick one. Yeah, exactly. Very awkward. 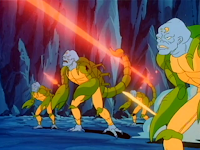 The Neo Scorpions are shooting lasers from their tails. Guh? Incidentally, I'm trying to recall, but I'm not sure if we actually see any more Neo Warriors after this episode. I mean, we probably do, but none are sticking in my head. The Scorpions are the only Warriors we see this episode, probably to keep the focus on the Lords. Praetorius' hawk #2 is nowhere to be seen.

Watch For: Yuri will be back for a swan song. 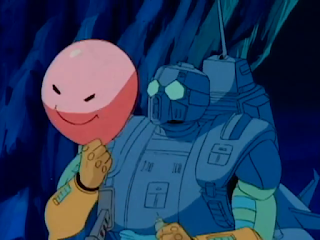 Bio: Vince Pelligrino. He's in this episode, though he doesn't have a whole lot to do. Still, all-new animation, and given how little we know of him from the show the bio is mostly stuff we didn't know. Also, hey, it features the Draconis e-frame type in purple, which may be the only time his frame type shows up being piloted by anyone other than himself, so that's kinda neat.

Overall: Very strong. Criticisms are odd nit picks, strengths go to fundamentals. The Neo Lords may not be here in force, but they are here, and here to stay.

The best quote to pick from episode 2_29 would have been Marsh (posing as Takagi): "I can do anything JT Marsh can."