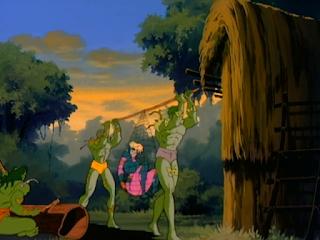 "Do you know what life is? Life is a river, a dark river that flows inside us, changes us, then, in the end, it drowns us so new life will form."

Dark River is the forty-fifth episode of Exo-Squad. Seeking to find a weakness in the Neo Lord's genetic code, Marsala, Marsh, and Burns head to the Amazon jungle searching for Dr. Ketzer. They find more than they bargain for, when they discover that he and the natives have held out against the three-year-long Neo occupation through genetic engineering. Nara is exposed to the same mutagen Ketzer uses on himself, much to the squad's horror. An assault by Draconis, reduced to command of the Neo's Manaus garrison, gives Ketzer time to flee into the jungle, the mission a failure and Nara's future uncertain. 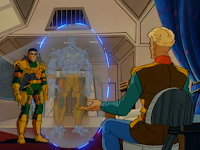 What Works: The basic premise  is solid. The Neo's have a new weapon, the fleet naturally wants to break it. I also like the idea that Algernon has no idea how to go about this. For once, he's not a master of every science, only physics and engineering. Which, to be fair, is still a massive portfolio, but cutting off biology still feels like playing fair. No doubt it's motivated by a desire to get Ketzer into the series, but I'll take what I can get. Which brings us to his choice, the top terrain geneticist...

Dr. Albrecht Ketzer. Note that Albrecht means bright or noble, Ketzer means heretic. Quite apt. He came to the rain forest to test the use of rare plants in gene therapy, and managed to stay underground when the Neos came. We quickly learn how. There are strong overtures of Conrad's Heart of Darkness here, with his exploitation / aid to the natives. The vocal performance is strong, befitting a character whom they no doubt intended to be important in season 3.

I especially love the slow reveal of Ketzer. Once again, the series realizes that too much too fast might lose the audience, and so we see him first in silhouette, then just his hand, before he finally boldly marches into Nara's presence. 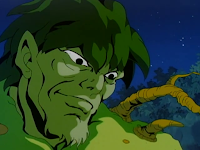 The plant folks are pretty neat too. They do indeed seem stronger and more durable than ordinary humans, and given the environment it's easy to see how they might be a match for armed Neo Sapiens. 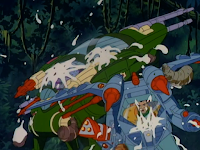 They seem to use a mix of primitive weapons and ultra-modern gear captured from their enemies. They certainly are no stranger to blasters, but also employ gourds, tripwires, blowguns and the like. It's an interesting mix. I rather like the brief debate on the morality of the transformation. "You've turned them into freaks, robbed them of their humanity!" "I've helped them to adapt, to improve!" 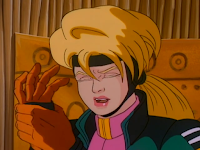 Nara gets something to do. It's clear the writers like the character, but it's also clear they didn't know quite what to do with her after the Venus arc. Giving her a mutagen is an interesting development. It is slightly hampered by not getting a ton of payoff this season. The writers play pretty fair with her exposure to mutagen, with her several times evidencing discomfort in her right arm before Ketzer's big reveal. 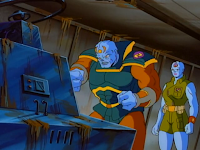 It's good to see Draconis again. True to his word, Phaeton dusted off another Draconis clone following his attempted coup at Venus. Now we learn where Phaeton stuck him, the ass end of Earth. "A clone of my talents should not be punished for the crimes of another Draconis," he grumbles. That's an interesting philosophical point. His temper is certainly intact. 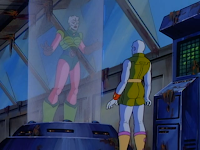 He has an interesting relationship with his second, Medusa, who is apparently Livia's woman. She reports him as disloyal, and Livia sends a squad of Neo Lords to remove him from command. This isn't actually entirely fair to Draconis, who may grumble about a crappy command but is basically doing his duty to Phaeton. It does help establish Livia as her own character, and a dangerous one to boot. 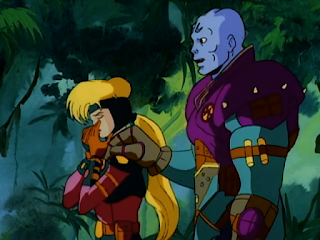 The Marsala / Burns relationship takes another haltering step when Marsala offers Nara comfort. It's what's inside that matters, he says, not appearances. It's sweet, but Nara misses the subtext and loudly rebuffs him. "They matter to me!" Oops.

Marsh manages to stay very focused, despite clearly being uncomfortable with the "ally" (whose work he describes as "against the laws of nature") they're tasked to bring back. I like that, even during a battle with the Neos, he keeps his eye on the prize and has Marsala nap Ketzer rather than fight neos. 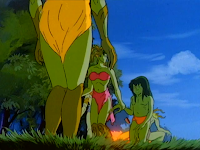 I like how much of the plant folk we get to see. From their very first shots, in battle with the squad, we catch snippets and glimpses. By the end, we actually see that they have civilians, women and children who don't seem to be involved in the fighting. 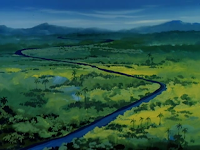 What Doesn't: The ending is a bit too abrupt for me, cutting back to a wide shot of the Amazon while Marsh screams for the just-escaped Ketzer. The first time around, I genuinely expected them to come back next episode right where this one left off. Even after they didn't, I was left wondering if I'd missed an episode, or perhaps the series was being aired slightly out of order. Nope, they just failed. The logic works, there's no reason to show the squad hunting for him and failing, but even still, an extra line of dialogue here or there might have clarified things.

The Neo attack at the beginning of the episode feels perfunctory. 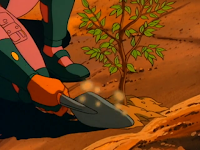 Medusa is among the many Neo Sapien geneticists Algernon scrolls through before getting to Ketzer. This is not an animation error; if it were, she'd be the same character model on the screen as in the episode. It makes a lot of sense for that to be her background, given that Ketzer is the only thing of strategic importance in the episode. I can also completely buy that the field of genetics is dominated by Neo Sapiens. Not only are they smarter, but it's going to be closer-to-home for them than for any terran. 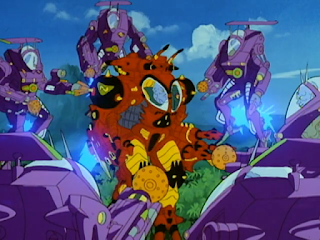 Despite his (second) death, the series isn't done with Draconis yet. Having it accomplished at the hands of Neo Lords point to their continued importance in the series. Also note that, had they joined Draconis in his hunt rather than assassinate the not-particularly disloyal Draconis, there's an excellent chance they could have nabbed Ketzer, Marsh, and Marsala, three very valuable prizes.

Finally, of course, Nara's mutation and Ketzer's forces will continue to play a role in the series moving forward. But that hardly needs saying at this point, does it?

Bio: Marsala, again. He's in the episode, so that's something. I suppose Marsh, Burns, and Marsala all feel pretty tired by this point, so unless they wanted to make one for Draconis it's not a terrible choice for filler.

Overall: Strong. Very strong. It gives Nara something to do for the rest of the series, gives us another look at an interesting villain, and allows the good guys to fail for a change. Admittedly there was plenty of that early on, but this late in the game the Exo Fleet has been mostly steamrolling the opposition. That makes good logical sense, but the occasional reversal reminds us that it's a chaotic universe and nothing is certain.
Posted by Jimtron at 1:23 PM