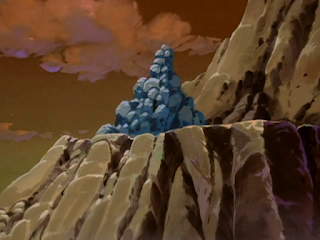 "You were the best of 'em, Shiva. Too bad you didn't serve a better cause."

The Price of Courage is the forty-fourth episode of Exo-Squad. A stand-alone offering, it propels the story aggressively towards the endgame. Shiva is summoned to Phaeton, not to be executed, as he surmised, but to be given command of the remains of the Neo spacefleet. He is to retake Venus, using a solar flare to approach without being detected. He lucks out, approaching when the Resolute II is shut down for maintenance and the bulk of the Exo-Fleet is on a diversionary run towards Earth. Nonetheless, Marsh and Simbacca mount a successful defense. The back of the Neo fleet is broken, opening the road to Earth. Shiva himself crashes on Venus and dies, despite the best efforts of the Exo-Scouts to get him to a doctor. 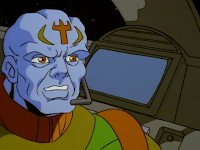 What Works: Damn near everything. This is about as perfect as a stand-alone episode of Exo-Squad gets. Let's start with Shiva. Only Exo-Squad could give us a character named for a god of death with a freaking pitchfork on his head and make him sympathetic. His journey from monster to sympathetic figure has been accomplished through remarkably few appearances. He was calculating and ruthless throughout, and used Terrans like Amanda Connor and Diana without remorse. But the Australia arc showed him to be compassionate to the men under his command. Now this episode shows him to be loyal to his cause; to a fault, perhaps, but loyal. He gives everything because he is, at heart, a soldier. Phaeton's excellent speech, recontextualized when juxtaposed with Shiva's unmarked grave, is a touching tribute. 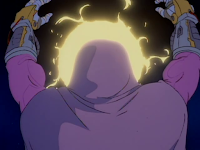 Let's go to Phaeton. He's suitably megalomaniacal in this episode, sending his "best general" on an almost suicide-mission to buy himself more time. "To complete his work here on Earth," he ominously muses. But when it comes time to send off the troops, he's managed to dredge up his inspirational persona for a moment. "The blow you are about to strike will send the Terran rabble back to the cover of their Pirate hideouts. You will have your revenge for the Terrans' destruction of Mars. I will build a monument to your victory and inscribe your names in stone so that future broods will remember your courage!" 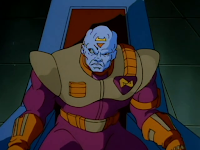 The one Neo who doesn't seem impressed by that speech, by the way, is Thrax. He's got command of a monitor, and gets tasked with following the Exo-Fleet on their diversionary run towards Earth. Once again, he survives. 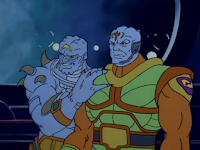 Wotad, the Neo Lord assigned to Shiva, disagrees with Shiva's decision to ignore the Exo-Fleet and continue with the mission. He's pretty annoying, all told, declaring victory prematurely and questioning Shiva's commands. I don't think this is an accident, I think he's supposed to represent the bad side of the Neo Sapien Order. It's certainly satisfying to see him blown to bits. 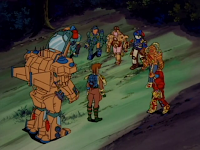 Let's shift focus to the Exo-Fleet side of things. As mentioned, the Exo-Scouts make their final appearance (unless there's a cameo I'm forgetting) this episode. It's a nice coda for their storyline, and accomplished something important for the story; it sets up what the Exo-Fleet is fighting to protect. Venus isn't just tremendously important strategically, it's inhabited by real people. (All of the Venutian natives we knew are dead or imprisoned.) Their reintroduction is a tad awkward, but I love the moment that Torres gets serious and steps out of her frame to confront them. They all take a few steps back, propelled by her force of personality, a great moment. Finally, letting them find Shiva and get effected by his death is also an easy way to jerk at the tears of the audience. (And it works.) 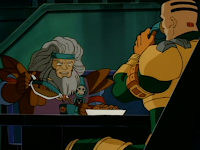 I love Marsh and Simbacca, chillin' over a cup of coffee. "In this war, I have trusted men with my life. You, I would trust with my money." Oh, Simbacca, you old charmer. You're definitely the Josef Stalin of this story. 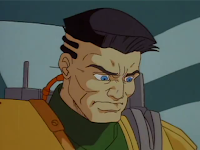 After Marsh gets command of the counter-attack, he concocts the best plan he can, trying to lure the Neo fleet with the inactive Resolute II and hitting them from the flanks. I love the doubt on his face as the casualties on his side rack up higher and higher. He trusts his plan, but clearly it takes willpower for him to stay the course. 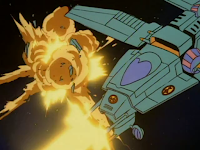 And losses the Exo-Fleet took. We see tons of their smaller space ships fall to the Neo guns, and plenty of E-Frames destroyed as well. Basically, any e-frame not in Able Squad pretty much gets toasted. We haven't seen Exo-Fleet losses like this since the Battle for Venus. Overall, this is a parallel to the Battle of the Bulge, when the dying Nazi empire made a push for Antwerp and caught the Allies flat-footed. This is a much condensed version, but essentially the German forces did extremely well due to luck and audacity, but were stopped short of their goal while suffering devastating losses. 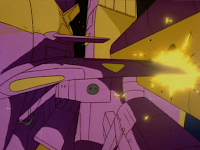 The battle itself is exciting, satisfying, and easy to follow. Shiva has called the Exo-Fleet's bluff and seems to be holding all the cards. He refuses to break formation, inflicting heavy losses on the smaller fleet defending Venus. Though most of the Exo-Frigates attacking his flank are destroyed, the survivors get close enough to launch a fusion torpedo attack that forces him to break formation to evade. During this window, Marsh uses the small fighters kept in reserve to get in among the Neo ships and tear them to ribbons. Even then, Shiva doesn't go down easily, trying for a last-ditch assault on the Resolute II by E-Frame after his ships are lost. It's tense and exciting till the end.

Shiva is shot down short of his goal and crashes on Venus. He survives, barely, but ultimately knows that "it is finished." (Not coincidentally, Jesus' last words too.) He's not just talking about his own life, but the viability of the empire he served. This was the last gamble, and the Neos lost. I love the parallel imagery of the partially obscured sun, used earlier by Phaeton, now again for Shiva's death.

What Doesn't: The Neo Fleet. As recently as Night of the Traitor it seemed pretty strong, and nothing has happened to it since then to weaken it. Now, can you hand-wave it and say that the losses inflicted when Mars blew up as well as their defeat at Venus left them on the back foot? I suppose so, but it would have been really nice to SEE the Neos Mars fleet get destroyed. At the very least, it could have been mentioned in dialogue. 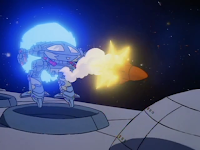 Not awful, but it seems like they missed a trick by not allowing Shiva to blow up the Resolute II. It never does anything more in the series after this, and Shiva's dramatic "the die is cast" as he launches his rocket turns into a piddling little 'bang' when it hits nothing very vital looking. The Neo fleet would still be destroyed and the Exo-Fleet still largely intact, so the story would progress. Not strictly speaking a bad, but definitely an opportunity wasted. 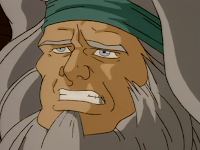 Simbacca, the pragmatist, seems awfully upset at the prospect of losing Venus. Remember, this is the man who was fatalistically resigned to dying when Enceladus ("REMEMBER ENCELADUS!") fell, who stubbornly attacked an E-Frame with a piece of concrete attached to a pipe. I just don't see him having that much empathy. He'd live to fight another day or he wouldn't, but either way he'd have more dignity about it. Another victim of the second act cliffhanger effect.

A small thing. The Exo-Scouts start chucking rocks at Shiva when he's still alive. "Why," he asks, though if he's asking them or God is unclear. The cairn imagery is great, but it's unclear why they started when they did. 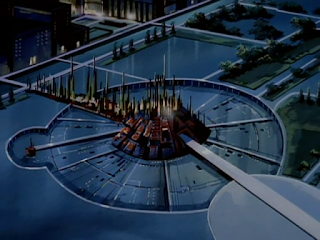 Watch for: Phaeton's Bunker is nearly completed. Work is still being done but the superstructure looks largely in place. It, needless to say, will be increasingly important to the plot as we approach the end.

The road to Earth is indeed open. This will inform every episode that comes after. Winfield now has clear skies everywhere in the solar system except Earth. You can bet he'll press that advantage. 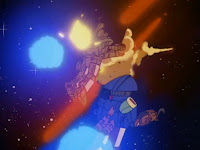 There's a minor animation flub where two of the E-Frames that get destroyed in the battle are... Exo-Scout e-frames. Guess those models were lying around.

Speaking of flubs, there's also one  where Algernon is in his original clothes on one side of a monitor and his new outfit on the other. Whoops!

Finally, Shiva's grave will make another appearance, albeit with a name inscribed which rather undercuts the irony of the episode.

Bio: Neo Warriors. This is the first (of two, I believe) bio narrated not by Winfield but by Phaeton. It's the only Bio not about a character. And it's the only full-body shot of a Neo Beetle we'll get to see. Though it would have been nice to do one connected to the episode. this is probably my favorite of all the Bios.

Overall: This is one of my all-time favorite episodes of the show, and probably my favorite of the stand-alone offerings. Once again, the positives are numerous and substantial, the negatives minor nits. Even the biggest problem, the sorry state of the Neo fleet, is more a problem with the episodes that have gone before than with this one. This is my go-to episode when I just feel like watching some Exo-Squad and don't feel like thinking about it too much. Great dialogue, great plot, great characterization, high stakes, realistic strategy... this one really does have it all.
Posted by Jimtron at 9:29 PM

Continued from my comment about episode Miracle. Did Samantha Stephens magically get rid of about 14 to 34 Neosapien Earth Fleet Ships before Phaeton gave Shiva the remaining 6 Neosapien Earth ships that were thrusting in orbit of Earth because I had a vision of her today standing in the control room of the Pirate Clans’ Flagship?

In “The Price of Courage” when Neo Lord Wotad says to Gen. Shiva aboard that episode’s Neosapien Flagship, “We’ve lost propulsion and weapons; all systems are collapsing.” , how did that Flagship regain propulsion seconds and/or minute(s) later when it was retreating? Did that old witch, that was in that Hansel and Gretel storybook (from Bewitched) use magic to repair that propulsion system? Tabitha teleported herself into that storybook, but couldn’t teleport herself out of that storybook because that old witch’s magic kept Tabitha locked up until Samantha Stephens got Tabitha freed.