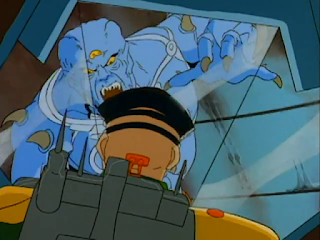 "You have been chosen to take part in the ultimate test: single combat with a Neo Sapien Warrior."

Trial by Combat is the forty-second episode of Exo-Squad. It opens with Yuri Stavrogin leading an attack on a Neo facility in the Antarctic. It's a trap, though, and the entire force is wiped out, with Stavrogin the only survivor. He's assigned to Able Squad to help locate the real Neo facility. The squad arrives during a blizzard, and uses it to lay down a sensor grid to try to spot incoming traffic. Marsh gets captured during this phase of the mission, and Galba informs him to hide his identity. As Takagi, he's put into combat with the ultimate expression of the Neo Warrior project, a Neo Lord. Despite having a fully armed (though not flight-capable) frame, the Neo manages to win. DeLeon, whose is flying an e-frame with an upgraded computer system, senses the "death" of Marsh's frame as the episode ends. 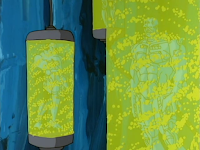 What Works: This is a fun, light episode that nevertheless manages to introduce several important new concepts that will play out in the endgame of the series. Chief among them are the Neo Lords. Having animal Neos running around never made too much sense to me. Even in the Australia arc, where they were ridiculously overpowered, having troops with no intelligence seemed like an oversight. With the introduction of the Neo Lords, it all makes sense. These specifically have "normal Neo Sapien intelligence." Their bipedal configuration make them able to make use of existing Neo material (though that might be tricky, my rough guess places them at about 12 feet tall. They've got an impressive array of abilities; cameleon-like hiding, acid spitting, an armored hide, even flight. (Not demonstrated this episode, though their wings are visible.) At last we have a Neo soldier who is a match for an e-frame without any gear. Moreover, after having ten episodes to get used to the idea of Neo Warriors, with broods gradually increasing in sophistication, I find that it's a totally believable. In fact, it retroactively justifies the whole premise for me. The Neo animals were the necessary steps leading up to this.

Still on the Neo Lords, I think the reveal was quite nice. Borrowing a page from the Robocop playbook, we're first told about them, then see them obscured, before finally getting a big reveal. It helps the mind accept this new element. 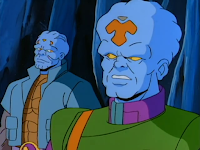 It's nice to see Galba again so soon, and the return of Praetorius is also welcome. It's telling that the last Neo Mega is assigned to this project. It tells us that it's considered the Neo's best hope. (Though, see below) 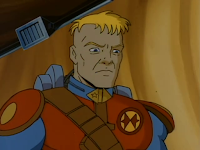 Stavrogin, last (and first) seen in The First Step, is also a nice return. I like the idea that he's advanced to squad leader. It's been another year of war, and there have certainly been losses among the veterans and recruiting among the civilians of Venus. I imagine everyone's climbing the ranks to an extent. I also like the effect losing his squad has on him. The more serious version of the character feels like an evolution rather than a departure. 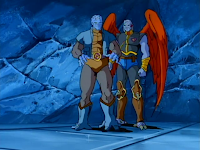 The Neo Hawks play an interesting role here. They're serving as Praetorius' primary back-up, a role that had previously been filled by Neo Megas and will subsequently be filled by Neo Lords. After this episode I don't think we'll see much (any?) of them, which is a shame. They seem to be basically normal Neo Sapien soldiers with wings and talons, which is pretty cool. 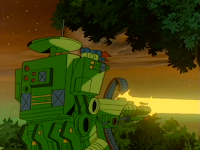 The other new element introduced here is DeLeon's upgraded e-frame. Note that it too was introduced via... trial by combat. Another apt title. The Frame's new system "merge their perception with that of the pilot." In Algernon's words, "it IS [DeLeon's]] mind." This gives him a kind of e-frame to e-frame telepathy, allowing him to sense J.T.'s battle and locate Marsala's frame even when cloaked. It also increases his combat efficacy. It's an interesting element, and ties into the S1 finale a bit. Perhaps the spookiest bit is DeLeon waking up in the middle of the night when the frame "calls" him. 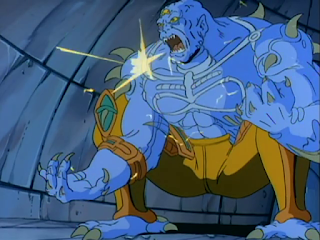 The actual battle between it and Marsh is terrific, which is pretty important given that it took up a third of the episode. One genuinely fears for Marsh's safety, and the beast's amazing arrays of abilities quickly contribute to a sense of despair. And yet, unlike the Neo Warriors in Australia, one gets the sense that these things are powerful but NOT invulnerable. Marsh injures him, badly, which paradoxically makes him more menacing than the 'shoot them and watch them get back up' Neo Warriors in their first appearance.

What Doesn't: This is the first major mission that J.T.'s been given since Mars. Even though he's a commander, Winfield only gave him Able Squad plus one. Maybe losing the entirety of Baker squad failed to inspire confidence. (Come to think of it, this may not be a negative at all. 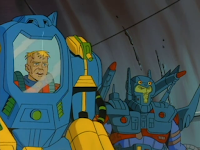 Hey, see Yuir standing next to Butler? Yeah, that's not Butler. It shares the same exact character model with him, but he has a different voice actor. Oh, and, of course, he dies. I think there was a screw-up somewhere.

I'm not sure I buy Galba helping Marsh for the sake of helping Marsh. He wasn't a traitor because he hated the Neo Sapien cause, but he thought peace between the Terrans and the Neos should be the goal. It's difficult to see how not sending Marsh to Phaeton accomplishes that goal. 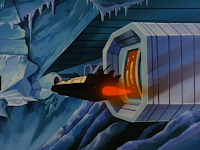 Watch For: Phaeton's limo is back! Galba gets the tour in it. A nice touch.

Need I mention that Neo Lords and DeLeon's enhanced frame will continue to play important roles in the series? 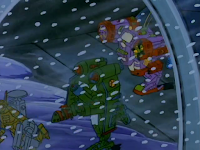 Oh, and one of Stavrogin's squad is piloting a Marsh-style Frame. I only point it out because we almost never see that in the series. Probably the marketing folks wanting Marsh to be special. But it's nice to see.

Bio: J.T. Marsh, again. I suppose he's the main character in the episode, more or less.

Overall: Strong episode. A third was given over to a single fight, but in a way that just helps sell the Neo Lord concept. The character moments along the way, especially from the guest cast, help the episode feel like more than just a big fight. Looking forward to seeing this plotline conclude next week.

Great spot for the 'other' Marsh e-frame belonging to Fox Squad! The appearance is so brief, I missed it completely. I've always got an affinity for Terran e-frames from the other exosquads in alternative colour schemes.