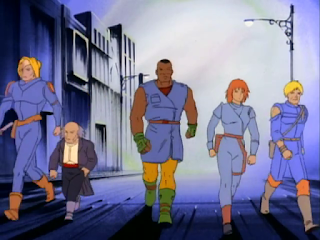 "He was a good pilot. It's a shame he did not go down before our guns. Now the Terrns who dwell here will finish him off."

Winged Fury is the fortieth episode of Exo-Squad, taking place in the post-Mars reality of the show. All eyes turn to Earth, as they will for the majority of the remaining episodes. Marsh and Marsala are tasked with bringing Sergeant Feldson to the resistance in Maine, so he can repair captured Neo e-frames. A spy in the resistance turns this milk run into a deadly encounter with Thrax and his squad, who chase Marsh to the ruins of New York and nab his fusion pack after he crashes. Marsh makes friends with Sidney, an old Jewish cabbie, and outfoxes some Neo Cats and a Neo Hawk sent in to hunt him down once Phaeton realizes Marsh is within his sphere of influence. Meanwhile, Marsala and Feldson are captured at the rendezvous thanks to the traitor, Turner. A Neo Mega seems to be playing some kind of angle, as he injects Marsala with something moments before Livia arrives to interrogate the traitor, claiming that he died. 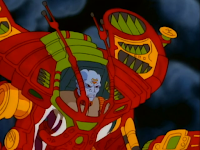 What Works: It's great to see Thrax again, and with a pretty cool new e-frame to boot. It probably makes more sense for him to have a general-purpose e-frame rather than his Y-Wing space fighter. Oddly, the while the Thrax toy only comes with the Y-Wing, there is a close approximation to this e-frame that came with Marsala, the sub-sonic scout e-frame. He's very much in character this episode, doing his job but not relishing the defeat of Marsh.

Speaking of, I like that Marsh gets defeated. It's good to have the hero invulnerability get tarnished. He flew into an ambush and got splashed--it happens. Especially if he was set up. I like the theme of the disloyal resistance member popping up again one last time as well. 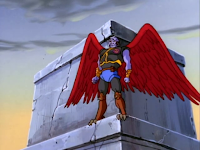 This is probably my favorite Neo Warrior episode to date. These guys seem impressive but still mortal. Marsh shoots two of the cats down and gets the rest with superior strategy. (A terrific scene, btw, but one that doesn't lend itself to getting captured by a single still image, or even a sequence.) Kor, the Neo Hawk, is a tougher nut to crack, but ultimately goes down to a well-placed grenade. (But, see below.) I like that the trend of these guys improving continues. They're third brood, and able to communicate and use tools. (But, see below.) 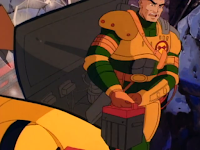 I rather like Sidney's car, and especially its fusion battery. It looks exactly like it's supposed to, a cross between a fusion pack and a regular car battery. 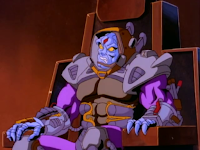 Phaeton's brief appearance is well executed. He seems completely disinterested... until Marsh's name is mentioned. Then he freaks out. A tad cartoony, but basically great. 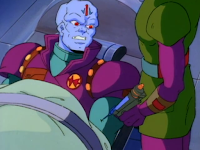 Finally, I'm intrigued by what's going on with Marsala. While there's no real apprehension on my part that he's dead, I do want to know what this Neo Mega is up to.

What Doesn't: While I see what they're going for with New York... I don't think it quite works. Perhaps it's just my bias, but I have a real Escape from New York vibe from this episode, and it does nothing the original didn't do better. I get what they're going for, showcasing a city where there is no resistance, just scavengers trying to get buy. It just doesn't quite gel. 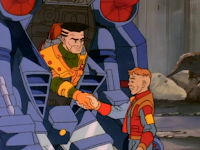 Sidney, especially, is painted a little too broadly for my taste. With his constant use of Yiddish and his seemingly endless stock of New York cliches, I didn't engage with the character nor care much about his eventual fate. 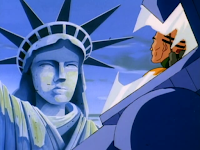 Marsh blowing up the Statue of Liberty seemed like an unnecessary beat to me. It feels like it's been done before, and Kor didn't seem like a villain worthy of a monument. 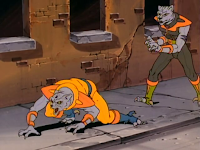 The Neo Cats, who I basically liked, seemed incapable of producing human speech but did understand it. I can just about buy that. Kor, on the other hand, understood and spoke English. Where this starts to fall down is that Kor communicated to the Neo Cats in a squawking language, even though he spoke English. The cats then communicated in hisses and growls. First off, why wouldn't Kor just speak to them. Secondly, it's a little difficult for me to believe that the cats have come up with their own language in the, what, month or so they've been alive? Also, oddly, the Neo Cats are the only one of the Neo Warriors to get a toy. They're cool and all, but the Neo Lizards seem like the obvious choice if you're only going to do one, and Kor would have been high on that list too. 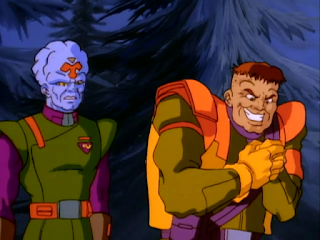 Watch For: Galba, the as-yet unnamed Neo Mega, will be a major character going forward. Turner will make another appearance as well.

Come to think of it, so will Sidney, in a brief cameo in the penultimate episode of the series. 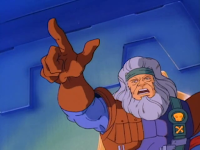 Bio: Jonas Simbacca, again, though with some new animation. On the other hand, the bit about "maybe we'll join with the Neos against an even greater foe" has way more significance now.

Overall: Not great. There are some elements I very much enjoyed, but they're mostly background / b-plot / worldbuilding. The next one, on the other hand, which picks up the b-plot and runs with it, is much stronger, so don't go anywhere, ya hear?
Posted by Jimtron at 9:24 AM

Turner's expression in the screenshot is PRICELESS.