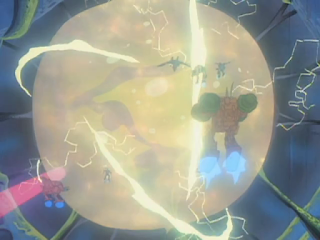 "Venus fell to the Exo-Fleet and now Mars is destroyed. Where once we had an empire, now it has turned to dust. I will never surrender, even if it means destroying every living thing on this planet!"

Heart of Mars is the thirty-ninth episode of Exo-Squad, and the conclusion to the four-part Return to Mars plotline. Things pick up immediately where we left off, with e-frames all over the planet shut down. Captain Butler presses his momentary advantage to drive off the Neos, who leave their frames behind. He wants to pursue but Marsh pulls rank; Algernon thinks that the artifact must take priority. They reenter it, intending to find its heart. Find it they do, as do the Neo Sapiens, and a firefight deep inside Mars results. When a fusion pack explodes inside pulsing energy heart, it triggers a chain reaction that ultimately destroys Mars itself. Able Squad gets away, but Typhonus is thwarted on the threshold of his shuttle by the Exo-Scouts, who fly it to safety. This affords Torres the opportunity to crash her own funeral. 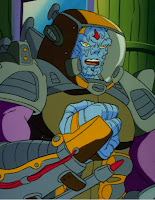 What Works: Well. It's certainly a big episode. The destruction of Mars radically tilts the balance of power in the solar system. The Neos just lost their main industrial base and population center. Unlike the Liberation of Venus, which was obviously coming, this was a surprise. On that level alone, it's an exciting offering. Phaeton (who looks awful) clearly grasps the implication. His threat, that he'd rather see all life on Earth wiped out than surrender, is incredibly ominous in this context. Add in that he has a degenerative and inevitably fatal disease and the stage for the final showdown is starting to be set. 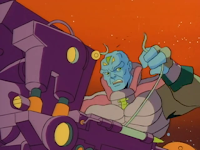 I rather like the scene at the start of the episode where the war has ground to a halt due to equipment failure. The e-frame jockeys on both sides look suitably frustrated. I also like the infantry taking advantage to cause the Neos some serious pain. (But, see below.)

I love the glimpses we get of young Rita Torres from her flight recorder at her funeral. It's a rather nice ritual they have, too, to review the final thoughts of a fallen comrade. I imagine in real life this would often be mostly a recap of battle and occasionally be embarrassing for all, but still, a nice conceit. (But, see below.) 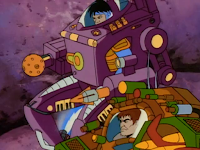 I really like Kaz and Nara commandeering Neo gear. Takagi bragging that he's grabbed Typhonus' frame feels very in-character, and sets up the great conflict of Typhonus using his "remote cyberjack" to set Takagi for a collision course with the Heart. Of course, it probably would have made more sense for him to grab the Y-Wing, since he's used to that sort of craft, and Burns to grab the small frame, since that was her secondary specialty for the longest time, but then we wouldn't have gotten Maggie rescuing Kaz, which fits better with their history. 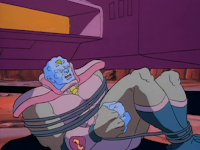 Typhonus is great in this episode. I was wrong back in my review of Pirate's Ransom about Marsh and Typhonus not squaring off again, they do this go. I think I'd forgotten because there's no sense of emotional payoff here from the earlier conflict. Considering that this Typhonus may well not remember it, I suppose that tracks. In any event, he takes a pounding and just keeps going. Nara shoots him right in the freaking face and he barely slows. The exploding compound gets all of his men, Ixion last (bye, Ixion, I rather liked you), but not him. What finally trips him up? (Literally!) None other than the Exo-Scouts. It's a kind of fun moment. 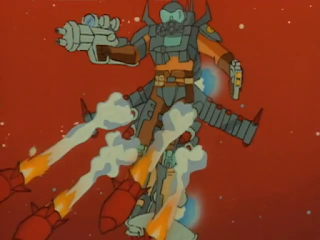 What Doesn't: I don't quite buy the Jump Trooper's gear working. I mean, yes, in theory, I think that scene made sense. In execution, though, they're still using HUDs, cyberlinks, jetpacks... in other words, electronics. Maybe if they'd shed their power armor for the charge, I'd have an easier time buying it.

As much as I liked the funeral, the device of having Rita's shuttle maybe not make it out was clumsy. I wish we'd spent as much time on James' death, because he's really honest-to-god dead.

Watch For: Believe it or not, we haven't seen the last of the Mars aliens. I know, crazy, right? We'll do a tiny bit more in the Martian Asteroid Belt as well. 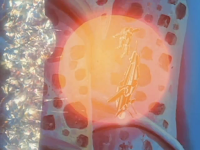 It's official. Cosari's squad is no more. He and his last pilot, who is consistently in an Exo-Fighter this episode, get hit by one of the Heart's immuno-response bubbles and vaporized. Cosari even gets a (single, solitary) line this episode. Sadly, we never learn the name of his seventh trooper. Of course, he's already lost an Exo-Fighter, but I won't be too petty. It must have been hard to keep track of six extra e-frames by storyboard artists working across four episodes.

Phaeton's threat to eliminate all life on Earth is not an idle one. 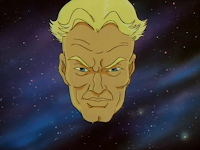 Bio: It's Algernon! A character prominent in the episode, featuring some new animation, and we haven't seen it before. I have no complaints about this bio. I mean, it's goofy as hell, but whatever.

Overall: A good conclusion to an ambitious storyline. I still think the Exo-Scouts could have been pulled out and made its own thing, rather than a subplot here. All in all, though, this is a very neat way to introduce the threat for the (sadly only hypothetical) season 3, while enabling the Neo Sapien War plot to reasonably get concluded in the 13 episodes we have left. An invasion of Mars would never have been feasible, the Exo-Fleet would have had to seize utter control of the spaceways and just bomb them into submission. Not impossible, but hardly heroic. Now, though, the final showdown can take place on Earth, where it emotionally should.

Noticed that the resurrected Exofighter from Baker Squad changed colour from orange to teal (Takagi's colour)?

Also, while Able Squad gathered together for a memorial for Rita Squad, there was nothing similar done for Baker who were 100% wiped out! (A lack of screen time may be an explanation?) I know they're a different exosquad, but they were under Marsh's command. While Marsh is constantly haunted by Noretti's death, she was only with Able Squad for the beginning of one episode. Baker Squad, 7 members strong, was with Marsh for what may have been several days but you don't see Marsh putting a group photo of them in his e-frame alongside Noretti and (spoilers here) another Able member who dies later.