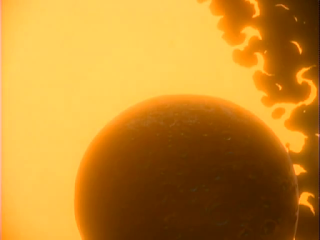 "Has it not occurred to you that we are all sacrificing ourselves for nothing? This has become Phaeton's war, not ours."


The First Step is the twenty-fourth episode of Exo-Squad. Able Squad has been tasked with providing air support during an operation to seize control of Mercury, and with Torres on Earth duty he's got a fill-in pilot, Yuri Stavrogin. J.T. and Yuri have history together, so when Kaz starts to fall under the newcomers influence Marsh bristles. On the Neo side, a thoughtful commander, Glycon, and his ace air commander, Thrax, attempt to defend. The Exo-Fleet prevails and Glycon dies. Thrax defeats Takagi in a dogfight but, realizing the battle is lost, spares his life.

What Works: Once again, everything about this episode works. Let's start on the emotional side. 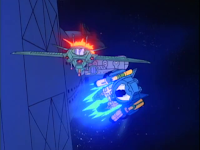 Kaz gravitates to Yuri. Yuri is the best pilot Kaz has met, better than J.T., and it clouds Kaz's judgement. I totally buy this. Mistaking skill as a pilot for competence as a role model is an easy mistake to make. It's fun to see them joyriding around Port Chaos (the city where Hollis fled to a couple of episodes back), then around the still-being-retrofitted Resolute II. The animation captures the fun very well and helps sell the rest of the plot.

Yuri and J.T. also play well together. Without ever saying so, the episode establishes that they had history together, they used to be friends, and that J.T. grew up while Yuri didn't. Yuri obviously has the ability to get under J.T.s skin, and doesn't hesitate to use it. 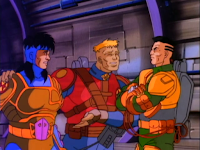 Marsh.and Takagi is another nice dynamic. J.T. is MUCH harder on Kaz than he is on Yuri, and this is obviously because he thinks Kaz can be better but he's written Yuri off. Again, none of this is said, and yet it's all apparent. Marsh grounding Takagi during the big fight also comes into play during the climactic battle. 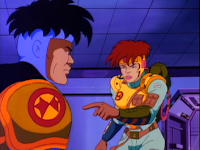 Finally, unexpectedly, there's a swan song for the Weston/Takagi relationship. She more-or-less writes him off as an immature git while at the same time encouraging him to be better AND going to bat for him, faking evidence to keep him from getting in trouble while Marsh is on the warpath. Kaz opening up to her about his father never being satisfied was a nice moment too. 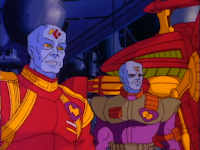 Meanwhile, on the Neo side, we're introduced to a new recurring character, Thrax. As a Neo ace in a red Y-Wing, he's an obvious Red Baron figure. Thrax is thoughtful, introspective, and as far as we can tell the best e-frame pilot in the series. Though he was introduced as a throw-away character, he turned out so well that he'd come back again and again, and would even have made it to the planned-for spin-off series that never materialized. 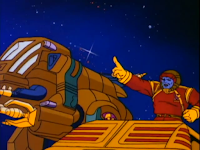 Just as memorable, at least in the context of this episode, is his commander, Glycon. Glycon laments what the war is turning into, but still does his duty to attempt to hold Mercury and dies in the process. Good for him for leading from the front, and tactically the decision was sound. The Jump Troopers had taken the main Neo facility on Venus, but from their fallback position Glycon leads his ground troops in a counterattack on the base and saves his remaining e-frames to attack the ships. It might have worked, too, had Takagi not been, effectively, held in reserve. 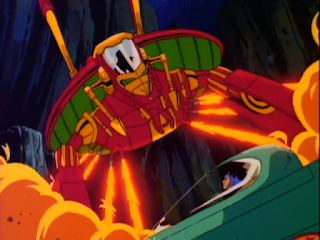 Thrax deciding not to kill Takagi, even after having beaten him, is definitely an emotional highlight of the episode. Having some unabashedly sympathetic figures who are still, nevertheless, loyal Neo Sapien soldiers, is a welcome development. It's also nice to see our heroes bested from time to time. No matter how big a fish you are, there's always someone bigger out there. 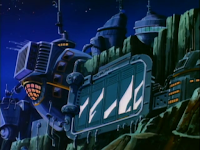 The visuals of the episode are strong. Both Neo Sapien bases are kind of cool and futuristic looking. We get a good look at one of the Exo Cruisers, the Wellington, with its large circular docking port. And Yuri's e-frame is pretty nifty looking. Once again, it seems bizarre that we never got a toy of this.

What Doesn't: Ummm... I'm gonna have to really reach here. Ummm... ok, here's one. Yuri tells tall tales about the Neo ace Thrax and his red e-frame. Now, I could just about buy that he'd know about the ace and his red mech, but how would he know his name? Maaaaaaybe Neo Sapien propaganda? 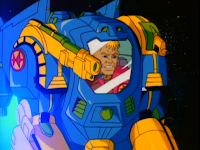 Watch For:  As Winfield says, this is the first step towards the liberation of Venus. We'll see more about this in the near future. Thrax will continue to play a role in the series, and we haven't seen the last of Yuri.