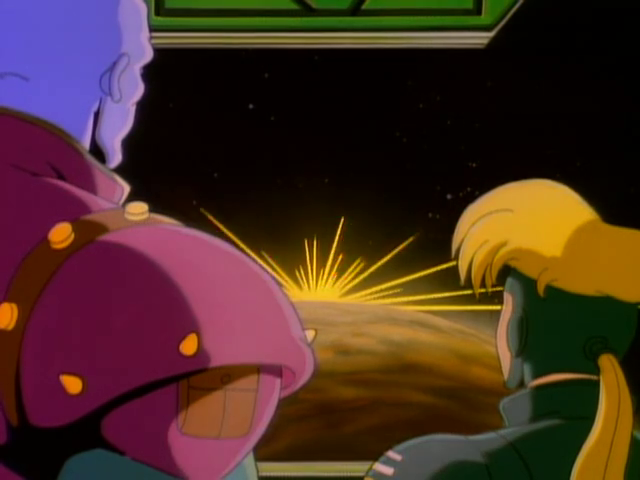 "When I joined the Exo-Fleet, this is what I wanted to see... the stars from space. But now I'd give anything to watch the sunrise on Venus."

Dragon's Rock is the twenty-first episode of Exo-Squad, and takes place directly following The Last Man and Mindset. The two wings of Able Squad meet up and have a simple mission, drop supplies to the resistance on Venus. Things go awry when Burns and Bronsky get captured to be part of Draconis' secret slave labor. He's building a fortress in case Phaeton tries to replace him with a Neo Mega. The captives manage to get out a signal and Able Squad rides to the rescue.

What Works: Easily the most interesting bit of the episode is the machinations of Draconis. He knows about the Neo Megas and he's terrified. Should he be? We'll find out. Capturing Terrans and keeping them off-the-books is a rather elegant solution to that issue though. (I love his second in command grumbling that "they eat too much," because remember Neo Sapiens have more efficient digestive systems than Homo Sapiens.) He's right to be cautious, we learn that General Drusis of Ceres was executed for (presumably) allowing the secret of the Neo Megas to get out. 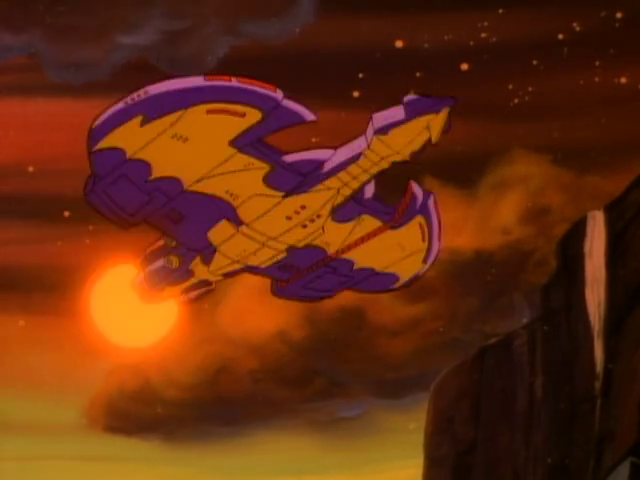 He's got a cool-ass shuttle, too! I've long been a fan of the ship designs in this universe, and this one is no exception. I rather like that he uses the standard Neo Sapien purple and yellow to achieve the effect. 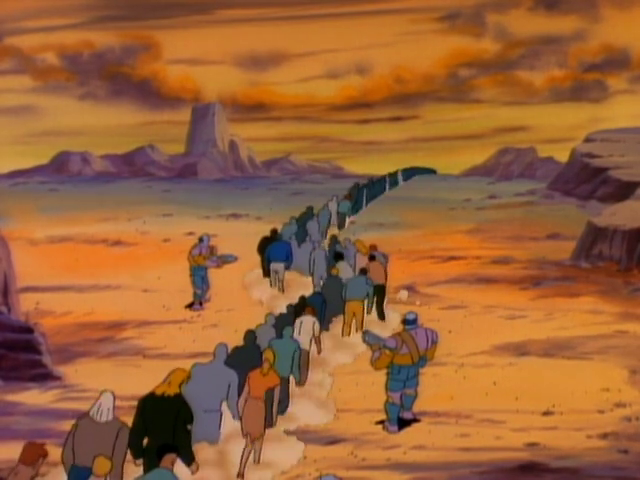 The Trail of Tears imagery is powerful, though logically I have a hard time imagining that Draconis would find all those folks to round up and move. It looks like it stretches from horizon to horizon. Perhaps he's just moving most of them from some other city, and Burns & Bronsky are just the stragglers? 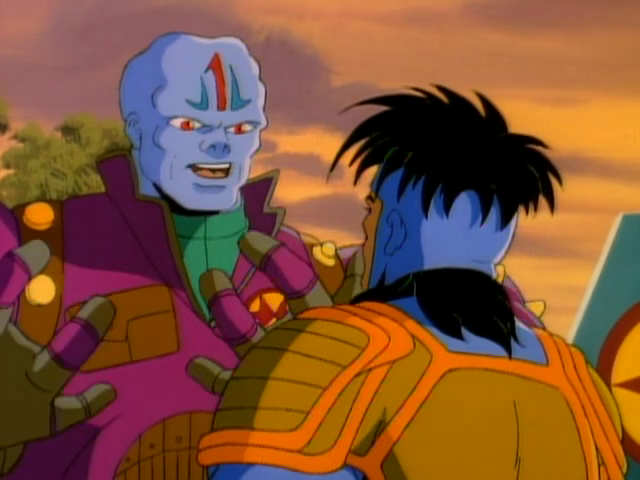 Nara's crush on Marsala gets a bit of exploration, though this is a Marsala-lite episode. Marsala snaps at Takagi when the latter takes issue with the way the former is coping with the loss of two teammates. Marsala's approach is cold and rational, but, though "I do not express my feelings the way you do, that does not mean I feel less." Well said. Nara also hallucinates Bronsky as Marsala when she collapses due to dehydration and sunstroke. And, of course, they share a moment bonding over the Venutian sunrise. 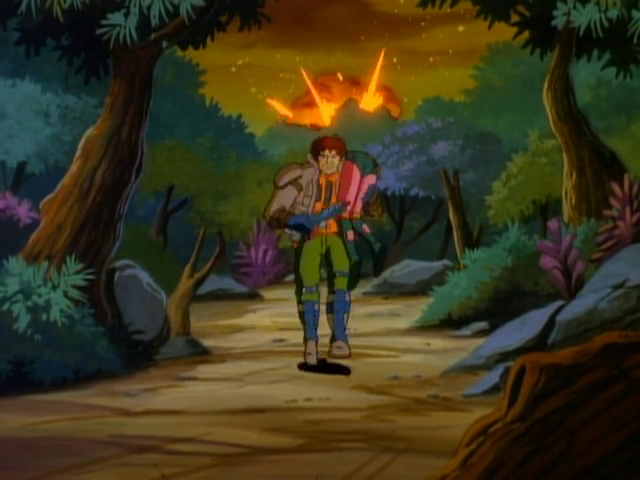 This is the the first episode where Bronsky is, more or less, front and center. For the most part, he works well. He's still lazy, and a slob, and the worst pilot in the squad. (Note that he crashes the cargo ship, not due to enemy action, but due to weather.) But he's got a big heart and a strong back and he throws both into the cause. 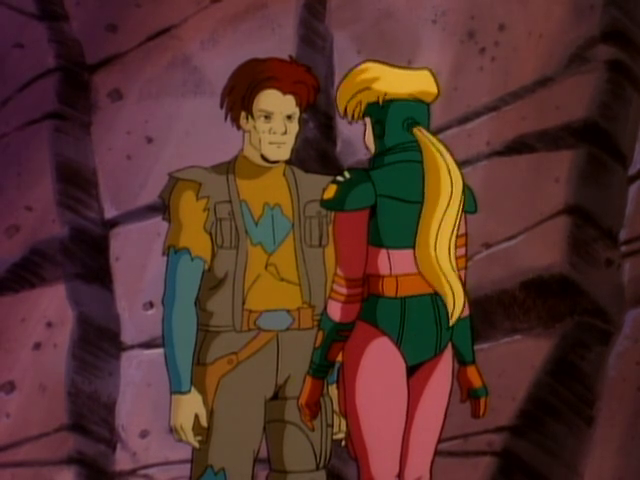 And, of course, we can't have a Venus episode with James Burns as well. He looks awful! Which is a little odd, considering the timing. (See below.) 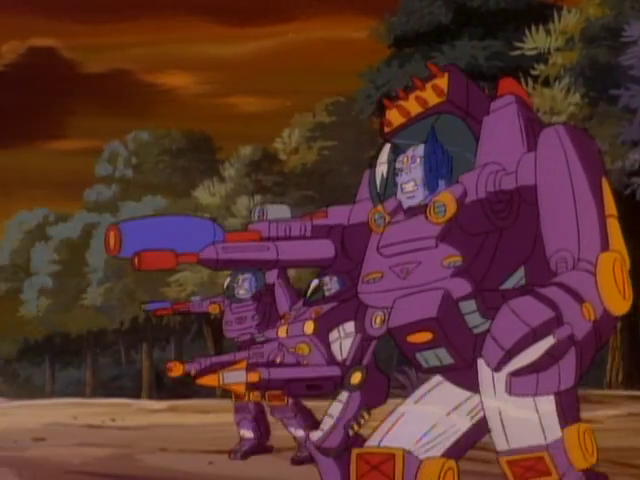 There are some nice example of tech in this episode. We finally see the Neo Sapien colored version of Hollis' frame. 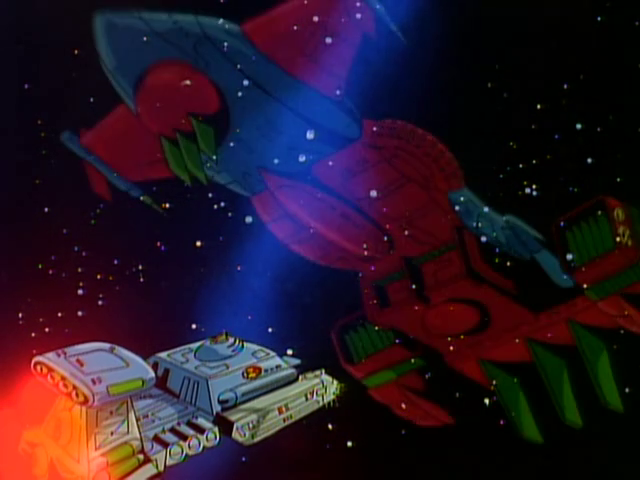 We get another nice shot of a Pirate vessel de-cloaking to take on e-frames right at the start of the episode.

There's a really nice effect when Nara uses her spotlight to explore the abandoned resistance camp. I also enjoy that Nara busts out her ground support e-frame again, for the second and (I believe) only time in the series.

Finally, the little aftermath pan where we see the devastation wrought by Able Squad on Draconis' secret loyalists was very well done. Usually it's the good guys we see licking their wounds. This will start to change. 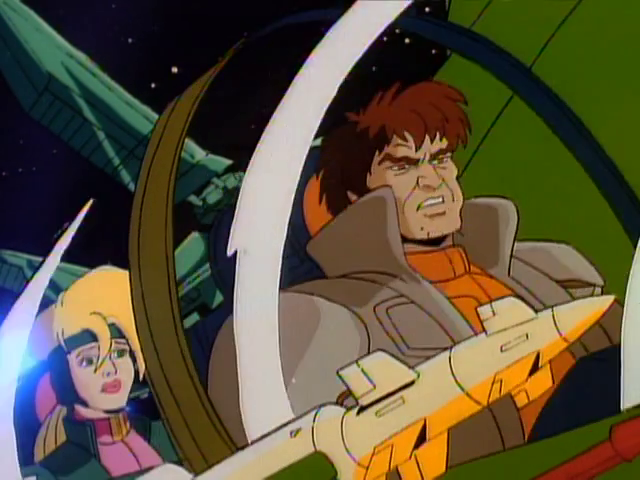 What Doesn't: The timing is a bit off. JT and Marsala drop off the Earth resistance while the rest of the gang (minus Nara, who was missing) engages the Neos on Ceres. Then they immediately link up (now with Nara coming over from the Arnhem.) Presumably James was dropped off simultaneously, but now they've got more supplies for Venus? That doesn't quite feel right. Also, James looks like he's been doing slave labor for a lot longer than a few days. Possibly, the Ceres mission was just a separate mission that took place weeks if not months later than Mind Set, but it's suspicious that JT and Marsala were on the same class of Pirate vessel that we saw them on in that episode. 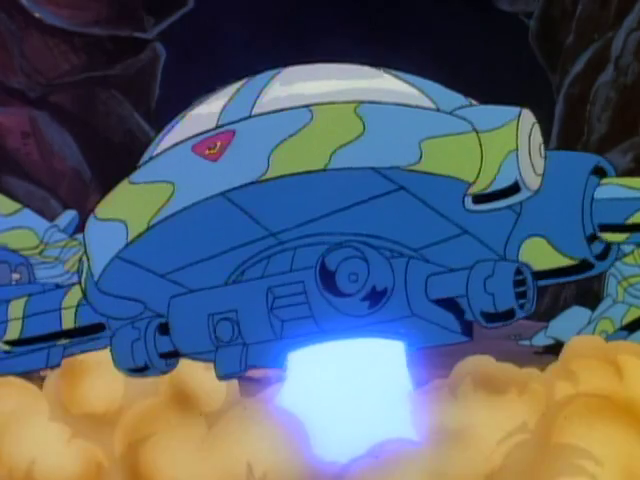 Bronsky shoots off the legs of a Neo Frame with a hand-held rifle, then commandeers it. It's a little goofy, and it's not in keeping with the relative firepower of hand weapons and eframes as has been established up until now, as recently as Mindset.

Watch For: Draconis' schemes and fears will continue to play a part in the story in a big way. We'll also get more payoff for the Venutian sunrise imagery.

Bio: Nara, again. Now it's really feeling like padding, though at least it's an appropriate character. Bronsky would have been a better choice, though of course there are 39 episodes this season and perhaps a dozen bios.

Overall: A good character-based story. The quibbles about the timing are just that, quibbles, and they wouldn't be an issue at all if not for the ambitious attempt to tie this episode to the last two more tightly than absolutely necessary. The plotting of Draconis feels like a story advancement, and the impact of having Neo Megas in the mix continues to drive the story. A solid entry to the overall story.
Posted by Jimtron at 6:50 PM