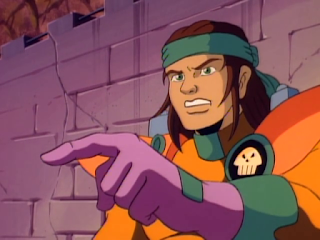 "Exo-Fleet spent a fortune teaching you how to fight. Learning how to walk away from a fight, well, that's something you have to pick up on your own."

Inner Dark is the twenty-second episode of Exo-Squad. The sabotage of a ship being constructed in orbit around Chaos reveals cracks in the Exo-Fleet/Pirate alliance. Encouraged by Barca, Hollis takes advantage of a weapons demonstration to attempt to assassinate Simbacca. Though Able Squad gives chase, Hollis flees to the Renegade Clans. Barca tries to use this to eliminate Able Squad, sending them into an ambush, but thanks in part to a change in heart on the part of Hollis, the squad is able to steal a massive ship from the Renegades. Professor Algernon saves Simbacca's life and the alliance is secure.

What works: Chaos was introduced at the end of the Pirate Alliance arc, and needed some exploration. For better or for worse, this episode is it. We won't see Chaos again until the final episode of the series. Much of that comes from visual cues. We can see that it's a world with at least three major surface cities. There seem to be underground cities as well, which makes sense on a world with minimal sunlight and probably little in the way of atmosphere. Let's look at some locations: 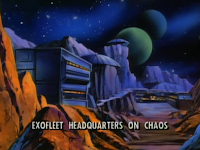 Exo-Fleet Headquarters.Looks like surface buildings, perhaps on one of those sprawls of lights we see in the opening establishing shot of the episode. We also see that Chaos has (at least) two moons.

The city that Hollis flees to looks fairly small, more like a town really. It's underground, connected by underground caverns to where the weapons test was done.

The bar where Marsh and Takagi search for Hollis looks pretty typical. Folks drinking (amino acids? Or are they still on hard liquor?), folks playing pool, folks flirting. What did stand out to me was the one-armed bartender. He seems particularly hostile to Exo-Troopers, even by Pirate standards. I wonder exactly how he lost that arm... 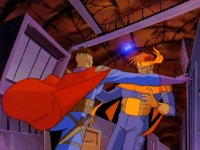 We've also got a good number of Pirate incidentals. I like the pair in a shoving match that gets interrupted by the chase. There's also a cute Pirate in pink holding a rifle who scatters during the chase, only to show up again a bit later in the bar. 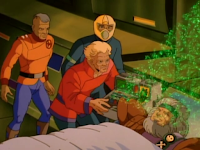 Moving on, I enjoy all of Algernon's appearances. This one is no different. (Though see below.) What works best is the casual hubris he exhibits when trying to cure Simbacca. "And if [your theory] isn't correct?" "That never occurred to me."

What doesn't: Unfortunately, more about this episode doesn't work than does.  Kicking things off, let's go back to that weapon's test. Each member of Able Squad has had their mech equipped with a unique upgrade. None of these will ever be used outside of the squad. Also, it can't have been THAT long since the fleet got to Chaos, so Algernon did all this in, at most, 3 months. That's a lot of time for 7 different technological upgrades. It all feels more cartoony than we're used to. For the sake of completion, here are the upgrades. 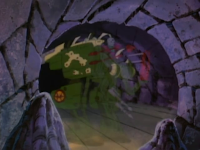 Marsala and Nara get their mech equipped with a pirate cloaking system. This upgrade gets used quite a bit in the series, as it's got good dramatic potential both in and out of battle. 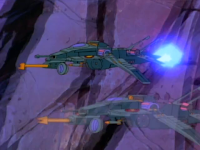 Kaz gets himself a holographic decoy. Unclear if it shows up on radar of if it's purely visual. This one gets used only occasionally, if memory serves. 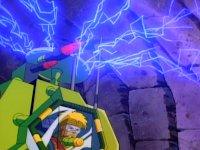 Alex's frame gets a sophisticated electronic jamming system. Unlike the others, Alex will eventually get ANOTHER upgrade to his frame, one that plays a bigger role in the plot. 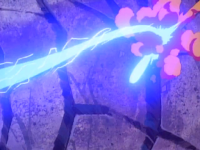 Weston gets an arcing electrical weapon called Chain Lightning. This is another one that's basically only useful in combat, so it only gets a little play in the series. 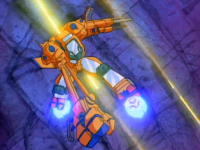 Torres gets herself an anime-style battering ram fist. Defintiely the goofiest of all the upgrades, though I suppose it's in keeping with her really awesome laser sword.

Bronsky gets himself some cluster bombs. This one feels the least like an upgrade. If he'd just shot this thing off, I wouldn't have felt like I needed an explanation. 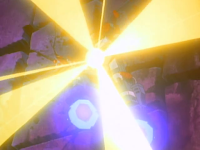 Saving the best for last, J.T. gets himself a weapon called Solar Flare, some kind of plasma shooting out in all directions with him untouched at the epicenter. This one gets used a lot, and is definitely cool.

Hollis flat-out attempted an assassination, and yet Simbacca gives him a pass at Marsh's insistence. That's not just out of character for him, it's downright silly. Perhaps if they'd exiled him to the Exo Fleet instead... but no, Simbacca should have probably struck him down where he stood. The lack of consequences doesn't work for me at all. 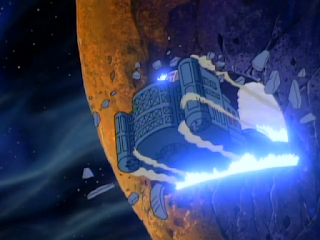 The Resolute II is introduced this episode, and I'm sorry to say that doesn't really work for me either. WHY were the Renegade Clans building what is clearly an Exo-Carrier, when Pirates don't have e-frames. Why is it in Exo-Fleet and not Pirate colors? For that matter, why are they building a ship at all? It seems clear that this is an underground political group, not a group that's likely to wage a space battle with Simbacca for control of the Clans. Much like the special powers introduced above, this feels like a marketing-driven decision. 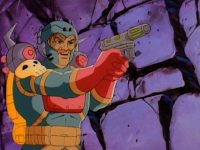 Speaking of, the Renegade Clans could have been cool, at least in theory, but in practice their aims are unclear. The fact that we never see them again also undercuts their effectiveness as antagonists. It seems like there would be enough animosity towards the fleet that you don't need a separate faction for this episode to work. Again, it's probably the necessity of introducing the Resolute II that forced their inclusion. 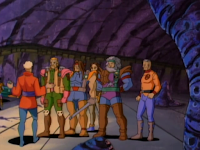 Watch for: Remember that ginormous Pirate that ambushed Marsh and DeLeon back in The Embassy? He shows up with the group getting a tour, though he doesn't seem quite so large this time.

Overall: Definitely one of the weakest episodes to date. Dramatically, we needed to see Chaos to make it believable, but it doesn't seem like the producers had a clear vision for what life is like here. (Contrast to Mars, or Venus, or Tethys, and the mediocre world building becomes readily apparent.) Couple this with the toy-driven need to introduce a new good-guy ship and tech, and you've got an episode that suffers.

Was Barca a double agent secretly working for Simbacca and/or Admiral Winfield because in “Inner Dark”, Barca apparently does’t get investigated in any future episode after in “Inner Dark” , Barca had practically told Hollis to capture or kill Simbacca (neither of those actions were fully done) , and in “Inner Dark” , Barca told Able Squad members that he had to send Hollis away because he (Barca) and him (Hollis) “are friends”; Torres asked Barca about his oath of loyalty to Simbacca, and Barca replies, “It’s not easy to be an honorable man.”. Also, in “The Gathering” , Barca secretly tells Phaeton about that “Marsh and DeLeon will meet with Simbacca as soon as we reach Tethys; their mission is to secure an alliance against you.” , as if he (Barca) is hoping Phaeton will arrive to persuade Simbacca with a treaty so that perhaps Phaeton will be captured or killed.