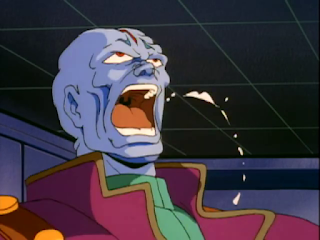 "We just want the chance to take back what belongs to us. Our homes, our planet."

The Greatest Fear is the twenty-fifth episode of Exo-Squad. Able Squad is dispatched to Venus to begin a complete recon of the planet, in preparation for a full-scale invasion. Things go awry when, while surveiling a top-secret Neo research facility (so top secret even General Draconis isn't allowed to know what's happening inside, much to his chagrin), Marsala gets captured. Marsh makes the tough call to destroy the base with Marsala inside to prevent the liberation effort from being discovered, but Nara takes it on herself to rescue her partner. She succeeds, and they flee the smashed base with a canister of a deadly bioagent and what they think is a Neo Mega but what is in fact a Neo Sapien suffering from Auto Mutation Syndrome injected with a failed curative. 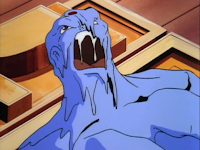 What works: The imagery of the mutating Neo Sapien is pretty horrific. One can imagine why Marsala (and, indeed, all Neo Sapiens) fear this particularly gruesome fate. 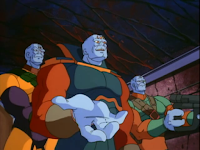 Draconis continues to delight. He absolutely hates getting pushed around by the Neo Megas, and goes to great lengths to find out what's going on in their secret lair. He uses the capture of Marsala as an excuse to pay a visit, and then threatens Lysander (the Neo Mega) with an 'accident' if they don't disclose what they're working on. 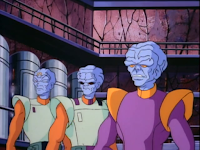 The Neo Megas continue to play an important role in the story. I rather like how the Neo Mega mooks each have their own designs. The guy with the dark eyes is pretty creepy.

This is a decent way to introduce Auto Mutation Syndrome into the lore of the show. Despite the Neo Megas strongly implying that they're looking for a cure for the illness, Draconis' mind automatically leaps to its use as a weapon. It's a nice bit of misdirection, and perfectly in character with the ambitious and thuggish commanding General of Venus.

The Venutian resistance is looking pretty beat up. It makes sense, most of them were used as slave labor not that long ago. The episode is good enough to acknowledge that with a quick visit to the now-abandoned Dragon's Rock construction site. 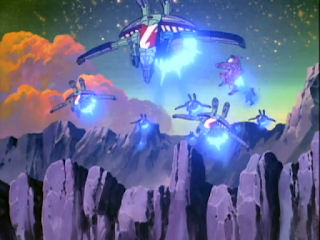 The fight in the beginning of the episode (following another one of those classic pirate decloak / launch frames / recloak sequences) is satisfactory, mostly notable for Takagi making a point of obeying an order to let a Neo withdraw that he almost certainly wanted to ignore, a nice bit of continuity from last episode. The fight at the research facility at Mount Artemis (continuing the tradition of lovely place names on Venus), on the other hand, quickly goes from bad to worse. It's nice to remember that the Neos have the run of the planet.

There are several nice touches. Bronsky feels guilty for his role in the battle, getting pinned at the base of the cliff. DeLeon, Mr. cold-as-ice, is the one who points out that Marsala needs to be silenced. Marsh assumes the burden himself, because of course he would. James only has time to rescue one trooper, Nara or Marsala, and OF COURSE he chooses Nara. Takagi calls him on it, but really, how could he not. 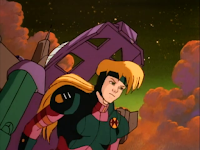 What doesn't: For some reason, Nara chooses to exit her tiny, ground-support e-frame before storming the base. While I can just about accept that, due to the distraction of J.T. blowing up the whole place, she succeeded, why would she choose to do so on foot? Her e-frame can fit anywhere a person can, that's the point of it. (BTW, looks like I was wrong about the mech's appearance in Dragon's Rock being the last time this mech shows up.) 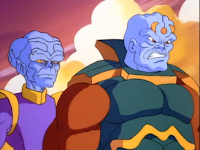 There's some odd animation in this episode, specifically around body language and facial features. Everything is exaggerated. Sometimes it works, like Marsala's dream sequence. But often times it looks odd and out of place.

Lysander (and one of the other Neo Megas) doesn't seem to have a forehead tattoo. This is the only time in the series any Neos don't have one, Neo Mega or otherwise. Seems like an odd design choice. 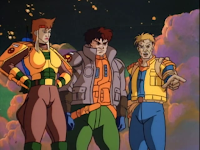 Watch for: The resistance member slogging up the mountain with Bronsky and Torres is the same guy Nara encountered when Draconis had raided the resistance and used them for slave labor.


By this point, anyone paying attention knows that Phaeton is, in fact, suffering from early stage Auto Mutation Syndrome. That fact will continue to be a driving force for the series. 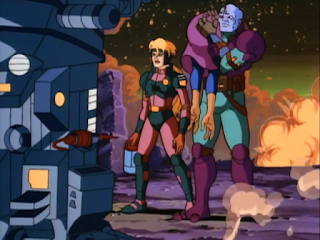 And, naturally, the captured mutating-monster-who-looks-like-a-mega will be dealt with soon, next episode in fact.

Overall: A strong episode. There's some great imagery and powerful character moments. The liberation of Venus plotline is a welcome continuation of our heroes being on the offensive. Phaeton's illness has now been adequately telegraphed, in a way that doesn't hit you over the head with it. And the Neo Megas continue to be smarmy bastards who antagonize the Neo Sapien command structure.
Posted by Jimtron at 1:56 PM