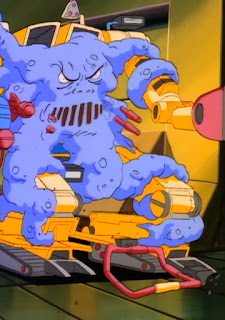 "This may only be the beginning. Worse things than thatc reature may be waiting out there. Neo Sapien science created that--who knows what else they may be capable of?"

Flesh Crawls is the twenty-sixth episode of Exo-Squad, and marks the halfway point of the series. Hollis and a Pirate Destroyer come to Venus to transport mutagen and shape-shifting monster they think is a Neo Mega back to Chaos. Things quickly go awry, and DeLeon, Weston, Hollis, and the survivors of the monster's attack are forced to blow the ship to stop the creature's rampage. 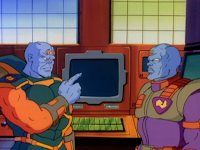 What works:  This is a weak episode, but some parts of it work. The episode opens with a flashback to The First Step, from Thrax's point of view. He we see him get demoted by Draconis and manning a shuttle. Quite a fall from the ace who was second in command of a planet. (But see below). It's also a slick transition, to see him heading down to Venus and then Hollis use his sensor shadow to get down to the resistance and reconnaissance team. 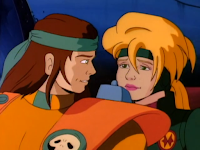 It's good to catch up on Hollis, see how he's doing. I'm not going to ding them for the leniency Simbacca has shown him, that was already covered in Inner Dark. He gets his flirt on a bit with Nara, but Weston shoots him down fast. He's the second in command of the ship, and the show does a good job of showing him as a leader, in his element, taking command. 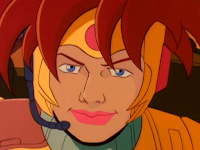 As for Weston, she seems to be bonding more with DeLeon. She's a good character, it's nice to see them focus on her a bit. I also love her sudden, savage punch when she thinks Hollis is a traitor.

I like that they kept the supposed Neo Mega sedated. Torres already surmised that they can communicate over long distances by unknown means. We don't really know if they've cracked exactly how yet, but sensible that they'd take no chances either way.

What Doesn't: This episode doesn't have much going for it. The DeLeon/Weston/others fight off a monster on a ship has been done before, quite recently. There's even a reprise of the airlock scene. Now, granted, using the magnet on the mutagen container is a better solution than the wrench, but it winds up feeling repetitive. 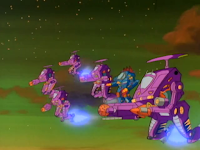 The fight scene between the squad and a Neo patrol was perfunctory and devoid of tension. That seems to be a bit of a pattern recently, probably a result of the format of the show. I do miss the first season, though, where every fight seemed to matter and the outcomes felt more in doubt.

Just a nitpick, but during Thrax's flashback, Draconis seems to chew him out from the Neo base on Mercury. It should, of course, be Venus. Another odd choice was that the flashback was mostly devoid of dialogue, which worked, but then the actual Takagi/Thrax interaction dialogue was used at that point in the scene. It felt like an odd choice. 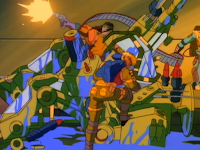 DeLeon, intent on blowing the ship, retrieves his fusion pack... from his E-Frame dripping in mutagen. No special precautions are taken either. He'd just seen it turn the shape-shifter into a giant tentacled face monster from getting splashed by it, so this feels incautious to me. Surely there are other ways to blow the ship.


After DeLeon convinces Weston that Hollis is innocent, she has an odd line, "people don't just change into other people." For all that odd things had been happening on the ship, that line hardly felt earned.

Oh, and since we're on the subject, when the monster assumes DeLeon's form right after that line, it apparently forms a working cyberjack for the machine to connect to. I can just about buy forming clothes that look real out of flesh, but working electronics is where I draw the line.

Perhaps the episode's biggest sin is that it's simply unnecessary. It adds nothing to the ongoing narrative outside of a couple of character moments. Shapeshifting monsters were established last episode. The liberation of Venus plot isn't addressed. Basically nothing much happens.

Watch for: Probably the most important event, big-picture story-wise, is Thrax going to Venus and establishing a somewhat adversarial relationship with Draconis. That will pay off in the near future.

The Weston/DeLeon relationship will continue to grow.

Overall: Weak. You could have cut this episode and, with a couple of minor edits to the last one, nothing much would be lost. In fact, this is probably my least-favorite episode of the series.