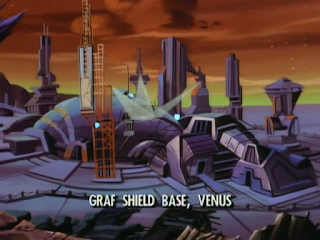 Behind the Shield is the twenty-seventh episode of Exo-Squad. Able Squad scouts on Venus note the reactivation of the GRAF shield facility, and escape to report back when the Neo Mega advising Draconis demands he pulls back his enormous offensive. They've set a trap for the Exo-Fleet, showing them what they want to see while a second GRAF facility has been built into the dome at Vespa. Able Squad takes out the wrong base but realizes it in time to warn the fleet. Simbacca, in a pique of brilliance or idiocy, orders the fleet to cloak, and the GRAF targeting system is unable to lock on, enabling the liberation of Venus to commence. 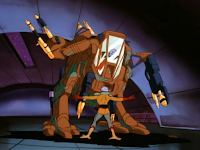 What Works: Man, the Neo Megas are smarmy. It's easy to see why Draconis despises them so. Their trap is good; despite DeLeon's realization of what's going on, they would have gotten the bulk of the fleet had not cloaking provided a way through. 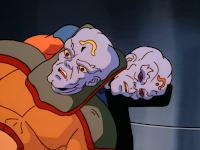 It's tremendously satisfying when Draconis decides he's had enough and hurtles Sallust into Illeal. And they had it coming, certainly. There was no reason for them to leave Draconis in the dark as to the plan. (OK, that left the audience in the dark too, but there are other ways to accomplish that.) I rather like the contrast between Sallust's blustering ("Phaeton will not allow this!") and Illeal's whining ("No, Draconis, you need us! Mercy!") With these two, along with the five from The Greatest Fear, Draconis has now disposed of seven (presumably, all) of the Neo Megas on Venus. Butcher. He's easily the most brutal of Phaeton's major Generals. 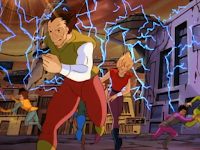 Their plan, too, seemed pretty reasonable. Hiding a GRAF facility inside the large dome at Vespa seems like the kind of leap a Neo Mega would make. Seeing the civilian population run from the arcing electricity was a nice image. 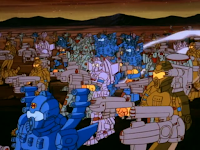 The invasion of Venus commences! (But see below.) It's incredibly satisfying, after watching our heroes get kicked in the teeth for 20 or so episodes, to see them legitimately going on the offensive. 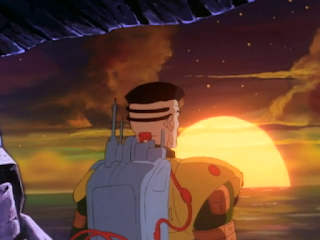 There's a nice montage of the team getting ready for the mission. One moment in particular stands out, where J.T. just appreciates Venus for its innate beauty. Nice that the show can find time for that.

We also get a hint as to the timeline; Draconis complains that Exo-Fleet reconnaissance has been active in the area "for months." I think it's safe to assume some time between the Pirate Alliance plotline and the First Step / Dogs of War events, so we're probably encroaching on year 2.5 of the war. 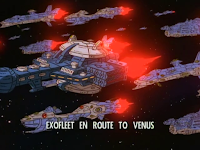 What Doesn't: The liberation fleet seems, visually, to be composted entirely of entirely of Exo-Fleet type ships, as opposed to Pirate vessels. They really should be around 80% Pirate.

In a similar vein, we've never seen Exo-Fleet ships cloak before. Now, it makes sense that that'd be the first upgrade you'd give to them, but it would have been nice to establish it. I don't think we see it too often again in the series either. Usually a cloaked ship is specifically flying Pirate colors.

Creon's armada of E-Frames, assembled to hunt down the spies (before Sallust calls them off) seems a little TOO huge to me. If the facility really was just a decoy, why would there be this many frames close by to summon? Minor nit, but still. 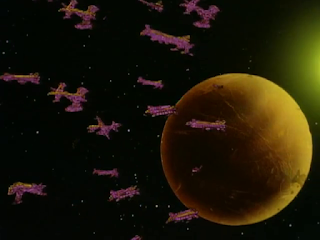 A bigger nit is that the Neos seem to have a large fleet defending the planet, a fleet which is nowhere to be seen when the Exo-Fleet arrives. Now, it makes sense that they'd probably choose not to engage, thinking the GRAF shield will handle the invaders. Still, I can't imagine that, once that plan failed, the Neos would let the Exo-Fleet have uncontested control of their orbit.

Watch For: This is the last use of the GRAF shield in the series, though I can't complain, it had a good run. GRAF tech WILL show up one more time, though, this time in a civilian capacity. (As is so often the case with weapons of war.)

Needless to say, the Liberation of Venus plotline has just begun and will continue to dominate the series for some time.

Overall: Much stronger episode than the last one. It does a good job of balancing a stand-alone plot with the greater story, as well as tying into the Neo Mega subthread that's been weaving in and out of the story ever since The Last Man. It ends on a note of unabashed optimism, a first for the series, and signals an important tone shift for the rest of the show. Exciting stuff.