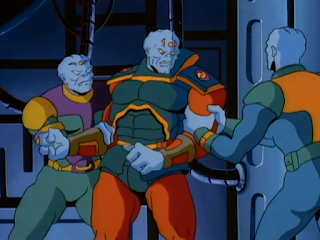 "Phaeton has chosen to rule through terror, but when everyone fears you, you must fear everyone."

Miracle is the twenty-ninth episode of Exo-Squad, continuing The Liberation of Venus arc. Mop-up operations on the ground are interrupted by the arrival of Phaeton's Neo Sapien fleet, flagged by the Olympus Mons II. Winfield has a plan to beat it, utilizing the Pirate fleet's cloaking ability to good effect, but when Barca sabotages the vessel things look desperate. Marsh takes a captured Neo Sapien shuttle and tricks his way on board Phaeton's vessel (by playing on Phaeton's mistrust of Draconis) and causes enough damage to allow the Resolute II to be repaired, and Winfield wins the engagement handily. Draconis betrays Phaeton, leaving him to die, only to discover that he's killed a clone. The original, looking significantly worse for wear, vows to have Draconis replaced. 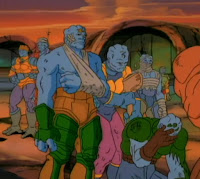 The Good: A *LOT* happens this episode. Right from the beginning, we're shown scenes of the Neo Sapiens who have lost. I love how beat up they are, and how their attitudes seem to vary from despair to resignation to outright anger. It's nice that some of them are women, too.

Marsh and DeLeon interrogate the captives, asking for supply depots and fallback positions. Their premise is that victory is inevitable and that this info will save lives. That may be true, but the Neos stand fast (with a little bit of pressure from the more unyielding ones on the ones who look tempted to break,) which is a nice change of pace from heroic protagonists and weak-willed antagonists. 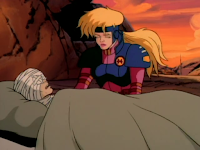 Nara's moment to shine is weeping over James getting shuttled off. It sounds and looks bad, with talk of him losing his arm and maybe his sight. That's pretty heavy stuff for a kids cartoon. And James has yet more trials left ahead of him.

Marsala seeks to physically comfort Nara, but again can't quite bring himself to do so. He fears rejection perhaps. I love his hand shaking, followed by a tentative extension of his fingers before he pulls back, unable to make the gesture. 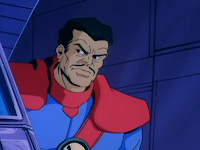 Barca makes a brief but important appearance. He has apparently once again established contact with Phaeton, which feels reasonable after several months. The bomb he plants in the Resolute II's engines provide the main impetus for the story. It'll definitely be satisfying to see him finally get his. 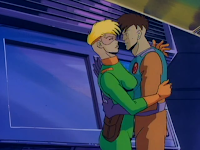 Nice detail... there's a random couple of extras making out in front of where he planted the bomb. (Don't worry, they walk off giggling before the detonation. Even Exo-Squad isn't quite THAT cruel.) I love little touches like that; it makes the universe feel lived-in.

There is a beautiful panning shot of the Neo fleet that just seems to go on and on and on. Seriously, look at it. That's maybe 8, 9 screen shots composited together. It's not static either, some ships zoom past the camera, and engines flare up and die down.

That fleet is about to get hit by a Pirate / e-frame ambush. I've loved the cloaked docking bay launch sequences before, but this episode does it better than any before or since. (But see below.) Takagi joins them and we get a brief but exiting bit of e-frame vs capital ship battle. The Neo's don't seem to be launching e-frames, probably for economy of story telling, though that's a slight flaw. Still, definitely a good battle. 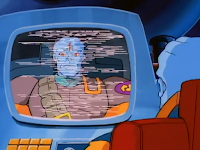 It's not enough, though, so it's a good thing Marsh is ready with a plan. With a captured shuttle Bronsky has found (his e-frame wrecked by Thrax) and Marsala in a Neo uniform, they manage to bluff their way onto the flagship. I love how they do it, by claiming to have info proving Draconis a traitor. It's the perfect ruse, and results in Draconis getting sidelined for most of Able Squad's incursion. (But see below.) 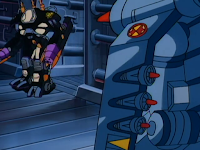 There are several hints the Phaeton clone isn't what he appears to be. In addition to his too-good health, he has a few odd lines which make sense in retrospect. He stresses the word "me" too hard when saying that Marsh won't defeat him, and then refers to Phaeton in the (apparently) third person. (But see below.) It's also a nice bit of playing with the audience expectations. When I first watched it, I genuinely thought they might have just flubbed which character model they were using for Phaeton. It's nice that everything was fully intentional. 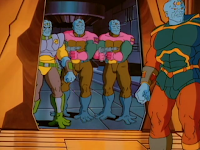 It's great that, right after Draconis is apparently vindicated, he turns around and betrays the Phaeton clone. Good old Creon doesn't need specific orders to know what to do, he blasts Phaeton's guards as they try to board and leaves the (apparent) ruler of the Neo Sapien Order to go down with the ship. It's an excellent role-reversal. 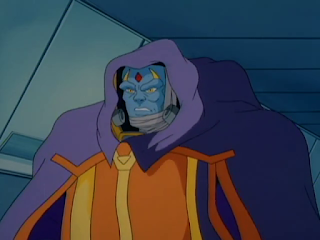 Phaeton's appearance at the end of the episode is terrific. Bandaged up, wearing a cloak... he's deteriorated significantly further since last we saw him a few months back. (In The Dogs of War, for those keeping track.) 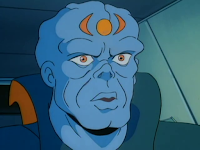 Draconis's facial expression when he sees Phaeton alive and well--uh, alive, anyway, is priceless. It only lasts a few frames but he looks totally stunned. 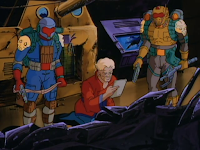 Finally, since I'm a huge fan, I'll point out that Algernon once again shines. This time he's fixing Barca's sabotage. "Spaceship repair is hardly my forte... though I suppose I am better at it than anyone else." I love the Pirate engineers assisting him.

The Bad: Some details just feel off this episode. Leaving DeLeon behind to guard the shuttle feels like an odd choice, given his computer expertise. Torres or Marsala would seem the better call. 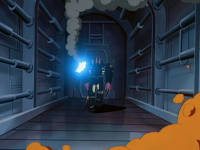 The Phaeton/Marsh rematch is something of an anticlimax. Bronsky pulls him off Marsh, which worked well, but then Weston shoots him and he stalks off, sparking. For someone who was willing to shoot a shuttle of his own men for not fighting to the death, and a clone to boot, he gives up a little easy. Which brings us to...

Phaeton ordering Able Squad's shuttle destroyed, on the grounds that they should have fought till the end, feels cartoon villainous to me. I can see Draconis doing it, he's a butcher, but Phaeton has always striven for logical decisions. A shuttle from Venus full of e-frames or soldiers or officers or scientists could easily be more valuable with the fleet than needlessly sacrificing themselves in a lost battle. 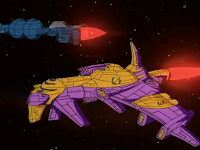 After the impressive showing last week, the Olympus Mons II seems to be large, but still in-scale, with the other Neo ships. It's also about the same size, if not smaller, than the Resolute II.

There's an odd beat where Phaeton demands to know when they'll be in range, followed by a cut to the exterior of the ship and Draconis declaring them to be in range. Tiny detail, I know, but it feels odd. Given how tight the episode was, this feels like a pair of scenes that could have been condensed.

When the vessels towing the Resolute II away cut their lines, the Resolute seems to fall backwards. Even if they were towing it up out of Venus' gravity well, which isn't at all clear, the visual would be subtle at best.


Also, and this is a bigger deal because it's not a visual flub but a story one, Winfield is too fatalistic about the Resolute II going down. Sure, it'd be a blow, but there's no reason he'd have to go down with his ship. One imagines there are shuttles, and we know they have life pods. 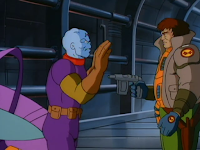 The Neo whose frame Bronsky commandeers is shorter than he is! Oops! I do like Bronsky's heroism of running into the danger to help spring his squadmates.

It's a bit of a stretch to think that Phaeton would trust his own clone. What's stopping the clone from deciding that perhaps a healthy Phaeton would make a better leader? 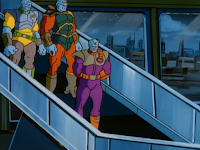 Watch For: James and Thrax both have more story left in them. James' story will conclude soon, Thrax will disappear for awhile before returning to prominence. It's slightly contrived that Draconis has saved him, but at least they lampshade it by having Draconis acknowledge it. Thrax is being saved for a public execution to help Draconis secure his spot as the new ruler of the Neo Sapien Order. (Though, the guy who just lost his planet may have a weaker claim than Typhonus, who is doing just fine on Mars, thank you very much.)

It's hardly worth saying, but Phaeton's new look heralds bad things for him. 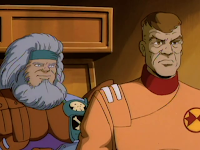 Winfield gets his old coloration for a few frames, speaking of using the wrong character model.

Bio: Marsala. Again. Since he's not especially prominent this episode, and we've seen it before, it doesn't work especially well.

Overall: Very strong episode, marred slightly by a few odd choices and visual gaffes. Venus is now solidly liberated, though the show will devote a couple of episodes to the aftermath, which is also a nice touch.
Posted by Jimtron at 9:31 AM

Near the end of Miracle episode, there are about 20 to 40 Neosapien spaceships in Earth orbit that comprise the Neosapien Earth Fleet, and see my comment on The Price of Courage episode review.